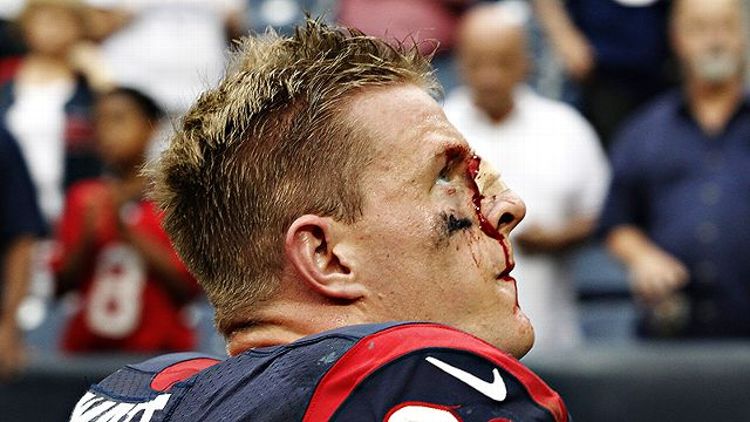 So, this is happening. It doesn’t get much better than the NFL’s best defensive lineman against the NFL’s best offensive line. I’m putting this game right up there with Gravity in terms of making me think about the vastness of the universe and mankind’s place within it.

The Niners’ line played its best game of the season last week against St. Louis as San Francisco seemed intent on committing to its running game. Frank Gore’s were the most he’s had in a game since Week 14 of the 2009 season, and his 7.65 yards per carry was the 10th best mark of his career.

Watt will spend most of the day dealing with guards Mike Iupati and Alex Boone, both of whom were Pro Bowl–level players a year ago (Iupati went; Boone did not). Boone was one of the better run blockers in the entire league last season. He’s a massive 6-foot-8 mauler, but he occasionally struggles in pass protection. Watt doesn’t struggle with anything.

I mentioned on today’s edition of the Grantland NFL Podcast that I think Watt faked his bloody face situation last week as part of an ongoing attempt to convince us that he is not a cyborg. At this point, the blood and the elbow brace are the only indications otherwise. Watt’s 2012 might have been the best season any defensive lineman has ever had. His 56 defeats were a full 11 more than Ray Lewis had in 1999, which was previously the best total Football Outsiders had ever charted. It was not of this world.

All Watt has done through the first four games of this season is pick up where last year left off. Watt’s 2012 line (according to Advanced NFL Stats): 68 tackles, 22 sacks, 16 passes defensed, 43 quarterback hits, and 39 tackles for loss. His current pace this season: 68 tackles, 16 sacks, 12 passes defensed, 40 quarterback hits, 32 tackles for loss. If last season was the best by a defensive lineman in NFL history, this one would be a close second. Sack numbers can fluctuate for any player from year to year, but overall, Watt’s utter dominance is on the same level it was a year ago.

His performance against Seattle was right up there with his game against the Colts last year as the best of his three-year (J.J. Watt is 24!) career. If this keeps up, there’s no reason Watt shouldn’t win his second straight Defensive Player of the Year award. The list of players who’ve done that isn’t a list. It’s Lawrence Taylor, and no one else.

Sneaky Good Games of the Week

Lions at Packers, 1 p.m. EST
Seahawks at Colts, 1 p.m. EST
As of today, both the Colts and the Lions sit at 3-1 and atop their respective divisions, but I’m not sure how much we really know about either team.

Detroit blew out the Vikings and Bears, lost to the Cardinals, and struggled with the Redskins. On offense, the Lions have looked like a playoff team when Reggie Bush has played, and like a middling group desperate for additional receiving help when he hasn’t. Green Bay is likely getting safety Morgan Burnett back from injury this week, which should help deal with Calvin Johnson and the faceless, nameless group of receivers the Lions trot out with him. Last week, the Fox graphic for new no. 2 wide receiver Kris Durham pointed out that at 6-foot-6, he’s the tallest receiver in the league. Good to know, guys. Thanks.

On defense, Detroit has consistently had problems with Aaron Rodgers and the Packers. Green Bay is 9-1 against the Lions since Rodgers became its starting quarterback, and the success there seems to be more than just random chance. The Lions’ weakness in the Schwartz era has been its secondary, and few teams are better equipped to take advantage of that than the Packers. Through four games, the Lions look to be a much-improved, possible contender, but the biggest holes on the roster are still in the defensive backfield. If they can’t bother Rodgers with their front four, it’s going to be a very long day.

For the Colts, a win on Sunday — in any fashion — would mean that Indy has to be considered both the class of the AFC South and a likely candidate for the playoffs. What they were able to do against San Francisco two weeks ago was mostly a product of the improved play by the offensive line, which is actually without starting guard Donald Thomas. The question that remains for the Colts is whether they can replicate that game against a very good defense that’s at full strength. Aldon Smith’s looming suspension clearly played a part in his performance, and the 49ers lost Patrick Willis at the most critical point in the game.

This is the first week the Seahawks defense will have all its pieces back in place. The criminally underrated Michael Bennett is fine after a scary back injury last week, Brandon Browner finally looks healthy, Chris Clemons played well against the Texans in his second game back following last year’s ACL tear, and Bruce Irvin is back after a four-game suspension. Seattle’s biggest problem on defense really is figuring out how it’s going to get all its talented, productive players on the field. (That is not an actual problem.)

Even if both teams lose, Green Bay and Seattle are the sort of measuring sticks that will help us learn at least a little bit more about the outlook for both the Lions and Colts moving forward.

Credit is due in several places for New Orleans’s defensive turnaround this season (starting with Rob Ryan and working down), but Vaccaro has definitely been part of it. He’s playing every snap for the Saints while lining up in a variety of different spots, and as the year goes on, Ryan is likely to only get more creative with him. Sunday provides a good chance for his second career interception, as Jay Cutler seems to be in the mood to throw the ball to the other team lately.

Riley Reiff, T, Lions
One player we’ll be going out of our way to watch for at least 10 plays.

For more than a decade, there was never a question about the Lions’ left tackle. From 2001 to 2011, Jeff Backus started 176 straight games for Detroit, missing his first game as a pro in his final season at the age of 35. With Backus’s retirement this offseason, the Lions had their first turnover on the blind side in a long time, and how Detroit’s new pair of tackles would perform was the great unknown about the Lions’ offense.

Just looking at the numbers so far this year, it seems like Riley Reiff, whom the Lions took in the first round last season as a long-term replacement for Backus, has played well. Detroit has the best Adjusted Sack Rate in the league, according to Football Outsiders. For as much as Matthew Stafford and the Lions throw, Stafford has only been sacked four times. Part of that, though, is Stafford, who was sacked at a lower rate than any quarterback in the league a season ago. No team in the NFL lined up in the shotgun more than the Lions did last year (71 percent of plays, according to Football Outsiders), and it helps Stafford get rid of the ball faster than any quarterback in football.

Last week, Reiff had his hands full with Julius Peppers, who has one of those four sacks Detroit has given up on the season. It won’t get any easier this week, with Clay Matthews coming off a bye week that should have him back near full strength. Like Drew Brees and Peyton Manning, Stafford does a great job of making his line look good. I’m curious just how good.