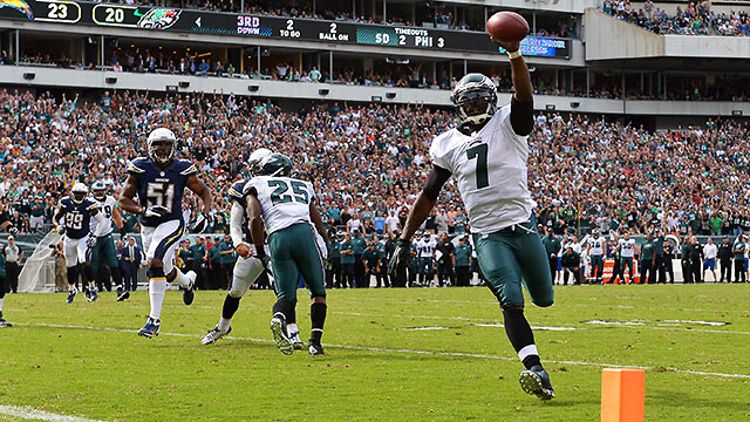 Michael Vick had an incredibly productive game on Sunday, and his stats don’t begin to tell the story. While a line that includes 428 yards, a 63.9 completion percentage, two passing touchdowns, and one rushing touchdown is certainly nothing to scoff at, it’s veritable chump change compared to what Vick left on the table.

The three plays listed above — a would-be 68-yard touchdown that DeSean Jackson caught with his right foot slightly out of bounds; a 37-yard touchdown to Jackson that was nullified because of a penalty on tackle Lane Johnson; and a would-be 79-yard touchdown that Jackson juuuuust missed — all could have easily gone the Eagles’ way, turning a defeat into victory and Vick’s 33-point fantasy performance into a 40- or even 50-point day.

Regardless, it’s more clear than ever that Chip Kelly’s coaching can bolster his offensive personnel’s fantasy value, largely because of the sheer amount of plays Kelly tends to run per game. More plays mean more chances to gain yards and score points, and not surprisingly, the Eagles are third in the NFL in points scored and second in total yards through two weeks.

Of course, more plays also mean more chances to get injured, and the most salient takeaway from the Eagles-Chargers game was that Vick got “shaken up” by Chargers defensive end Jarius Wynn late in the fourth quarter, triggering a Nick Foles appearance. Granted, Foles’s one play (an incompletion) was mandated by league rules, but it was surely a sobering sight for Vick owners, who would have to be a remarkably naïve bunch not to believe they’ll be seeing a lot more of Foles as the season progresses.

Given Vick’s recent injury history, heavy early usage, and peak value as the third overall player in fantasy points, his owners would be smart to deal Vick now and let someone else stomach the inevitable injury struggles or defensive adjustments. Aside from in 16-team leagues, Vick likely wasn’t drafted as a starter anyway, so owners should be able to part with him without worrying about plugging in a replacement. Keep in mind that the owner looking to acquire Vick will likely be wary of the injury risks, too, so don’t make the mistake of seeking a king’s ransom. Grab a rising running back or a steady wide receiver (say, Giovani Bernard or Steve Smith) and gain considerably in the long run.

• The Chris Shelton Award for Unsustainable Greatness: WR Eddie Royal, San Diego Chargers. In 2006, Detroit Tigers first baseman Shelton, who was pretty much a lackluster prospect in every possible way, got off to an inexplicably sizzling start, becoming the first player in baseball history to hit nine home runs in the season’s first 13 games. Sadly, Shelton belted only seven homers from Games 14 to 104, and was unceremoniously optioned to Triple-A at the end of July. (Semi-related: Wikipedia claims Shelton is Alex Smith’s cousin, which should make everyone highly suspicious of the Chiefs’ playoff hopes.)

Carrying on the Shelton tradition is Chargers wideout Royal, who boasts a league-leading five touchdowns on just 10 receptions. Although Royal is on pace to obliterate Randy Moss’s single-season record of 23 touchdown receptions, I’ll go out on a limb here and say the lethal combination of Philip Rivers (sure, he had a fantastic game on Sunday, but when he’s off, he’s really off) and Ryan Mathews (who’ll be lucky to survive another game completely unscathed) will prevent the Chargers from scoring consistently over their remaining 14 games, shattering Royal’s dreams of a 40-touchdown year. Royal is available in 86.5 percent of ESPN.com leagues, so feel free to milk the hot streak dry, but understand that he’ll revert back to the Eddie Royal of yore sooner rather than later.

No one in the NFL has more red zone targets this year than… Eddie Royal. 7 of his 14 targets have been in RZ.

• The “We Get Two Points Per Interception, Right, Guys?” Award: QB Eli Manning, New York Giants. FUN FACT: Eli outscored Peyton in 2PPI leagues this weekend, so there was at least one silver lining for Giants fans and Eli owners after Manning Bowl III.

• The Richard Sherman “U Mad Bro” Award: WRs Aaron Dobson, Julian Edelman, and Kenbrell Thompkins, New England Patriots. Seattle’s Richard Sherman is very skilled at making folks mad. Though he made headlines this weekend for his ongoing beef with his former college coach, Jim Harbaugh, Sherman’s greatest achievement in the field of enragement is still trolling Tom Brady on Twitter:

At that point in time, Bill O’Brien was the only other human to have rendered Brady emotional, so Sherman’s feat was worth commemorating, at least in fantasy football columns.

Now we can add Dobson, Edelman, and Thompkins to the list along with Sherman and O’Brien, because their performance on Thursday night had Brady going totally and hilariously apeshit. In fact, the receivers made Brady so mad that he vowed in the postgame presser to “do a better job with [his] body language,” which is great, because listening to a lot of Jesse McCartney is a surefire way to win more football games.

Edelman remains valuable going forward, especially in PPR leagues, but Dobson and Thompkins are too big-play dependent and otherwise inconsistent to warrant starting spots in fantasy leagues right now. Keep them on the bench, pray that they develop a better rapport with Brady, and then plug them in when necessary.

• The Flexy and I Know It Award: RB Giovani Bernard, Cincinnati Bengals. Bernard made the most of his 10 opportunities (eight carries and two targets) on Monday night, rushing for an impressive 38 yards (including a seven-yard touchdown) and turning a short check-down pass from Andy Dalton into a game-sealing 27-yard touchdown reception. While BenJarvus Green-Ellis accrued his standard 75 yards on 22 carries, Bernard demonstrated why the Bengals made him the first running back chosen in the 2013 draft: extraordinary burst and tenacious cut-back ability. Bernard is already an above-average flex play, but he has RB1 upside once his workload inevitably increases.

• The Vulture of the Week Award: RBs Brandon Jacobs and Da’Rel Scott, New York Giants. Jacobs, who likely spent Week 1 of the NFL season playing video games on his couch, scored a one-yard touchdown against the Broncos and appears to have established himself as the Giants’ goal-line back. Except for when Scott randomly replaces Jacobs, that is, as Scott did on one possession Sunday. Remember the Giants’ fearsome Earth, Wind, and Fire trio of 2008, which included Jacobs, Ahmad Bradshaw, and Derrick Ward, all of whom were terrific fantasy options? Well, the David Wilson/Jacobs/Scott timeshare will be absolutely nothing like that. Call them Pluto, Breeze, and Ash instead.

1. WR DeAndre Hopkins, Houston Texans (available in 36.6 percent of ESPN.com leagues). Andre Johnson’s playing status will be “an end of the week decision,” as he suffered a concussion Sunday inflicted by (surprise, surprise) Bernard Pollard. Hopkins ably replaced Johnson as Matt Schaub’s primary target in overtime, but Hopkins’s fantasy value is in no way contingent upon Johnson’s health. Hopkins tallied respectable numbers (five receptions, 66 yards) in Week 1 despite Johnson’s presence, and the rookie is probably better off not drawing coverage from the opposition’s top corner anyway. He should be owned in every fantasy league on the planet by tomorrow, in large part because of his rad middle school buddies.

2. WR Marlon Brown, Baltimore Ravens (95.1 percent). As we expected, Brown feasted on Cleveland’s secondary Sunday. Tougher matchups loom on the horizon, and the Baltimore offense looks really mediocre so far, but with Jacoby Jones likely out for at least another month, the 6-foot-5 Brown will receive his fair share of targets. Moreover, if he plays well enough, there’s a chance he’ll simply usurp Jones on Baltimore’s depth chart, Dancing With the Stars notoriety be damned.

3. RB James Starks, Green Bay Packers (93.8 percent). Starks’s value is directly tied to Eddie Lacy’s health, but dependable running backs are so hard to come by that Starks is a smart waiver claim this week regardless of how quickly Lacy returns from a concussion. While it would be foolish to expect another 132-yard performance out of Starks, an offense as potent as Green Bay’s should give Starks plenty of red-zone opportunities.

4. TE Charles Clay, Miami Dolphins (99.2 percent). Before Dustin Keller demolished every knee ligament known to man, he was expected to be a major factor in the Dolphins’ offense this season. Curiously, however, replacement Clay received little to no buzz when Keller went down, and didn’t even register an average draft position on ESPN.com. Nonetheless, Clay has proven himself a decent option through two games, grabbing 10 balls for 163 yards. And as a bonus, he’s currently Miami’s goal-line running back, which resulted in a rushing touchdown on Sunday.

5. RB Bilal Powell, New York Jets (62 percent). Recommending Powell to you guys goes against everything I’ve ever believed in, which should really hammer home the point that running backs are a scarce commodity. Still, Powell carried the ball more times than backfield mate Chris Ivory did against New England, and the Jets won’t be passing for a touchdown anytime soon. Don’t get me wrong: I hope you never, ever have to start Powell, but there’s no harm in letting him ride your bench as insurance for your flex position.