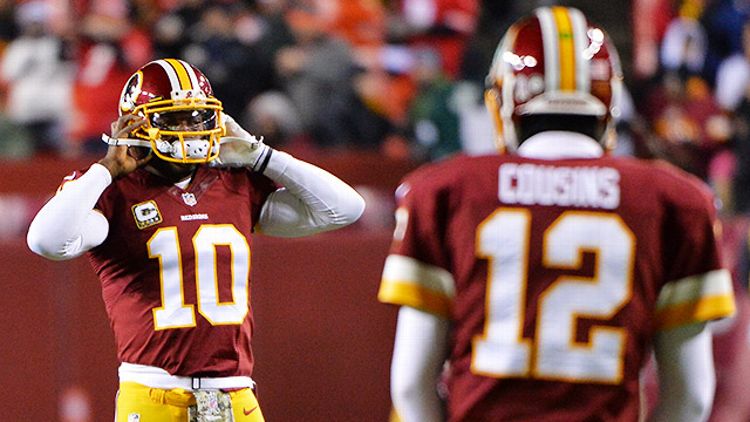 Mike Shanahan is about to be out of a job, so prepare now, Alfred Morris owners, for one final dose of Shanahanigans before the season ends.

The coach clearly wants to go out with a bang, and his scorched-earth policy regarding the world’s fantasy teams will grow only stronger as we near Week 17. You are in immediate danger; give your loved ones a hug and, more importantly, start stockpiling all Redskins running backs, past and present (and maybe even future), in case Shanahan empties his bag of tricks. As an above-average fantasy owner once said, “By failing to prepare, you are preparing to fail.”

THIS JUST IN: Mike Shanahan today says he won't commit to RGIII as his starting QB for Sunday. Says he'll make his decision in next 48 hrs.

This is the new plan:

What a stretch for Sparty! First, Michigan State landed a Rose Bowl bid; now, former MSU QB Kirk Cousins might emerge as a crucial figure in the fantasy playoff semifinals. In the event that Cousins starts, the good news is that he’ll get to face the Falcons’ wretched defense. Also, he’s available in 99.8 percent of ESPN.com leagues. That’s the end of the good news. The bad news is that Cousins will have one of the league’s worst pass-blocking lines “protecting” him, and his team has basically given up on the season. There are many, many other negative facts I could list about the 2013 Redskins, but I don’t want to obliterate my word limit.

Coincidentally, RG3 missed Week 15 last year, too, paving the way for the only regular-season start of Cousins’s career. He played fairly well (329 yards, two touchdowns, and 21 fantasy points), but again, the Skins are in a totally different (read: much, much worse) place now than they were then. Start Cousins at your own risk, because lord knows what Shanahan will do to kill Cousins’s fantasy value. I’d sooner depend on Flynnsanity.

Where we commemorate the week’s most elite fantasy performances with some phenomenally prestigious honors.

• Step Right Up, Mr. Vereen: Rob Gronkowski’s ACL tear means that we’re back to square one with the Patriots offense. In case you’ve forgotten, square one includes the following things:

• The man, the myth, the legend: MICHAEL HOOMANAWANUI

Thompkins and Dobson have recently been sidelined with hip and foot injuries, respectively, and if they continue to miss time, Julian Edelman will remain a solid WR3. However, the guy who stands to benefit the most from Gronk’s absence will be Shane Vereen, who’s unquestionably Brady’s favorite healthy target. To wit, here’s what one post-Gronk Patriots drive looked like on Sunday:

Vereen totaled 12 receptions on the day for 153 yards, making him a recommended start not just in PPR leagues, but in standard ones as well. Consider any rushing stats he accrues a nice bonus.

I wouldn’t say the weather in Sunday’s Lions-Eagles game was conducive to running the ball, because that sort of blizzard isn’t conducive to anything save for an Inuit uprising. It certainly wasn’t conducive to the passing game, though. Nick Foles, history’s most accurate passer, actually threw an interception, so you can imagine how rotten the conditions were. There are, like, five different filthy LeSean McCoy GIFs from which to choose, and the one you see above was selected merely because it was the safest for work. After tallying 217 yards and two touchdowns, McCoy now trails only Jamaal Charles on the points leaderboard, and the Eagles’ remaining schedule (at Vikings, Bears, at Cowboys) is pretty damn easy from a run-defense standpoint.

Meanwhile, Reggie Bush aggravated his calf in pregame warm-ups and was an unexpected scratch, likely ruining thousands of fantasy seasons in the process. He’s day-to-day and should play against the Ravens on Monday night, but that’s little consolation if your squad’s already been eliminated.

• Seriously, Who Needs Jay Cutler? If last night marked the end of the Josh McCown era, let the record show that he went out on top — literally. McCown posted a near-perfect QBR of 99.1 despite massive gusts of wind, finishing as Week 14’s highest-scoring player and hilariously triggering buzz of a quarterback controversy in Chicago. McCown even drew a rave review from that most curmudgeonly of critics, Martellus Bennett.

Martellus Bennett said McCown had a Favre-type TD: "Old white quarterbacks all do the same thing when they score." I miss covering this guy.

In short, Marc Trestman is still a god, and so is Alshon Jeffery. Cutler will be just fine whenever he returns.

• Still Destroyin’ Worlds: Count out Bobby Rainey at your own peril! Coming off two lackluster showings, the former Challenge of the Week superstar exploded for an 80-yard touchdown run on the Bucs’ second play from scrimmage. When I saw this scroll across CBS’s ticker, I was beaming like a proud papa, and I don’t even own Rainey. He followed up that 80-yarder with 47 more rushing yards, good for 18 fantasy points on the day, and was courteous enough to cede the spotlight to Brian Leonard and Michael Hill as the game wound down. Mike Glennon was mediocre once again, but he did outscore Matthew Stafford (AGAIN), and that’s something we can never take away from him.

• Cold-Weather King: Even though Peyton Manning has delivered consecutive 30-plus-point performances in frosty conditions, I for one still question his ability to play well in the cold. Weather.com is calling for a low of 28 degrees on Thursday night, when the Broncos host the Chargers, and I’d consider benching Manning just in case he cracks like an icicle under all that pressure. Geno Smith is widely available, as is Kyle Orton. With Johnny Drama likely switching to a Matt Prater–based offense, those guys might be your best hope for a Week 15 win.

1. RB Toby Gerhart, Minnesota Vikings (available in 99 percent of ESPN.com leagues): Some say there’s a “glimmer of hope” that Adrian Peterson plays against the Eagles, but ESPN’s Ben Goessling isn’t buying it. It looks like Peterson will sit this one out (and really, why would the 3-9-1 Vikings risk their workhorse’s health for a meaningless Week 15 game?), so expect to see some real lunch-pail road grading from Gerhart in Peterson’s stead. Gerhart is a solid bet to see 20 carries if he starts, and ICE BALLS won’t be an issue in the Metrodome.

So You just enjoying the game & the next thing you know ur hit in the face with a ball of ice correction not snowballs ICE BALLS.

2. TE Dennis Pitta, Baltimore Ravens (98.6 percent): Here’s a surefire way to piss off the Gronk owner in your league: claim Pitta. According to Peter King, Joe Flacco “was walking around the Ravens’ complex looking disconsolate” after learning of Pitta’s dislocated hip back in July, so it’s no wonder the QB targeted Pitta 11 times on Sunday. Flacco and Pitta are best bros, and they’re making up for lost time! You don’t have to worry about Ed Dickson, who, despite his Week 14 touchdown, has been supplanted by Pitta on the Ravens’ depth chart. And if you are your league’s Gronk owner, I sincerely hope you have a high waiver priority this week.

3. RB Daniel Thomas, Miami Dolphins (94.8 percent): Lamar Miller’s status for Week 15 “remains up in the air,” but he was able to practice some today, which is why Thomas doesn’t top our list. True, Thomas was impressive in Pittsburgh, toting the rock 16 times for 105 yards and a touchdown, but that won’t matter if Miller passes his required concussion tests this week. Nevertheless, whoever starts for the Dolphins will get a tasty matchup against the Patriots’ abysmal run defense, so claim Thomas just in case.

4. WR Da’Rick Rogers, Indianapolis Colts (99.9 percent): It’s tempting to say that Andrew Luck ended his slump in Cincinnati, what with the four touchdowns and 32 fantasy points. At the end of the day, raw numbers are all owners really care about. But as Christopher Harris notes, Luck was 8-for-16 for 77 yards through the game’s first 35 minutes, at which point the Bengals had built up a commanding lead and were content to let Luck complete short, clock-draining passes, which is how he finished with such a superb (albeit misleading) stat line. The best thing about Luck’s performance, really, was how often he targeted Rogers, on whom I’ve been bullish ever since he looked like the best NFL prospect on a Tennessee receiving corps that also featured Cordarrelle Patterson and Justin Hunter. Off-field issues stunted Rogers’s development in college, but your fantasy team is a just-win-baby operation. He’s worth a flyer, if only because his sole competition for fantasy points is LaVon Brazill and Darrius Heyward-Bey.

The first choose-your-own-adventure Challenge in the history of the universe was a rousing success — so much so that I wouldn’t be surprised if Willis McGahee, Chris Ogbonnaya, and Fozzy Whittaker were among the week’s most-added running backs.

@mattborcas only 3rd time this year to top 100, good week for it pic.twitter.com/GJGXJNuWsS

@mattborcas I took the Cleveland challenge and destroyed. Note that I sat LeSean McCoy and Rod Streater to play… pic.twitter.com/9VJqL9hE6Y

@mattborcas true dedication and the win against the bye week pic.twitter.com/wpmYxYO23H

As the fantasy season comes to an end, it’s important that we increase the Challenge’s difficulty level in the precious two or three weeks we have left, so I’d recommend putting in a claim for Kirk Cousins now. He’ll make for our toughest Challenge yet, especially if he doesn’t start.

No, Mike Shanahan, This Is How You Get Fired ...