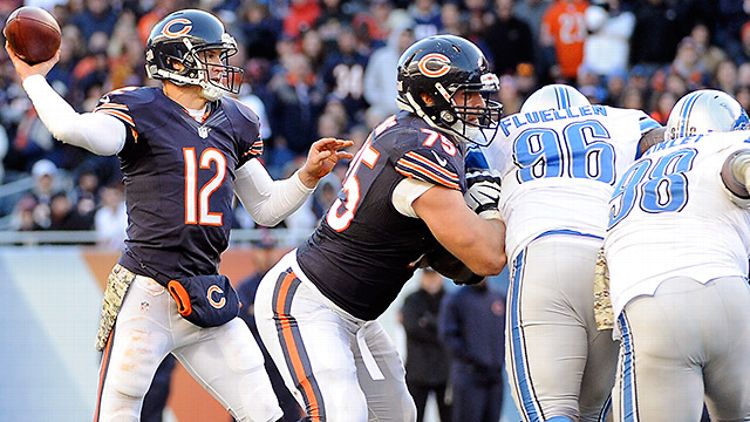 Forrest Gump’s mother has clearly never played fantasy football, because the only way life is like a box of chocolates for a fantasy player is if that box exclusively contains torn ACLs and first-round busts. I mean, even the good chocolates eventually succumb to fractured ankles, or something. The fantasy pitfalls can sometimes seem endless, which is why you need a comprehensive blog post to steer your team through the dangers that lie ahead. Luckily, that’s exactly what you happen to be reading!

1. QB Josh McCown, Chicago Bears: Let’s stop doubting the quarterback whisperer, OK, guys? McCown is available in 97.8 percent of ESPN.com leagues, yet is a smarter start in Week 11 than the widely owned Colin Kaepernick, Matt Ryan, and even Robert Griffin III (more on RG3 later). McCown is not the greatest gunslinger in the world, but he’s Marc Trestman’s gunslinger, which is the key. Trestman could get solid production out of a cadaver.

McCown notched 15 fantasy points against Washington (despite playing just two full quarters), 20 against Green Bay, and six on one drive against the Lions. He distributes targets fairly evenly among his receivers and boasts a pristine 7.69 yards per attempt. Against a Ravens defense that allowed five passing touchdowns to Jason Campbell and Andy Dalton the past two weeks, McCown could finish the week as a top-five quarterback. And if he does, don’t forget to purchase a signed Trestman poster to commemorate the occasion!

2. RB Shane Vereen, New England Patriots: When it’s all said and done, 2013 may well go down as the year that Riverboat Ron ascended to the rank of Galactic Emperor and forced us commoners to live under totalitarian rule. With Luke Kuechly and Star Lotulelei and the rest of a defense that’s surrendered just 11 points per game over the past five weeks at Rivera’s side, staging a coup wouldn’t even be hard. I readily admit all of this, but I still think the Patriots might score at will on Monday night.

Hear me out. I don’t know what Bill Belichick does during bye weeks, but it’s probably illegal in most states, seeing as his Patriots are 10-3 and average more than four touchdowns per game coming off byes. When we last saw New England, the offense finally looked like its normal dynamic self, largely thanks to improved health. And now Vereen is returning.

Vereen finished Week 1 with 101 rushing yards, 58 receiving yards, 15 fantasy points, and a broken wrist that left him sidelined until late October, when he resumed practice. He’s eligible to play this week and “certainly … will have a role in the game,” according to Josh McDaniels. While Vereen’s workload might not be prominent right away, he doesn’t require many opportunities to make a statistical impact. Moreover, he’s markedly better than nominal replacement Brandon Bolden or three-toed sloth LeGarrette Blount, making Stevan Ridley the only legitimate competition for carries. Of course, Ridley and Vereen are vastly different players, so vulturing isn’t really a concern here. Riverboat Ron is, but what’s life without a few calculated risks?

3. Giants D/ST: Sure, Scott Tolzien is better than Seneca Wallace, but that won’t preclude Tolzien from throwing multiple interceptions in his first NFL start. The Giants D/ST began the season HORRIBLY, scoring negative points in four of the first six games, but has since rebounded with three consecutive double-digit outings, which isn’t a surprise given the quarterbacks the G-Men faced in those games: Josh Freeman, Matt Barkley, and Terrelle Pryor. With the Rams’ suddenly amazing defense on a bye, the widely available Giants are like a super-cute puppy sitting there for free at the local animal shelter. Though not even the puppy will give Tolzien a high five.

1. QB Robert Griffin III, Washington Redskins: Here’s a little-known fact about the Eagles’ season opener: It didn’t just feature the Eagles! Amid all of the hullabaloo over Chip Kelly’s dazzling debut and Michael Vick’s read-option prowess and Shady McCoy’s breathtaking touchdown run, some might have forgotten that there was another team on the field that night, and that team was the Washington Redskins. RG3 ended up passing for 329 yards (still his season high), Leonard Hankerson got open with ease, and Santana Moss looked 10 years younger. It was like Juan Castillo had never left!

But since Week 7, the Eagles have held their own against opposing quarterbacks. In that span, the defense has surrendered a mere 16 points per game, and most of the touchdowns allowed have come on the ground. Meanwhile, three of Griffin’s past five outings have resulted in 12 points or fewer (including that three-point shitshow in Denver), and even the good ones haven’t been consistent on a half-to-half basis. He’s a fringe top-10 quarterback given the matchup, and to reiterate, I’d start McCown (or Nick Foles!) over RG3 this week.

2. RB Maurice Jones-Drew, Jacksonville Jaguars: It’s too easy to call MJD a demon these days, so let’s say he’s an ogre crossed with a bogeyman crossed with noted fantasy scoundrel Rashard Mendenhall. (Seriously, can you believe Mendenhall was a first-round pick as recently as 2011? THE HORROR.) At any rate, I’m not buying into the fact that three of Jones-Drew’s past four outings have netted double-digit fantasy points, because mind-blowing miracles should not trump logic. In addition to nursing a sore knee that kept him out of practice yesterday, MJD is up against the league’s second-best run defense and still plays in a very toothless offense. I remain hopeful that Denard Robinson will surpass MJD on Jacksonville’s depth chart, if only because he’d make for a great Challenge of the Week.

3. WR A.J. Green, Cincinnati Bengals: Betting on Joe Haden to shut down Green worked out well in Week 4, so I’ll tempt fate again and guess that Green won’t do much of anything against his former World’s Largest Outdoor Cocktail Party sparring partner. Haden is the reason the Browns have fared so well against WR1s, and Andy Dalton has targeted complementary pass-catchers like Tyler Eifert and Marvin Jones more than Green in recent weeks. Dalton will continue to do so here, because why not pick on Chris Owens if given the chance?

Fantasy Bonanza of the Week: 49ers at Saints

Marques Colston lives! So does Mark Ingram! And Pierre Thomas is suddenly waking up the echoes of 2009! Rob Ryan, how does this make you feel?

Party on, Rob, party on all night. You deserve it. Still, I think your defense is in for a relative beating on Sunday afternoon.

The 49ers generally don’t get blown out in the Harbaugh era (except against Seattle), so I reckon they’ll keep pace with the Saints. Of course, given the way the Saints’ offense is playing, that means we’re in store for a major pointsplosion … kind of like that epic playoff game from two seasons ago. Harbaugh won’t rule out Michael Crabtree (still available in 91 percent of ESPN.com leagues!) for the game, and while this may just be some clever posturing on the part of the Niners, they are down to three healthy receivers following Tuesday’s release of Kyle Williams. Regardless, Frank Gore is sure to go beast mode on Ryan’s defense, which is pretty awful against the run.

As for the Saints, it’s safe to say Sean Payton will have ample opportunity to lose his mind over his players’ celebratory antics.

If it’s possible to quietly lead all running backs in fantasy points, Jamaal Charles has done so. Adrian Peterson provides a #SCtop10-caliber highlight every single week; Marshawn Lynch is a walking gold mine of GIFable moments; Philly’s avant-garde offense has made LeSean McCoy must-see TV; and yet Charles sits atop the leaderboard with 147 points. In a way, his success has mirrored his team’s, because the Chiefs might be the least-respected 9-0 team of all time.

That would change, of course, if the Chiefs go into Denver and beat the 8-1 Broncos. And obviously, getting into a shootout with Peyton Manning is not an advisable strategy, especially if your name is Alex Smith. The Chiefs’ best chance to win involves feeding Charles the ball over and over and over again, thus keeping Manning on the bench for long stretches of time. As such, expect Charles to clear 22 carries for the first time all season. His legs ought to be fresh coming off a bye, and the Broncos have surrendered a rushing touchdown in every game but one this year. Something tells me I’ll have a sublime Charles GIF to include in Tuesday’s review column.

• Ray Rice (owned in 100 percent of ESPN.com leagues): If Ray Rice’s name were Bo Bice, this wouldn’t be a question. You’d cut him, because 2.5 yards per carry and three touchdowns can be easily replaced on the waiver wire. Furthermore, John Harbaugh has recently claimed that Rice’s seemingly fine health is really not so great after all, and that he’d give “whichever guy is playing better” the bulk of the carries going forward. That’s indisputably Bernard Pierce. Still, it’s one thing for Harbaugh to hint that he’s going to slash Rice’s workload, and quite another for him to actually do it. Verdict: Keep him, unless you’re still able to grab Andre Brown or maybe Brian Leonard. For now, Rice is still worth owning based on potential alone.

Ray Rice just does not look like himself this year. He looked like a little kid in a snowsuit running in the open field there. #Ravens

• Joique Bell (owned in 63.1 percent of ESPN.com leagues): Aside from an 11-point outing against the Cowboys, Bell’s weekly totals have been pretty uninspiring: 4, 4, 2, 5, and 2, going back to Week 4. He hasn’t even been all that valuable in PPR leagues, tallying five receptions over the past four games. Nonetheless, there’s always a chance of a short-yardage touchdown with him, even if he hasn’t converted many lately. Verdict: Keep him. The combination of goal-line carries and Reggie Bush’s dubious durability means Bell always merits a roster spot.

For the uninitiated, Challenge of the Week is a feature we started to keep cellar-dwelling owners engaged with the 2013 fantasy season. Week 10’s challenge to win with Griff “Gryffindor” Whalen at WR1 was a rollicking success, so this week calls for something a bit more difficult. Accordingly, I dare you to start Brian Leonard AND Bobby Rainey at RB1/RB2 and come away with a victory, because we are all Schiano Men at heart. As always, Grantland is not liable for any damage you may suffer as a result of participating in the Challenge of the Week. Enjoy!

About Last Night: The Comeback Colts