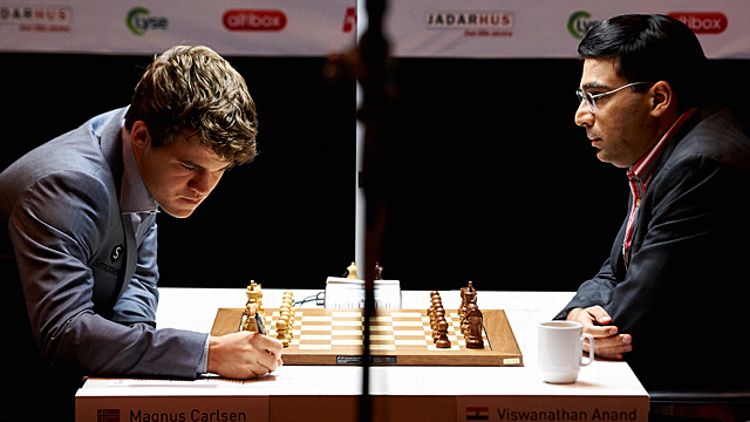 It’s time to get prepped for your new November obsession: the FIDE World Chess Championship finals between Magnus Carlsen and Viswanathan Anand. This is the most hotly anticipated chess match since Garry Kasparov’s prime. Aside from matches involving the Russian grandmaster, this is the most anticipated match since Bobby Fischer squared off against Boris Spassky. It’s well worth your time.

What Is the FIDE World Chess Championship?

The FIDE World Chess Championship pits the reigning world champion against the winner of a qualifying round-robin tournament between eight of the top players in the world. The finals is a best-out-of-12 tournament with draws earning half a point. If the finals end in a draw, four rapid-chess matches are played as a tiebreaker. If those draw, then blitz chess, played with a three-minute starting clock, serves as the final tiebreaker.

Anand is the reigning undisputed chess world champion, a title he has held since 2007. Anand is also a six-time winner of the Chess Oscar, an award that is exactly what it sounds like it is. He has been among the upper echelon of the chess elite since the early ’90s, when he was known for playing at blitz pace in regular tournaments. His nickname is the Tiger of Madras, meaning that the two greatest athletes in the world named Tiger dominate their respective sports wearing collared shirts and slacks. Anand is a living legend, functioning highly at the back end of his career.

Carlsen, the challenger, is a veritable wunderkind. At 22, Carlsen has already reached the highest peak ELO rating in the history of chess, and he has won the last four Chess Oscars. He’s also relatively well-known in the States (by Scandinavian chess-playing wunderkind standards) because his youth, absurdly high level of play, and good looks have made him a media darling (again, by Scandinavian chess-playing wunderkind standards). Carlsen, like Anand, is also known for his blitz play. He’s also known for his tenacious finishing, always attempting to keep an opponent on the ropes in the hopes of finding a new way of turning a draw into a win.

Basically, these are the two best players and biggest names currently in chess. This is Carlsen’s first WCC final and it may well be Anand’s last. It’s amazing to watch their minds work, to watch them puzzle out move after move, scenario after scenario, playing at a level where a single mistake could be what separates them from immortality. The tension created by their intellectual precision is intoxicating.

So, Wait, Where Do We Stand Now?

Currently the match is drawn at 2-2 (the first to 6.5 wins). Thursday is a day off for the players, with action resuming on Friday. The grueling match could stretch all the way to November 28.

The first two games of the match were both drawn in rather tepid fashion. Both players were throwing jabs, testing their opponent. The next two games, while also both draws, were massive body shots. Suddenly the players were engaged in fatigue-inducing marathons in which both players poked and prodded at their opponent’s midgame to try to open up a winning endgame. In Game 4, which lasted seven hours, Carlsen briefly had an opening to win with black that he missed. Will this haunt him going forward? It could! (It probably won’t.)

The FIDE finals are streaming live on YouTube, with commentary provided by a rotating cast of grandmasters. The commentary is the final necessary piece to enjoying the championship. It’s, in a word, unusual.

Rather than have a studio personality in the booth, there are two grandmasters analyzing the board and projecting different strategies going forward. Because the time between moves can be as little as a second and as much as half an hour, sometimes the commentators will be able to go deep, testing out different stratagems live. This gives even a terrible chess player (like myself) a foothold in understanding the action. Suddenly an otherwise inscrutable strategic decision manifested as a middle-aged man moving a tiny horse can carry with it massive emotional weight. Again, this is intoxicating. This is must-watch chess. Must-watch chess!

Because the tournament is being played in Anand’s home city of Chennai, India, each day’s game begins at 4 a.m. ET. So you may have to really commit to watching some chess. But when else will you be able to sacrifice some sleep to watch a once-in-a-generation chess matchup like this one? And at the very least, you can watch the endgame from your office as you pretend to do work. That’s a classic King’s Gambit (I think).