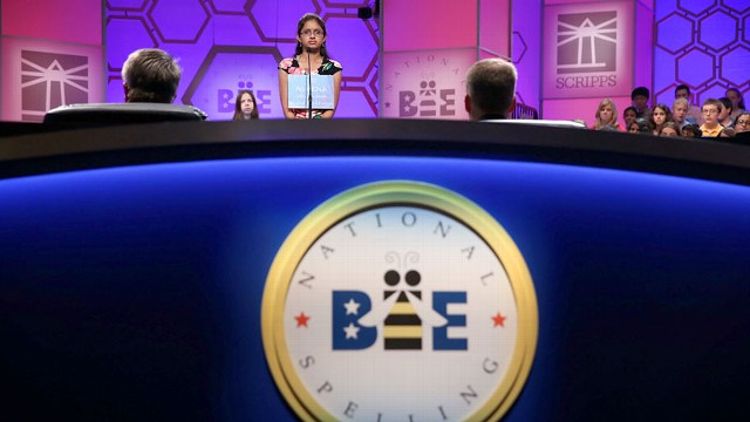 And after months of studying words with my mother whenever I was awake and not in school (breakfast table, drive to school, drive to practice, drive from practice, dinner, before homework, after homework), it was time for the spelling bee.

I don’t remember much about the event — because it was 18 years ago — except for three facts: (1) Raven-Symoné was the grand marshal and she was pretty to me, (2) I came in second place, and (3) I lost on the word “wean.”

There is no reason I should still remember this, but I always will. Related: my irrational lifelong hatred for the band Ween.

Since this tragic mid-’90s event, spelling bees have become a part of popular culture, most notably 2002’s Spellbound and the annual Scripps National Spelling Bee, which began Wednesday with preliminary rounds and concludes today with the semifinals and finals.

Even when not viewing the event, the bee has been entertaining to watch unfold via the official Twitter feed @ScrippsBee. Some updates are happy:

Some not so much:

But all are informative. By giving correctly spelled words and definitions for every speller’s word, this is easily the most educational 48-hour period in the history of the Internet. And it’s a bunch of genius tweens us idiot adults have to thank.

Another byproduct of this event, in addition to being constantly impressed by our future bosses, is the reality that many adults not only participated in bees of varying prestige but remember the competitions with a troubling amount of detail.

Realizing this, I opened up my e-mail and Twitter feed as a one-sided therapy session, asking people to share their traumatic spelling bee failures. After a few hours, I had to close said therapy session, because the response was overwhelming. And perfect.

“Pajama is not spelled with a g. 5th grade me forgot that.” — Simon Wentzell

“Got ‘tsunami’ in a late round of the Cobb County bee and was so psyched about nailing the ‘t’ that I ended with ‘y’ instead of ‘i.’ — Eric Single

“One and only time in a spelling bee. My word: ‘annals.’ Well, you know how that turned out.” — @jnadsit

Remembering Specifics About the Bee As If It Were Yesterday, Down to the Outfit, Even Though It Was Definitely 20 Years Ago:

“Once lost on ‘vicinity.’ Stayed on stage, asked if they were sure I was wrong. Was wearing Warren Moon Vikings jersey.” — Dan Hinkel

Still Bitter About the Word They/Others Were Given:

“4th grade, 1st round. ‘Absolutely.’ Wtf absolutely? The kid before me got ‘helmet.’ Absu… I was done, scarred, and heartbroken.” — Brittany Lapidus

Came Across a Legend:

“Lost 2 yrs in a row to kid who sat head down, looking up & mechanically spitting words only when his name was called. #dispiriting” — Beth Carpenter

Cried and Stormed Off, a Character Trait That Probably Continues to This Day:

“I lost the 5th grade spelling been on “celery.” Spelled it as ‘salary.’ Rode my bike rightthefuck off campus and cried. It was 10 am.” — Shea Serrano

“Came in 5th pl in state spelling bee in 7th grade. Odds on favorite in 8th and went out on the 1st word. Couldn’t handle success.” — Bernie Mucitelli

Learned That Competition Isn’t for Everyone

“4th grade, 1999: It came down to my best friend and me in the final round of our middle school spelling bee. I mixed up the “O” and “E” in “dungeon” and our whole grade rushed the court. We were in this low-ceiling, undersized catholic school gymnasium and they rushed the court. I remember I was in the middle, hugging him and jumping up and down. A fairly shameful memory, but also my first red flag of extreme lack of competitiveness.” — Alex Conover

Scarred for Life and Will Never Live Down Loss:

“Told the girl standing next to me how to spell “chauffeur,” then I spelled it wrong… Will never live it down.” — Jeremy Bare

“Fifth grade spelling bee — A round before spelled the word “simultaneously” correct and made the top 3. First word after was “Cavalry.” I was floored since my grandfather was the minister of the Calvary chapel of Fort Myers. Didn’t use proper spelling bee etiquette and ask for definition. Lost on homonym technicality. Never lived it down.” — Nick McEnroe

“In front of the whole elementary school, I spelled “opera” as Oprah. I was the first one out and didn’t understand why everyone was laughing. Still in therapy.” — Alex Pilnik

“Game Day, I’m breezing through the competition barely even having to do the weird air pencil on the back of my namecard necklace. I advance to the final round against this kid Michael, I’ll never forget that ginger. I get “doctor”…I don’t even pause — D-O-C-T-E-R.

Horror washes over mom’s face. Dad walks out of the cafeteria. I’m feeling disowned. Michael nails his next word, wins the Bee, and a $50 gift certificate to McDonald’s.” — @CmfG

“His word was ‘hippopotamus.’ Butchered it. Instead of graciously taking his exit, he walks to the back of the stage and just cries. They can’t get him off the stage, and they can’t continue the bee with a kid sobbing uncontrollably behind the rest of the competitors. What do they do? They give him a second shot. He goes on to win. Bologna. B-o-l-o-g-n-a. Bologna.” — Nick Stockman

As I sat dejected on the stage, my dad walked across the street to the Trenton library and looked it up in their dictionary.

Long story short — THEY HAD A TYPO ON THEIR LIST OF WORDS!!! As a consolation they let me come back the following year (and I lost).” — Ben Bacon

Won the Bee and Is Still a Jerk About It, I Hate You, xoxo – Rem:

“I won every single spelling bee I ever participated in, grades 1-8. True story.” — Rob

Too Good to Be True. As in I Don’t Believe Them for a Second, But Whatever:

“In 6th grade had to spell Francisco. Spelled it FranSISQO.” — Akhil Sharma

“5th grade: Lost in 5th grade round on “syncopation” because I was about to leave for Mexico for half a year and spelled it “cincopation.” Knew every single word in the overall school round as I sat seething in the audience.” — Gavin Byrnes

[Note: This could easily be true, I’m just thrown off by the six-month tour to Mexico at age 10. Where’d you study abroad in college, Mars? Detroit?]

PURPOSEFULLY THREW THE SPELLING BEE, BECAUSE ADOLESCENCE IS TRICKY:

“I intentionally spelled the word ‘bring’ incorrectly in the 6th grade spelling bee, in a poor attempt to look ‘cool’ in front of my new peers. The teacher saw right through the plan since I’m sure I was clearly a nerd, pulled me aside, and told me I owed her a 3 page essay detailing why it’s cool to be smart. #peerpressure” — Mike Whitehouse

“5th grade spelling bee. My classroom had a qualifying round to decide who would represent us against the rest of the school. I knew I was the best speller in the class but I didn’t want to go up and spell words in front of the whole school because I was 11 years old and social anxiety took up more space in my body than bones.

I misspelled “spaghetti” on purpose.

I still finished 2nd and became the alternate in case our class representative passed out or something, I don’t know. In retrospect, it was a savvy move to appoint alternates.” — Vishnu Pillai

“So when I was in school, we always had an in-class spelling bee to determine which person from our class would go to the regional spelling bee. Well, in 3rd grade, it got down to me and 3 other people (2 of whom happened to be my best friends), and we were going to have a 5 word “spell off”. Here’s how it was going to go down: each of us would go into the hallway individually with the teacher, and try to spell the same 5 words, without any knowledge of whether we were right or wrong.

I went up to the teacher’s desk for something else, and saw the list of spelling words, with the 5 words for the spell off HIGHLIGHTED. Naturally, I wrote them down as soon as I got to my desk and planned on memorizing them. And memorize them I did. What happens next is one of the weirdest moments of my childhood. I started feeling guilty.

I get out in the hallway, knowing all 5 words by heart, but with a heavy conscience. Instead of telling the teacher that I saw the list and asking for different words, I threw the spelling bee. I THREW A FREAKING THIRD GRADE SPELLING BEE. I spelled “liberty” l-i-b-a-r-t-y. I spelled “hospital” h-o-s-p-i-t-e-l on purpose. I think I spelled the other 3 right, because I convinced myself if my friends couldn’t get 3 words right, they didn’t deserve to go either.

I’ve never told a soul this story until now. Feels good to get it off my chest.” — Kyle Nelson