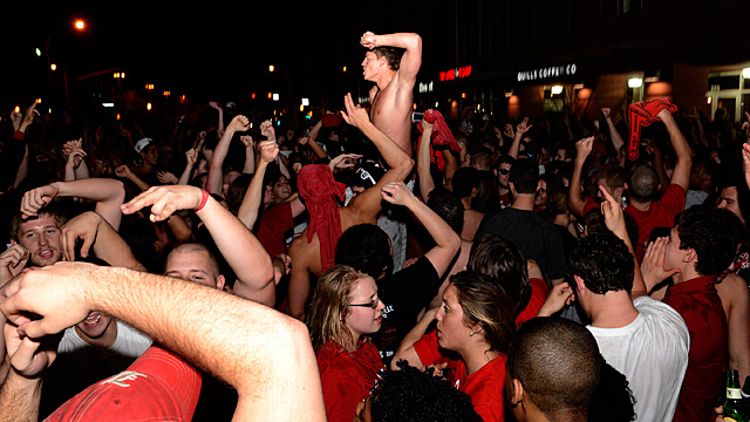 Thirteen hours before Peyton Siva’s free throw sealed his team’s first national championship in 27 years, Jon DeSalvo was in Louisville’s Holy Trinity Catholic Church. A lifelong Kentucky Wildcat with a visceral hatred for the city’s red half, he was not there to pray for Michigan to deliver the sweetest of blows and extend the Cards’ barren spell.

He was there to bury his high school friend.

Joe Gadansky had unexpectedly died four days prior. Upon leaving the church, Gadansky’s brother Chris leaned in to embrace DeSalvo and thank him for coming. He also delivered the line that DeSalvo hated more than any other.

But for the first time, DeSalvo kind of, maybe, slightly, perhaps, somewhat did not totally mind the thought of the Cards winning.

You’ve heard it all before when a college wins a national championship. Bars, living rooms, and backyards shake with a gamut of emotions that ordinarily would need to be treated with prescribed medication. Food is grilled, alcohol is consumed, and people begin and end a joyous journey to losing their voices. And in that way, the scene Monday in Louisville was no different. Bardstown Road, the cultural vein that runs for miles through the heart of The Ville’s Highlands neighborhood, was awash with red. Alongside the boutiques, restaurants, and microbreweries ran a slow-moving and endless river of brake lights. The honking came in unison, the cops all but nonexistent.

But Louisville, all together, is different. The bustling enclave on the Ohio River might be home to Pitino’s Cardinals, but close to half of the city is very much distinctly blue — University of Kentucky blue. The city does not offer a cozy bubble that so many storied college basketball towns can. It’s not Bloomington or Lexington, where fans subscribe to one single creed. Make no mistake: When Michigan lost 82-76, Ann Arbor wasn’t the only place where hearts sank. The swathes within Louisville and across the state who had captured the same crown only last year were hating every minute of it. As for any thoughts to rooting for their rivals? That’s on par with selling state secrets to the Soviets.

At the Bard’s Town bar, the few UK fans who could muster attending came up with drinking games to numb the pain. Every Kevin Ware appearance was greeted with a mouthful of watery beer. While Louisville fans were suffering referee-related aneurysms, UK fans were quietly happy. After one particular bad call, the owner, apoplectic, walked out to get more dip before he smashed his own bar. His high school buddy, meanwhile, politely wished for the demise of Trey Burke and his whole family.

UK fans looked on. But as the game turned and Michigan lost its nerve, and Cardinal victory looked certain, a crowd of celebrants and smiling faces was peppered with smiles through gritted teeth.

Fans who had poured into the bars before the game — fire regulations be damned — spilled messily and joyously onto the streets, where cars were replaced with throngs of people who could barely remember the last time this happened, in ’86.

The UK fans left early, likely thinking about their best-ever recruiting class taking the court just six months from now to start the process of reclaiming what their rivals had stolen.

With one second left on the clock, DeSalvo walked outside and called Chris. He passed on his congratulations — as hard it may have been. The Gadanskys would celebrate and so would Joe, they imagined. Tears wiped away, DeSalvo walked back into the bar. He looked at his phone and saw a text from Chris.

“I’m still smiling from that phone call,” it read. “Honored to call you brother.”

Fireworks could be seen in the distance and even gunshots echoed. Later that night, tear gas would be used to disperse the thousands who started celebrating a little too hard. Next year, the rivalry will resume and DeSalvo will revert to his vehement hatred of all things Cardinals. But on Monday, at least one UK fan made an exception.

Filed Under: Louisville, We Went there

Jerry Jones Stands by 2008 Draft, Continues Distancing Himself From Reality