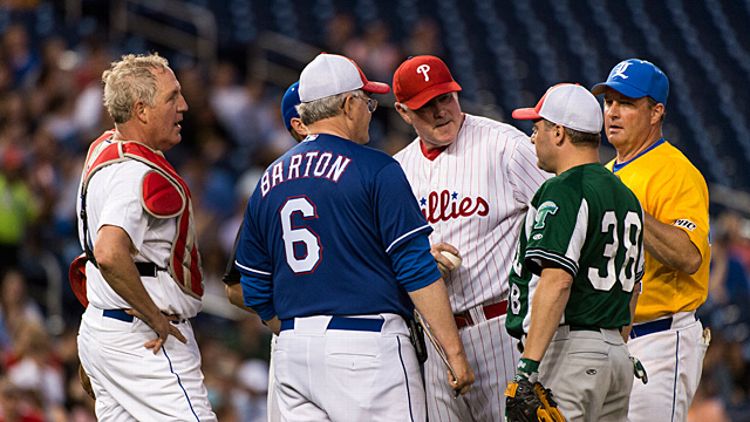 In our nation’s sports-obsessed capital, the Congressional Baseball Game is a serious affair. The balls are hard, the throwing is overhand, and the practices begin months in advance. The game is played on a major league field, in a major league stadium (Nationals Park, 11 blocks due south of the U.S. Capitol), in front of thousands of spectators. And, of course, the game is played between the two parties that have grappled for dominance in this town (and country) since the days of Abraham Lincoln.

The Congressional Baseball Game itself is almost as old. It was a mere six years after the first World Series when Representative John K. Tener, a Republican from Pennsylvania, decided Congress needed its own version. Elected officials often apply skills from their previous careers to their new gig; usually this means drawing on their experiences as businessmen, lawyers, or soldiers, but Tener brought something different. The former Baltimore Oriole and Chicago White Stocking was the first Major League Baseball player to serve in Congress. And he encouraged colleagues on both sides of the aisle to try their own hand at the flourishing “New York Game.”

The Congressional game quickly grew when President Woodrow Wilson attended in 1917. By 1926, the contest was preceded by elaborate parades by each party —complete with an elephant and donkey. But the seriousness of the game was also drawing the ire of legislative pooh-bahs, who complained that the players were shirking their congressional duties. Their intervention — as well as American intervention in Europe and the Pacific — meant the game would only be played intermittently until 1962. Perhaps with an assist from Mantle and Maris, Congress’s game caught back on that year and has been played every summer since.

The game is taken so seriously that even the threat of a D.C. derecho on Thursday didn’t stop them from playing. When I arrived at the park, the tarp was still on the field, but its grayness was offset by the colorful garb of practicing players. Participants wore uniforms associated with the geographic areas they represent: from the majors (Jared Polis’s bright-purple Rockies jersey) to the minors (Bill Shuster’s Christmas tree–colored Altoona Curve regalia), from colleges (the handsome orange piping of Chuck Fleischmann’s University of Tennessee) to high schools (the poignant pinstripes of Newtown High School, worn by Connecticut’s Chris Murphy).

Players I talked to on each side were confident of a win. Democratic manager Mike Doyle, donning a Pirates road uniform stamped no. 14 — the number of Pittsburgh’s congressional district — laid out an unassailable game plan, as if he were Jim Leyland. “The key for us will be scoring runs,” he intoned. “If we put the ball in play, and score early, like last year, we’ll be fine.”

Republican skipper Roger Williams more closely resembled Bobby Cox with his folksy dialogue and crisp Atlanta duds. (Williams was drafted by the Braves in the 25th round in 1971 and spent three years as a minor leaguer in their system.) “We got speed, we got good hands,” he said in his Texas twang. “We’re gonna win this ballgame.” In my imagination, the hoary sexagenarian then spit on the brick-red dirt.

Williams had good reason to feel hopeful. Last November, the voters of Florida’s Sixth Congressional District saw fit to elect 34-year-old Ron DeSantis to represent them. As a candidate, DeSantis campaigned as a military veteran, anti-tax crusader, and small-government Republican. But to GOP manager Joe Barton, he was Ron DeSantis, former captain of the Yale baseball team. DeSantis had faced erstwhile New York Met Rick Ankiel in high school; he had played in the 1991 Little League World Series opposite San Diego Padre Jason Marquis. Now he was going to help Republicans right the ship against an even more feared adversary.

That adversary was New Orleans Democrat Cedric Richmond. The 39-year-old staff ace with the fiercely competitive stare was the two-time defending Congressional Baseball Game MVP. He’d pitched every inning for the Democrats since he broke into Congress, with spectacular results: a 2–0 record, a 2.50 ERA, and a 29/7 K/BB ratio. In 2011 he finished just shy of a no-hitter. The former Morehouse College standout has been called the best congressional baseball player in history.

Democrats have looked unbeatable in the Richmond era, but the buzz before the game was all about whether DeSantis could change that. (“He hit two home runs in practice,” Republican Rand Paul told anyone who would listen. Paul’s father, Ron, hit the only over-the-fence home run in Congressional Baseball Game history in 1979.) So an eerie hush fell over the stadium in the top of the first inning when DeSantis faced Richmond for the first time. Richmond, whose offerings are usually 80 mph fastballs, threw DeSantis a literal curve for strike one.

The crowd oohed, and Richmond reared back for his second pitch. DeSantis made contact, and it shot high into the air. It came back down again only about 60 feet from home plate, in foul territory, where the pitcher unusually made the out himself, stabbing at the ball as it cascaded to earth.

It was the GOP’s first inkling that the promise of DeSantis (0-for-3, failed to get the ball out of the infield) would not be fulfilled. The second was when Democrat Adam Smith (2-for-2 with two runs), a 17-year veteran of the Congressional Baseball Game, ripped a leadoff double in the bottom of the frame. He would be driven in by Richmond (who else?) two batters later. Four more Democrats reached base in the inning, and the team led 5–0 after the first.

Errors haunted the Republican team. “The fielding is … still a concern,” Jeff Flake confided to me before the game. By the fifth inning, his team was on its third infield arrangement, but things were only getting worse. Republican “closer” Lou Barletta (2 IP, 9 H, 10 R, 4 ER, 2 BB, 1 K) was good enough in his younger days to try out for the Cincinnati Reds, but botched a simple forceout at home plate that allowed the Democrats to bat around yet again. Later in the inning, the GOP first and second basemen watched helplessly as a seeing-eye single trickled past them through the hole. Eight runs crossed the plate in the inning.

Republicans could be excused for losing heart toward the end of the seven-inning game. Entering their final at-bat, they had managed just two hits off Richmond, who was going for a complete-game shutout. A double and two strikeouts later, he had it. The best ballplayer in congressional history had just turned in his best performance ever: 7 IP, 3 H, 0 R, 0 BB, 5 K — to go along with a 4-for-4 night at the plate. He missed the cycle by a home run — which he also just missed, on a 320-foot triple to left field.

The 22-0 rout was the fifth straight win for the Democrats, who narrowed the GOP’s lead in the all-time series to 41-38-1. After the final out, and a collegial “good game” handshake with the Republicans, they hoisted an impressively large trophy up toward the faithful who had stayed until the bitter end. They slapped each other on their backs, and they scooped up their kids who ran onto the field in celebration. By this point, it was clear to all why America’s most powerful people take a simple sporting event so seriously: On this day, they only had to be powerful at the plate. Tomorrow they would have to go back to being congressmen. But tonight, and for a few more precious minutes, they were ballplayers.

Nathaniel Rakich (@baseballot) is a writer based in Washington, D.C. His work has previously appeared in The Atlantic, Let’s Go travel guides, and the Harvard Crimson.

Filed Under: Baseball, We Went there