We Went There: Sixers-Knicks in the Carrier Dome 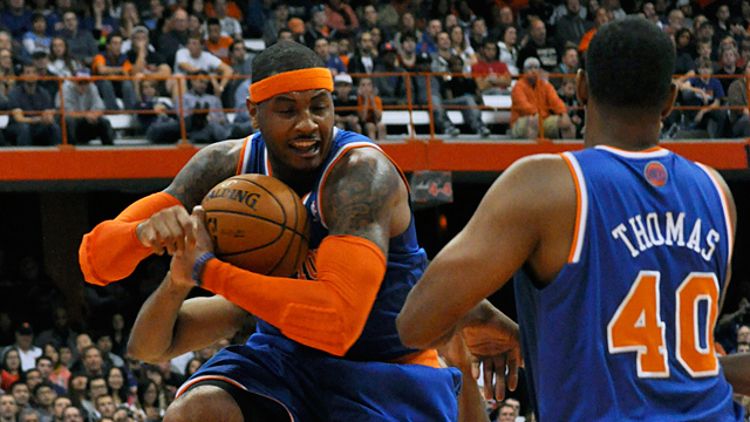 Last night, Carmelo Anthony finally heard chants of “MVP.” It was not in Madison Square Garden, where there is desperate hope that he will make the Knicks a contender this season, but in the Carrier Dome at Syracuse University. It was here that he won a NCAA championship in 2003 as a freshman. Despite the controversies and disappointments that have marred Anthony’s professional career, he is still regarded as an unblemished winner in upstate New York.

On Monday, the Knicks and Sixers played an exhibition game at Syracuse that was largely billed as Anthony’s homecoming. His college coach, Jim Boeheim, was on hand, resplendent in an autumnal kit of brown loafers, brown socks, brown pants, and a brown suede jacket. He drank a Pepsi and signed an autograph for a happy Asian child. A crowd of students in Knicks and Orange jerseys — I’m too old to tell if they were in college or high school — yelped for Anthony’s attention, mugged for out-of-town MSG cameras, and actually recognized Dolph Schayes.

Anthony was introduced first. He had never lost in the Dome, and was keenly aware that the evening’s focus was on him. He played substantial minutes, barked at the officials, and played hard. Early on, he drained a jumper, assisted an easy bucket by Tyson Chandler, and grabbed a steal. Everyone roared in approval.

As a member of the Orange, Anthony was stylistically very much like the current version. He scored effortlessly and with the preternatural polish that would make him such a Hydra-like offensive threat in the pros. Unlike Derrick Rose, who needed a jumper, or Blake Griffin, whose post game still lacks refinement, Anthony was ready-made for the NBA game. No one who saw him drop 33 points and grab 14 boards against Texas in the Final Four would argue differently.

But it’s hard to believe that Anthony’s one-shot, one-kill national title didn’t sculpt his present basketball worldview. How could it not? His greatest accomplishment came not from buying into a communistic ball-sharing system or a Byzantine defensive scheme, but as a result of doing exactly what he enjoys: Taking lots of shots, monopolizing the basketball, and playing just enough defense to get by.

Still, because of Anthony’s formidable talent, the Knicks — unilaterally, really, via owner James Dolan — decided that he was the future of the franchise. Those who seemed to disagree are no longer with the organization. Donnie Walsh, who reportedly hedged on making the initial deal with Denver, retired. Coach Mike D’Antoni, whose limber offenses eschewed the ball-stopping wing isolations that Anthony craves, resigned. Jeremy Lin, who offered fans an alternative hero, was allowed to leave for Houston for specious financial reasons. Even Amar’e Stoudemire, the Knicks’ star before Anthony’s arrival, has acquiesced to taking a supporting role, spending his offseason practicing pivots with Nigerian strongmen.

Considering the swath of players and management that was sheared away to make New York a comfortable nest for Anthony, one might assume that his basketball career had not peaked in Syracuse. But rarely has a franchise kowtowed so deeply to a player who has failed so frequently. Kobe Bryant, in comparison, was already nicely iced-out when his machinations ushered Shaquille O’Neal out of Los Angeles. Anthony has escaped the first round of the playoffs just once in nine trips, while owning a career postseason field goal percentage of .419 and one of the worst playoff records in NBA history.

But he makes you a believer. In the third quarter of last night’s game, Anthony went nutso for a brief window, relentlessly attacking the rim, drawing fouls, and then draining a 3. It’s impossible not to do a Birdman dry-hand scrub when contemplating this weapon being harnessed properly. The pro-Melo crowd basked in his temporary brilliance as the Knicks cut a 20-point deficit in half.

The Sixers, on the other hand, were booed all night. Not lustily, but dutifully. Philly dressed only two projected starters, Jason Richardson and Lavoy Allen, making it an especially meaningless game for a team whose preseason has been successful in mostly meaningless ways.

Philly’s record is stellar, but Andrew Bynum has sat out while recovering from mysterious Teutonic blood-spinning procedures and joint lubrications. Neither Evan Turner nor Jrue Holiday — both of whom Philly will have to make contract decisions about following the season — have shot particularly well.

On the upside for the Sixers, new shooters Nick Young and Dorrel Wright have struck from 3-point range during the preseason, a promising omen for a team that was the league’s worst at long-range shooting last year. Philly has replaced a sad offense that relied on mid-range jumpers to one featuring a legitimate post threat (if healthy) surrounded by a convoy of gunners. This is a fun development, and they have scored a boatload of points in the preseason.

For Sixers fans, the most important thing to be learned from last night’s game is this: Coach Doug Collins calls Young by his nickname, Swagy. Not sarcastically, as in “Nice shot, Swagy,” but conversationally. Which, for Collins, means imploringly. “Come on, Swagy!” Sixers players on the bench laugh whenever Swagy does anything, mimicking his exaggerated goose-neck release and cracking up when he was tagged for a carrying violation. Turner is the ringleader, so maybe that’s his deal.

Despite the Knicks’ late surge, the Sixers cruised to an eight-point victory. With a minute remaining, Anthony was subbed out. After shooting 7-23 in a loss, he earned a standing ovation.

Fantasy Island: 'Cut Him or Keep Him!' and the Week 8 Waiver Pickups