Fantasy Island: ‘Cut Him or Keep Him!’ and the Week 8 Waiver Pickups 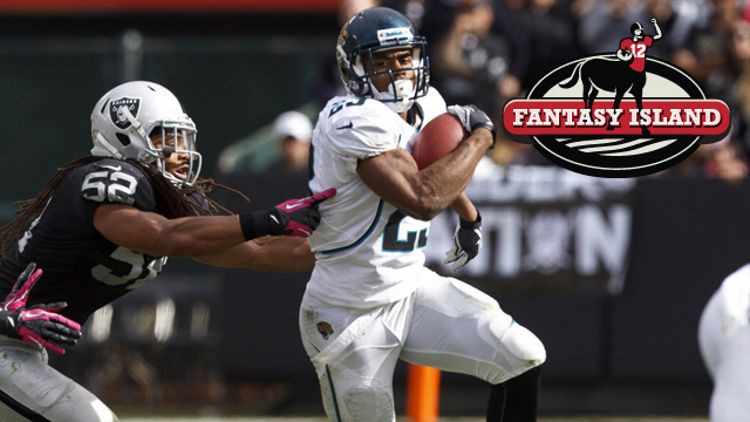 Announcer: Hello, America! And welcome to another edition of everyone’s favorite game, Cut Him or Keep Him!

Announcer: And here’s your host for the evening, someone who has been cut from all of our fantasy teams at one point or another, Daaaaaaaavone Bessssssssssss!!!!

Davone: Hey, thanks so much everyone! Anyone had me on their team this season?

Davone: Anyone start me in Week 4 when I blew up for seven catches and 123 yards?

Davone: All right, then! Let’s start our game! First, our contestants. Contestant no. 1 is a lovely young hair stylist from Denver, Colorado, who’s never played fantasy football in her life. Let’s welcome Renee!

Renee: Thanks, Davone! Happy to be here!

Davone: Good to have you, Renee! Our next contestant is a Patriots fan from Chicago who knows more about dancing than he does about football. Let’s welcome Geoff!

Geoff: Hey, Davone, love your work. Your ability to have great games weeks in a row only to have two catches for six yards when fantasy owners really need you is terrific …

Davone: Hey, thanks! Our last contestant is a — well, this can’t be right, this doesn’t seem fair — is the head coach of a professional football team? I guess so … from North Carolina, let’s welcome Ron!

Davone: Ron? You can speak right into that mic; it’s plugged in.

Davone: Well … you know how this works. I’ll give you a player’s statistics, but not his name, and you tell me if we —

Crowd: CUT HIM or KEEP HIM!

Davone: Good to see you guys have started drinking early! Let’s get this party started: This QB has averaged 12.6 points per start, and if you take away his 23-point outing in Week 1, that number drops to 10.6. He’s scored fewer fantasy points than Brandon Weeden, Andy Dalton, and Ryan Fitzpatrick, and is the 28th-ranked QB in ESPN standard scoring. Renee, what do you think?

Renee: Well, I don’t really know much about fantasy football, but isn’t that Dalton guy a ginger? Scoring less than a ginger doesn’t seem good, so I’m going to say — cut him?

Geoff: I think so. I’ve been studying my fantasy magazine. It’s the only place I get information.

Davone: Nice preparation, Geoff. This tight end has one touchdown on the season, is the fifth receiving option on his team, and has fewer points than Brandon Myers, Jermaine Gresham, and “Channy Channy Bang Bang” Scott Chandler. What do you think, Geoff? Cut him or keep him?

Geoff: Is making a ridiculously lopsided trade offer that no one would accept an option?

Davone: That’s right, Geoff! You’ve just cut Jermichael Finley! Why he’s still owned in any league I can’t fathom! Great job. You’re on the board with 50 points. Ron, are you ready?

Davone: Ron, you’re starting to scare me. Are you alive behind those sunglasses?

Davone: All right! Let’s go with a position you are horribly under-qualified to evaluate — running backs!

Davone: This running back has yet to have more than 11 carries or 51 yards in a game and plays in a read-option offense that his coach seems to think is the greatest idea ever. This player has fewer fantasy points than Darryl Richardson, Andre Brown, and Kendall Hunter. He also has fewer fantasy points than guaranteed millions coming his way this year! For 50 points, and the chance to go to the lightning round, Ron, cut him or keep him?

Davone: Ron, I need an answer! This is a player you are VERY familiar with …

Davone: Ron, that mic is plugged in. I will give you the points if you make any noise at all.

Davone: Ooooooh, so close, Ron, but I’m sorry, the correct answer is … audience …

Davone: That’s right! Ron, I’m sorry to say it, but you’ve been eliminated from the game, and hopefully, says the guy writing these lines for me, from the Panthers staff by the end of the year. Any parting words?

Davone: On to the LIGHTNING ROUND! Renee, Geoff, you know how this thing is played: I’ll name some players and this time you say “Cut ’em!” or “Pick ’em up!” First one to give an incorrect answer is out. Let’s go!

Geoff: PICK HIM UP!

Davone: Ooh sorry, Geoff, that is incorrect. Your love of Larry Johnson has cost you again. But that means Renee is our winner!

Renee: Yeah! What do I win?

Davone: Congratulations, Renee, you get to be the next defensive coordinator for the Philadelphia Eagles, the only job in the NFL that needs no qualifications!

Davone: Thanks for coming, everyone, and we’ll see you next time on …

We Went There: Sixers-Knicks in the Carrier Dome