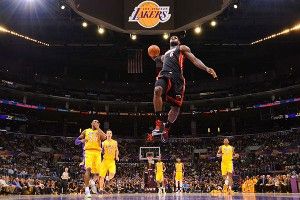 Even in a game featuring LeBron James and Kobe Bryant, the first 40 minutes of last night’s Lakers-Heat game had been filled with typical, mid-January schedule filler play. Within the game’s first few minutes, James had already put down two dunks worth the price of admission, but his performance was all anyone had gotten. Bryant was 3-for-16 from the field. Clanking just about every jump shot it took, Miami looked like a team playing a back-to-back on the 10th day of a 10-day road trip. The Lakers looked like a team that isn’t very good. Then, with the game tied at 78, with 7:22 left in the fourth quarter, James launched his first 3 of the night, and as his only bucket from outside the paint dropped through the net, the game everyone had hoped for began.

Even when he’s missing five times as many shots as he’s making, all Bryant needs — especially down three in the fourth quarter — is one. Not 15 seconds after James hit his 3, Bryant hoisted his own from the top of the key, and the game was tied again. It took two shots for the game to feel like a duel, to the point that a Shane Battier 3 on Miami’s next possession already felt out of place. After the Lakers controlled the miss, the narrative regained course as Bryant isolated on the right wing. Barely a foot inside the 3-point line, Bryant shielded the ball from Dwyane Wade and bided his time. From a few rows back, a shout of “Take him!” carried. One dribble later, Bryant was pulling up with a hand in his face from 20 feet, and like that, the Lakers had a two-point lead.

Wade, forcing himself into the final few minutes, was more amenable, but after his runner tied things at 83, the figurative LeBron-Kobe battle became a literal one. When the teams returned to the floor after a timeout with 5:26 remaining, it was James who checked Bryant as the Lakers inbounded the ball. Erik Spoelstra said after the game that that choice was James’s to make, a simple “I want him” as Miami sat on its bench. The presence of the league’s best perimeter defender wasn’t a deterrent for Bryant, who again isolated on the wing before putting up a long jumper.

The ball careened off the back rim, and as it bounced out past the 3-point line, James made what Spoelstra described as “the play of the road trip.” On his ninth straight night away from Miami, 37 minutes into the 42 he’d finish with, the best player in the world dove to the floor, gathered the ball, got to his feet, led a secondary break, and hit Ray Allen for a 3 that made it 86-83.

Each live viewing of LeBron comes with two stark reminders. The first is how much ground he covers, how small he makes the floor look. It doesn’t matter whether it’s in the half court, on defense, or on the break; James chews up space. The second is how hard he plays. A headfirst dive would’ve been enough, but his effort was even more apparent a few minutes later. With Bryant wiggling back and forth along the baseline in an attempt to get free, James was with him on every step. When Kobe finally made the commitment to cut back outside, James was moving so fast in-step that an unseen Pau Gasol screen staggered him, lifting a foot off the ground and snapping his head back. Wade’s attempt to help was a second too late, and Bryant, never the one to go away, hit a 3 to tie the game at 90.

Miami scored the next four points, and as the clocked ticked under a minute, James pounded the ball at the top of the key with a 94-90 lead. As the shot clock ticked down, James made two hard dribbles to the left, pulled up just outside the paint, and dropped a short jumper through the net to put it away. The whistle blew, and James bounded down the sideline before launching into a hip bump with Norris Cole on his way to the Miami bench. It all seemed as if James was relishing the moment — against Bryant, in that building — but afterward, Spoelstra explained that James’s fourth quarter against Utah is no different. These days, he knows — and will do whatever it takes to take over when it matters most.

Whenever Bryant and James take the same court, the notion of a showdown is bound to follow, but last night was just more proof that these days, there aren’t many of those in which James falls. An and-one late pushed his point total to 39 (to go along with eight assists and seven rebounds), and they came on just 25 shots. The paint, the rim, and the Lakers were his when he wanted them, and it’s nights like these where he makes being the best in the world look so easy.

The Five Players Who Could Revamp the Spurs' Title Chances