We Went There: Joakim Noah’s Career Night, Just When the Bulls Needed It 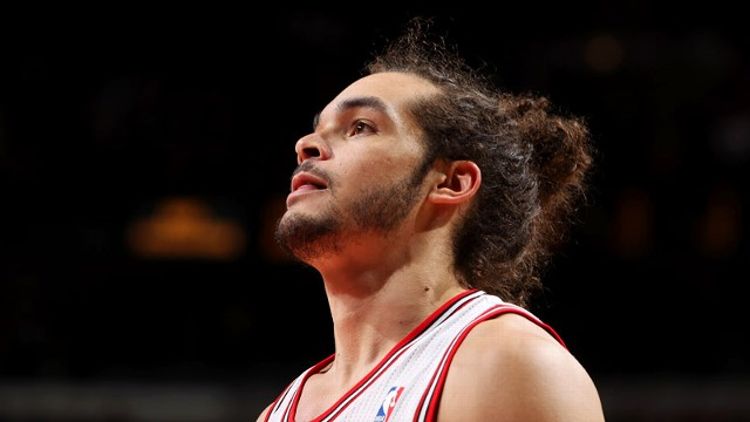 With 2:15 left in the third quarter at the United Center last night, the Bulls and Sixers made their ways to the proper benches for a TV timeout. It was that time in the night when a footrace between animated breakfast food comes on the video board, and as the racers were announced (Dashing Donut, Cuppy Coffee, and Biggie Bagel), people in the crowd reached for their cards to find out in which Dunkin’ Donuts product they had a rooting interest. My friend made a joke about how Larry Bird must hate all this, but aside from that, I see little problem in providing fans with interstitial bits of entertainment. Plus, Dunkin’ Donuts coffee is delicious.

The troubling part came when we noticed that joining the viewing public was the majority of the 76ers bench. Down 11, two days after a double-digit loss to D-League Orlando followed by a public chastising by its coach, most of the Philly roster was more invested in Dashing Donut’s triumph than in whatever Doug Collins had to say.

Chicago and Philadelphia, it would seem, are in similar situations. Both are in their third year of playing for a demanding head coach who occasionally sounds like he ate a pack of Marlboro Reds for lunch. Both have spent this season without the star that was supposed to define their rosters. And both came into last night’s game mired in their worst stretch of the season. It was something, then, to watch how each responded at their lowest point. It’s not that the Sixers’ starters shared their apathy of their bench-dwelling teammates in their 93-82 loss; it’s that none of them were Joakim Noah.

Noah’s 23-point, 21-rebound, 11-block triple-double was the best game of his career, and it comes in a year where Noah has defined the Bulls — both their successes and their ills. Luol Deng still leads the team — and the league — in minutes, but Noah is a 7-footer who’s seventh, and no one has been asked to do more amid the changes to Chicago’s roster. The increase in Noah’s playing time is easily attributable to the departure of Omer Asik. Without a reliable backup center, Noah has been forced to serve as the Bulls’ defensive anchor for more than 80 percent of games (Noah’s 38.4 minutes per game is eight more than he averaged last year). He’s responded with his best defensive season.

The other areas where Noah’s role has grown are less expected. Without Derrick Rose to control the Bulls’ offense, much of the departed playmaking and possession usage has fallen on Noah. A good portion of the team’s offense has become a pass to Noah in the high post, after which he’ll turn to face the basket, and then look to create. He’s not scoring at a higher rate, but for a center, his assist numbers have become, frankly, ridiculous. Noah assists on 17.7 percent of his teammates’ field goals while on the court. He’s one of the best passing big men in basketball, and this year, he’s gotten to show it off.

All this was rewarded with Noah’s first All-Star selection, and predictably, his play in the All-Star Game was like his play in every game — relentless. That lack of an effort-dimmer — for Noah, for coach Tom Thibodeau, for the Bulls — is part of what brought the Bulls to where they were Tuesday night against Cleveland. With Taj Gibson out of the lineup, the team’s bench was even shorter than usual. Noah logged 41 more minutes, and by the game’s second half, the wear from the season’s first 56 games was evident. Defensive rotations were a step slow, passing lanes were an inch too wide, and a youthful Cleveland team was too much, even without its star. That Noah is currently dealing with a nasty case of plantar fasciitis didn’t help either.

When I got to the United Center last night, I expected to see a game between two teams moving further down the spiral. It was evident early on, though, that just wasn’t going to happen. Noah’s historic night started quietly — there were scattered blocks, and a few tip-ins throughout the first half — but his effort was anything but. A few minutes after the Sixers were done staring up at the video board, Jrue Holiday had the misfortune of picking up his dribble near the Bulls bench following a pick and roll. As Thibodeau screamed and waved his arms behind him, Noah screamed and waved his arms in front of him, and I struggled to imagine a less enviable position on a basketball court.

Rumblings about the triple-double started at the beginning of the fourth quarter. Two people in the row behind me noted that he better get it, and while I didn’t say anything, I hoped the same. The cheers came when Noah got his 10th block — one that required a hedge, a recover, and all-around perfect defense — but my favorite was the ninth. With his right hand, Noah sent Jeremy Pargo’s layup straight down into the hardwood and knocked it back inbounds. On the other end, two quick passes led to a Nate Robinson 3, and the Bulls’ lead was nine with 6 minutes left.

The triple-double was one thing, but how Noah got his 20th point just about defined his night. Up nine with 5 minutes left, Noah set a screen for Jimmy Butler low on the left wing, and as he rolled, he tried three different times to get position on the block. When he finally did, Butler hit him with a bounce pass, and Noah spun to the baseline for the layup and the foul. As he walked to the line, chants of “Noah” began.

The Sixers didn’t let the game’s final minutes go. Philly fouled several times in the last 120 seconds, and each one was a chance for Thibodeau to take Noah out and provide some recognition from the sparse crowd that remained. When Kirk Hinrich rebounded Holiday’s miss from 25 feet with 14 seconds left (an attempt Noah tried to block three times), it seemed like this was the perfect chance. But there Noah stood, on the block, hands on his hips. When the second free throw went down, the Bulls center was the first one down the floor, and when Holiday missed, Noah was there for the rebound.