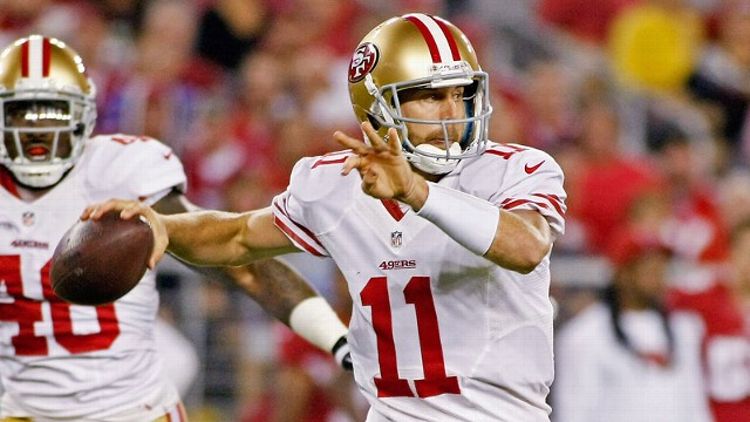 The NFL offseason is fundamentally about one thing: hope. The mantra of “Any Given Sunday” is expanded to “Any Given Season,” and the new — new rookies, new facilities, new schemes, new management — is the stuff those dreams are made of. But the most powerful offseason story lines, both in depth and on-field potential, are ones of redemption. Alex Smith’s impending trade to the Kansas City Chiefs to play for Andy Reid offers that chance for both men.

Smith’s story is, by now, well known. A former no. 1 overall pick by the 49ers, he, like the rest of the organization, stumbled around for several years until Jim Harbaugh became the head coach before the 2011 season. That year, Smith flourished in a game-manager role as the 49ers won 13 games and were a few special teams miscues away from playing in the Super Bowl. In 2012, Smith was better in almost every statistical category — completion percentage, yards per pass attempt, an impressive 104.1 passer rating — until he got hurt … and never regained his job, as the young, fleet-footed, strong-armed Colin Kaepernick took over and led the team to the Super Bowl.

Smith isn’t yet 30, and a marriage with new Chiefs coach Andy Reid’s offense seems — on the surface, at least — like it has the potential for sustained success. Reid is a stalwart of the old West Coast offense, the one developed by Bill Walsh and then carried throughout the NFL by protégés like Mike Holmgren, Mike Shanahan, and, of course, Reid, who spent the last 14 seasons as head coach of the Eagles. Smith seems like the model West Coast offense quarterback — smart, accurate on underneath throws, with good feet and quickness. The scouting report on Smith sounds a lot like one for another great West Coast offense quarterback — Joe Montana.

Reid and the rest of the Chiefs organization had the last several months to evaluate quarterbacks — including Matt Cassel, who is still on their roster — and by their actions, they clearly decided Smith is their guy. They could still end up drafting a quarterback, but there’s no doubt that Smith will be Kansas City’s starter on opening day. In making that decision, I don’t think you can underestimate how much Smith’s brain factored in to the equation. Reid’s offense is from the tradition that has lots of plays with lots of words, and Smith’s experience should enable him to audible plays and make changes at the line to put the Chiefs in position to succeed. Reid’s offense in Philadelphia was in the top 10 year-in and year-out, and if Kansas City can surround Smith with some playmakers — keeping Dwayne Bowe around is a good start — there’s no question it can improve significantly.

But there are lingering questions about both Smith and Reid. I’ll let others address whether the Chiefs overpaid for Smith, but I’m still not so sure that the fit is as good as it would seem. As is West Coast offense tradition, when Reid’s offense was at its best, it was as much about throwing vertically — with deep passes to Terrell Owens or DeSean Jackson breaking open a game — as it was about short passes underneath. Smith has never been known for his ability to throw the ball down the field. And of course, one of the biggest knocks on Reid in Philadelphia was that he would never stick with the run; much of Smith’s success in San Francisco came when supported by Harbaugh’s deep commitment to a power running game.

This is the specter that hangs over this trade and the marriage of Smith and Reid: the specter of, well, Jim Harbaugh (scary thought). In his first five seasons, Alex Smith and the rest of the 49ers were without an identity. When Harbaugh came in, he famously simplified the passing attack for Smith. He took all the elements of an NFL passing game but made it more creative and more user-friendly, particularly when Smith and his receivers had to defeat an oncoming blitz. Under Harbaugh, Smith’s efficiency metrics jumped significantly, but will he regress when out from under Harbaugh’s wing?

And if so, what would that say about the approach of Reid and the coaches in the older West Coast tradition? The common wisdom used to be that it took a quarterback three years to learn and become proficient in that system; nowadays if it takes three years, you’ve already been fired for one, maybe two. When you couple the instant success of quarterbacks like Russell Wilson and Kaepernick as passers — as well as Smith’s fast turnaround under Harbaugh — with trends by teams like the Ravens, Broncos, and Patriots to become faster and simpler on offense, it at least raises the question whether it is time for Reid’s more traditional, volume-based West Coast approach to go the way of all football innovations that are no longer new: Evolve again or die. If Smith flops under Reid, it may be Harbaugh whose reputation benefits most.

Given its recent history, Kansas City is, of course, a tough place for anyone to succeed, and if they fail to improve, it may be unfair to pin all the blame on the marriage of Reid and Smith. Still, the offseason remains a time of optimism, and this year, that’s no different in Kansas City.

We Went There: Joakim Noah's Career Night, Just When the Bulls Needed It