We Went There: Caps vs. Rangers, Puck vs. Steve Oleksy’s Face 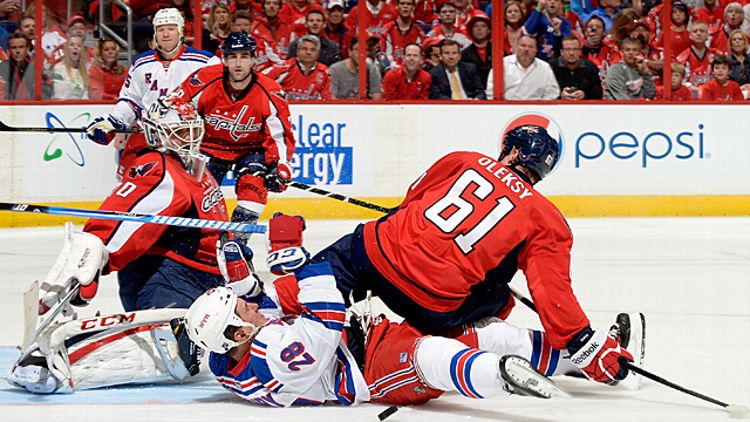 The opening game of the Rangers-Capitals first-round series was also the first playoff game for Oleksy, a 27-year-old defenseman from Michigan who’d signed with Washington only this March. With 5:39 left in the second period Thursday night, Oleksy found himself with the puck at his own blue line, and with two New York Rangers closing on him fast. He also saw Washington center Marcus Johansson splitting the defense behind them. It was a pivotal point in the game, as the Capitals had outplayed the Rangers in the first period, piling up nine shots on goal before New York could muster even one and, of those nine, at least six were legitimate scoring chances. But Washington went into the first break trailing 1-0 because Carl Hagelin of the Rangers got a quirky bounce off the end boards and managed to wrap a shot around Capitals goalie Braden Holtby.

“We were fast out there, fast with our feet, chipping pucks in. We were fast out of the neutral zone. Our style through the regular season, we stuck with it tonight. We were able to generate a lot of speed.”

After Alex Ovechkin neatly chipped in the tying goal over Henrik Lundqvist’s leg, the Capitals had to face a two-man disadvantage for 39 seconds, and then a simple power play for another minute. When the Rangers failed to score, the entire game turned, and Oleksy had the puck and Johannson was away. Oleksy zipped the puck dead between the two onrushing defenders, and Johansson put the breakaway home for a 2-1 Washington lead that became 3-1 barely a minute later. Jason Chimera spun at the left boards and put a shot past Lundqvist through a brilliant screen by Mathieu Perreault, though it’s unlikely that, when he launched the puck, Chimera even saw Perreault, let alone Lundqvist. He might as well have been trying to hit Baltimore. But Oleksy’s pass was deft and brilliant, and something of a surprise even to his teammates.

“We didn’t know he had that kind of sauce in his bag,” said Brouwer. And, not for nothing but, someday, some enterprising linguist is going to get an entire career out of hockey metaphors.

“Marcus did a great job finding the lane there,” Oleksy said. “I think they kind of lost him there for a second, and he allowed me to take a chance to make that pass. I was able to calm it down a little bit and get my head up and take an extra second to let him get going for a minute and let him get into stride.”

Which, however, is about where the Hockey Gods came in. The cheers for Oleksy’s play had barely died away when he dropped to block a shot by New York center Derick Brassard. Brassard shot the puck high, and Oleksy took it right on the jaw, which meant that he had to talk about his game-changing play later with the general appearance of a man who shaved that morning with a lemon zester.

“That’ll make sure I stay in the game,” Oleksy said, managing an enthusiastic, if fairly lumpy, smile. “It’s one of those things, you go down and block and he was trying to go high, and luckily, there wasn’t more damage. The male-modeling career was gone a long time ago, the way I cut and bruise. I waved bye-bye to that. That’s the way it goes, you’re going to go through things like that through playoff runs.

“Yeah, I checked my teeth, and I cut pretty easy, so I made sure I wasn’t leaking too bad.”

“That’s how it goes,” Brouwer said. “Can’t get too high. Can’t get too high on yourself. He’s been doing that all year long, blocking shots. He’s taken a few stitches with high sticks, fights, battling hard. He wants to stay here and he wants to make a name for himself, and that’s what he’s doing.”

For a couple of teams that most people around the NHL long ago had decided would enliven the first round of the playoffs with at least an entertaining string of general hooleys, the first game of the series was a relatively placid affair. Oleksy vs. Puck was the best bout of the night. This was especially true from the New York side of things. The Rangers came to play Thursday night only on two specific occasions — when Hagelin gave them the lead, and during that extended power play that Washington killed off. Otherwise, the Rangers were a strangely vacant bunch all night. They took six penalties, most of them of the routine and docile variety, meaning that all the penalties did was give opportunities to the deadly Washington power play. They didn’t shake up the flow of the game. They didn’t establish a change in its nature. They were just useless penalties. “We can’t take that many penalties in the game,” said New York coach John Tortorella, by which he meant, “We can’t take that many penalties without at least somebody throwing a punch.” I expect a different tone to the proceedings hereafter. Boring the Hockey Gods is the most dangerous thing of all.