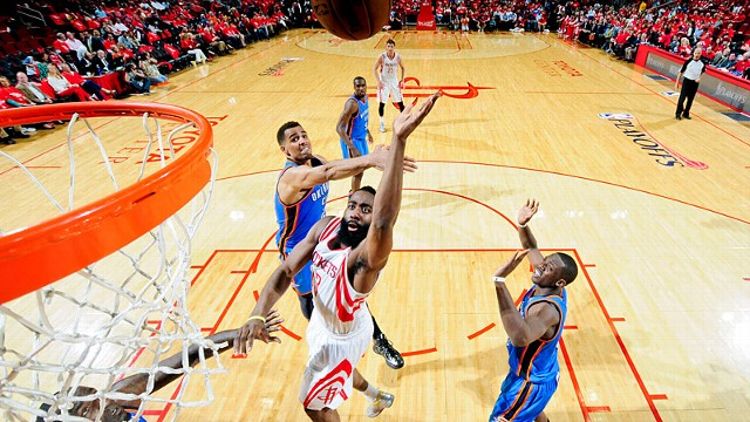 This isn’t Miami or San Antonio, where there is a system of constant movement, screening, and side-to-side action that functions in the same general way, creating the same efficient shot types, regardless of which parts you plug into it. And so the Oklahoma City offense without Westbrook has become drudgery for Kevin Durant. He’s isolating much more, which means the team is isolating much more — on nearly 22 percent of its offensive possessions in three games without Westbrook, up from about 14.5 percent in the regular season, per Synergy Sports. They’re getting fewer shots out of the pick-and-roll or via transition, two Westbrook specialties, and Durant is not exaggerating by much when he suggests Houston is quadruple-teaming him.

And guess what? The offense is still working fine. The Thunder have scored 106 points per 100 possessions in three games without Westbrook, a number that would have ranked seventh overall in the regular season. That’s a step down from Oklahoma City’s regular-season mark, no. 2 overall, but any team adjusting to a dramatically different reality on the fly has to be happy maintaining a top-10 scoring rate at the very start of that adjustment process. That’s not to suggest everything is happy on that side of the ball. The Thunder will wear Durant down playing this way, and Oklahoma City will face much better defenses if it survives this round — defenses more accustomed to throwing the kitchen sink at a star player without opening up fatal holes elsewhere on the floor.

But the Thunder aren’t in trouble against the Rockets because their offense is sputtering. They’re in trouble because their defense, much improved during the regular season, has fallen apart against Houston’s small-ball, spread-the-floor attack. Since its blowout win in Game 1, Oklahoma City has allowed 105.9 points per 100 possessions, and that number has shot up to just more than 107 in three games without Westbrook, per NBA.com. That’s Bobcats/Kings territory, and though Houston ranked among the league’s half-dozen best offenses all season, it’s concerning that an allegedly championship-level defense playing with postseason focus hasn’t managed to drag that offense down a level or two.

It’s unclear whether Westbrook’s absence has had much to do with this slippage, but Houston has goaded the Thunder into an alarming number of basic defensive breakdowns. There’s no real pattern to it, either; the Rockets are shredding small lineups and big ones, including the Thunder’s new starting lineup, with Reggie Jackson in Westbrook’s place. It’s tempting to blame the defensive struggles of the new OKC starters on Kendrick Perkins and/or the Perkins–Serge Ibaka big-man combination, because Miami small-ball lineups decimated that plodding Perkins-centric group so badly in last season’s Finals.

And the big-versus-small dynamic has hurt at times, and in very glaring ways, which is why Scott Brooks has gone to his own small-ball lineups more as the series has gone on — a decision that punts a clear edge the bigger groups might have on the offensive glass, where Ibaka has taken advantage of the Rockets’ decision to hide James Harden on him. But, again, offense hasn’t been the issue here.

Ibaka has generally defended either Chandler Parsons or Francisco Garcia on defense when the Thunder go big, but he has had trouble at times locating the right player in the transition from offense to defense. That confusion has a bunch of ripple effects. The Thunder have flat-out lost one of those wing shooters, yielding a few wide-open 3-pointers in semi-transition. Ibaka has at times gotten stuck defending Harden, a mismatch the Rockets have coyly produced by having Harden “defend” Ibaka so that the two will be next to each other during those chaotic transition moments. And while Ibaka can do fine in that assignment — he can certainly outdo Derek Fisher or Kevin Martin — Harden’s quick jab steps have spooked him into surrendering some precious air space on a few Harden 3-pointers.

There have also been some Finals Flashbacks, plays on which Ibaka will needlessly stray far into the paint, making himself vulnerable to kickout passes the Rockets are seeking. Yes, big-versus-small can be treacherous, with trade-offs on either end and a certain risk-reward calculus every team must perform before diving into this offbeat matchup clash.

But I’m not sure any of those trade-offs explain elementary failures of communication like the one here, from Game 5, between Durant and Perkins on a simple Parsons/Omer Asik pick-and-roll:

The breakdown is obvious: Durant assumes the two defenders in the play will switch, and so he abandons Parsons to guard Asik rolling into the paint. The problem: Perkins doesn’t seem to be in on the strategy. He pauses at the elbow area, as if he’s going to try to contain Parsons off the dribble while still keeping Asik within arm’s reach — standard big man pick-and-roll stuff, built on the assumption that Durant will stick with Parsons. That leaves Parsons wide open, and as a giddy Parsons rises for an open 3, Perkins realizes a crisis is afoot, and springs into a panicky lunge toward Parsons. (Side note: Parsons needs a nickname. We suggest “The Chanimal.” Or “3Chan.org.”) That sudden burst in speed is enough to stop the immediate threat, but it leaves Perkins leaning the wrong way, and Parsons takes advantage with an artful little give-and-go score. Again, very basic stuff.

Ditto for what happens here on the right wing, where Harden takes a very casual Garcia screen and suddenly finds himself open for a 3-pointer. As you might guess, leaving a team’s best scorer unguarded from long range is generally a bad strategy:

The breakdown is blatant: Thabo Sefolosha, guarding Harden as usual, doesn’t try to get over the screen, suggesting he’s under the impression Garcia’s defender (Martin, just an atrocious defender) will jump out on Harden. And Martin, for his part, appears prepared for the switch in assignments, only he drops way down toward the paint, as if Harden is a sure bet to dribble in that direction instead of jacking a droolworthy triple.

You want more? OK! It’d be hard for any team, let alone a would-be title contender, to botch this dribble handoff between Carlos Delfino and Garcia any worse than Martin and Durant do here:

An explanation: Durant starts off guarding Garcia, the eventual shooter, but he comes to a split-second standstill upon the handoff — suggesting, again, that he expects Martin to switch onto Garcia and prevent the open shot. Durant realizes right away no such switch is occurring, and that he better move his ass into range to contest the shot. But he’s too late, and you can see in the clip that he gestures angrily at Martin once the shot hits bottom.

And this … this is unspeakable:

Tom Thibodeau wouldn’t be able to sleep for a month if the Bulls committed a breakdown like this. This is a pick-and-roll on which no member of the Thunder helps on Asik rolling into the lane — until Jackson does so, much too late, and with a dumb foul as the cherry on top of this shit defense sundae. In Oklahoma City’s defense, the helper here would normally be the defender in the weak-side corner. And since Garcia finally dribbles left around the Asik screen, the help defender in this case would be Ibaka — parked on the very dangerous Parsons in the right corner, with his back to the proceedings.

The common theme running through all of these breakdowns — and there have been many more — is not big-versus-small, or poor ol’ Perkins; rather, it’s a lack of clarity and a preponderance of confusion. Offenses in the NBA are so good that a moment of hesitation — just a split-second of misunderstanding — is fatal to an NBA defense. The very best defenses — Chicago, Memphis, Boston, Indiana — are built upon a series of hard-and-fast rules designed to eliminate all confusion. There are general principles, and sub-rules specific to particular opposing players and pet plays. But they are clear, and they are constant, and if you break them, you generally don’t play much. The Thunder have not looked like that sort of team, and that is disturbing at this stage of the season; it’s not as if Westbrook’s minutes are going to guys who haven’t been in Oklahoma City for large portions of this season and last.

Westbrook’s injury does have a trickle-down effect. Westbrook is only an average defender, prone to some of the positional issues highlighted here, but teams fear his crazy athleticism, and that almost unique combination of size, speed, and strength allows him to disrupt plays even after falling a half-step out of position. The Thunder have very little choice but to give at least some of his minutes to players who do not bring that combination of attributes — Fisher, Martin, DeAndre Liggins, etc.

And taking away the Thunder’s second-best wing/guard obviously removes a potent ingredient from Oklahoma City’s small lineups — the five-man units that are going to have to carry the Thunder tonight and (if necessary, gulp) in Game 7. But Westbrook is gone, and some of these mistakes have nothing to do with his absence, anyway.

So what’s the solution? The bulk of it is probably just to be better — reinforce the rules, or institute new ones, make sure everyone’s on the same page, cut out the stupidity, etc. Brooks may want to think about a quicker hook on the new starting lineup, surrendering points at an embarrassing rate, but he already went in that direction in Game 5, when he went small less than two minutes into the third quarter. And as is always the case with tiny playoff sample sizes, this trend — the sieve-like play of the starting lineup — is only a couple missed jumpers away from reversing itself.

Brooks might also consider going big more often instead of using a black-and-white, either-or approach. Nick Collison played just seven minutes in Game 5, and the Ibaka-Collison pairing has logged just four minutes in the entire series after logging nearly 500 in the regular season. Why not give this pair a shot, especially during those few minutes when Durant rests? I’m not sure what the point is of going small without Durant at power forward, anyway.

The Thunder have also been switching very readily on totally nonthreatening and slow-moving guard-guard screens, even if doing so means someone like Fisher or Martin shifts onto Harden. They got lucky that Harden didn’t burn them too badly in Game 5, but some of the open looks the Rockets got by exploiting those switches are going to fall if Harden sees them again:

The Thunder have actually done quite well on defense with the Fisher-Martin pairing on the floor as part of smaller lineups, but that seems unsustainable, and Brooks worked in Game 5 to have one of Liggins and Sefolosha on the floor at all times. Still, the Fisher-Martin duo is vulnerable by nature against a Houston team that gives all its wings freedom to attack off the bounce, and we’ve yet to see Brooks experiment with a lineup that includes neither Fisher nor Jackson. He almost certainly won’t do so now, but if Durant is running 90 percent of the offense anyway, a lineup like Durant-Sefolosha-Martin-Ibaka-Collison might provide an interesting combination of offense and defense.

But these are just rotation tweaks. Those can have an impact game-to-game, but in the bigger picture, the Thunder just have to be more sound on defense. They might survive Houston, but they’re not going further than that with a porous defense and the most predictable offense of any playoff team.