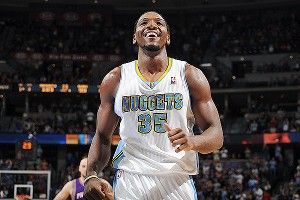 I ride or die for the Sixers. Unfortunately for me, they are currently riding a four-game losing streak that is probably going to kill me. Sometimes, when you are being raked over the coals by the team that has your heart, your mind wanders. And mine has wandered to Denver.

On Monday night, the Nuggets beat the Warriors, 123-84, behind a career night from rookie Kenneth Faried (27 points, 17 rebounds). If the Nuggets are a new team to me (and you, non-Nuggets people), that’s OK. They’re pretty much a whole new team to Denver, too.

It must be a living hell to be one of Masai Ujiri’s house pets. At any given moment, the Denver GM might just up and decide he’s not into hermit crabs anymore and, boom, you’re traded for an iguana, or a hamster. Since taking over the team, Ujiri has overhauled the Nuggets, getting rid of the 2010-11 core of Carmelo Anthony, Chauncey Billups, and Nene. The new arrivals are basically a who’s who of long athletic athletic freaks (Faried, Corey Brewer, Arron Afflalo), reclamation projects (JaVale McGee!), European imports (Timofey Mozgov, Rudy Fernandez), head cases (BIRRRRRDMAN) and pace-pushing point guards (OK, Ty Lawson). And Andre Miller (Andre Miller).

This extreme makeover might have been a case of Ujiri wanting to assert his executive authority. Or it could all be a domino effect from the Anthony deal; an on-the-fly rebuilding project. But it’s a perfect match of personnel decisions and head coach. George Karl has a little Larry Brown in him: He seems like the kind of guy who thirsts for constant turnover in players, and he also seems like the type whose message rings hollow after a couple of seasons. (Remember what I said about having a little Larry Brown in him.)

Whatever the reason, this Nuggets team is ridiculously fun to watch. With eight different players averaging more than 10 points a game, you never know who is going to have a big night. On Monday, it seemed like they all did. Granted, they were playing a comatose (possibly tanking) Warriors, but, on offense, the Nuggets were absolutely balling. For such a group of no-names and might-have-beens and could-bes, they attacked Golden State with so much confidence and flair: Danilo Gallinari, back from a thumb injury, crossing defenders over and going to the rim, McGee snuffing the life out of shots and getting rewarded for his defensive efforts with an totally profane alley-oop lob from Miller.

Then there was Faried.

The Warriors had no answer for his agility and explosiveness. In the post, on D, or recklessly attacking the paint, Faried was a monster; and the abandon he played with was perfectly in tune with the rest of the team. They might not be able to play the Warriors every night (to sleep, perchance to dream), but if the Nuggets can sustain this kind of energy, they will scare some more set-in-their-ways squads down the stretch. Sometimes you just need something new.