We Need a New Advanced Stat to Quantify Nick Young 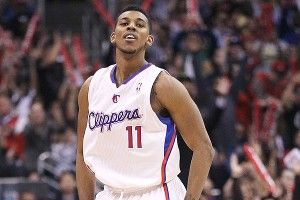 I have been staring at Nick Young’s box score, on and off, for the last couple of hours. Numbers are supposed to help us understand players, their performances, and their contributions and deficiencies. But to look at Nick Young’s stats from the Clippers’ Monday-night victory over the Thunder and say, simply, that he had zero assists, would be like saying Jack Kerouac’s On the Road is a story about a guy who needs a lift. There’s so much more to it than that.

Nick Young had zero assists Monday night. Zero is a pretty absolute number. It’s like, if you ask a guy how many men he’d shot in cold blood and he said, “Zero,” that means he hadn’t killed anyone in cold blood. But to say Nick Young had no assists Monday night is an insult to both the number zero and Nick Young’s performance. In fact, the assist column itself is an affront to Nick Young and the kind of progressive, avant-garde basketball he played Monday against the Thunder.

We need a new stat for Nick Young. I’m still workshopping it (and I welcome your constructive feedback in the comments), but I am thinking something like: LOAP. Lack of Assist Probability.

Regardless of who was on the court with Nick Young, who was defending Nick Young, how much time was left on the shot clock or in the quarter, or whether Nick Young’s astrological sign was rising or in some moon, Nick Young never even looked like the concept of passing the ball had ever been broached with him. I would go as far to say that Bizarro Nick Young — in the alternative reality in which Clippers coach Vinny Del Negro actually decides between unbuttoning the top button of his shirt OR tightening his tie but not doing both at once (MAKE THE CALL, VINNY) — still never passes. There is no version of Nick Young that does not single-mindedly look for his own shot. His dedication (albeit to himself) is almost beautiful to watch.

You know how in Star Wars when the Millennium Falcon jumps to hyperspace and the stars go blurring past? That’s what I think Nick Young sees when he gets the ball in his hand. On Monday a crazy thing happened: It kind of worked. The Clippers have been hampered by their lack of wing scoring at times all season. But if Young can be as efficient as he was on Monday night (7-for-10 from the floor), then you can almost forgive him for trend-setting in the burgeoning field of LOAP.

As teardrop jumper after teardrop jumper fell, it was hard to tell who to feel worse for: the Thunder defense, which had to contend with his offensive prowess, or his Clippers teammates, who had to act as bystanders.