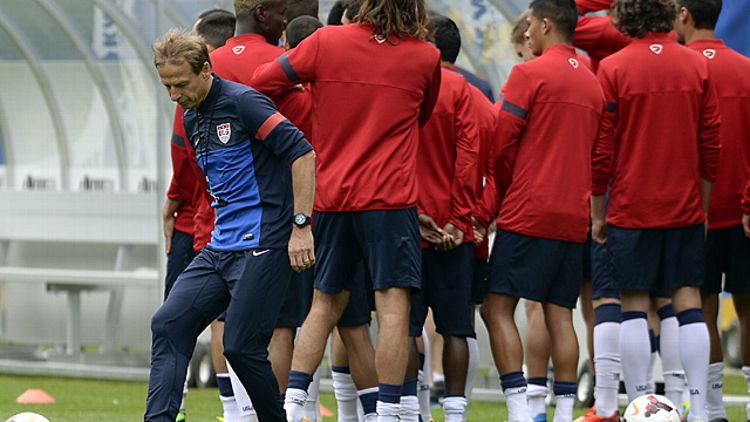 The United States men’s national team played 11 games in June and July, winning all of them. Along the way, the squad took home its first Gold Cup since 2007, had 15 players score a combined 35 goals, posted five shutouts, and conceded more than one goal only once. While Jurgen Klinsmann’s side had some stretches of shaky play (set pieces, set pieces, set pieces) with long periods of dominance, it was always good enough to win.

The question is whether the last two months indicate some sort of American soccer sea change, a tipping point in the Klinsmann-ification of the U.S. team, or merely a temporary new high-water mark in the never-ending struggle to raise the level.

This is a cop-out, but the correct answer is a little of both.

First, the bad. During the streak, the Americans played exactly one game against a team ranked higher than 39th in the world (a 4-3 victory against a depleted but still dangerous Germany) and exactly one game on the road (a 2-1 win over Jamaica). Those matches, which were victories no. 1 and no. 2, were the only ones in which the U.S. wasn’t a prohibitive favorite … and you could make a good case they should have won in Kingston.

But you can beat only what’s in front of you, right? And winning soccer games — not going unbeaten, but actually winning — is more difficult than one might think even against the minnows of CONCACAF. The U.S. tied the longest-ever regional win streak. (Spain holds the all-time record with 15. The U.S., which ended that run with a 2009 win in the semifinal of the Confederations Cup, could surpass La Roja in Panama on October 15.)

The takeaway from this summer isn’t the win streak per se, but rather how the U.S. played during the stretch. It wasn’t quite the Beautiful Game, but there were beautiful moments, especially in the Gold Cup. The team that played in that tournament — Landon Donovan facilitating; Eddie Johnson making runs off him; Joe Corona, Jose Torres, Mix Diskerud, and others adding creativity to the mix — looked dangerous and cohesive. Given the time they had to train together and the inferiority of the competition, it isn’t hard to believe, but it’s still nice to see. The conversation about developing an “American style” is an overheated and unnecessary absurdity, but adding imagination and flair to strength and athleticism will always be the goal.

A couple of factors helped the Stars and Stripes achieve the pretty passages of play. For one thing, the Gold Cup roster consisted almost entirely of young players trying to impress Klinsmann and older ones attempting to do the same. What’s the best way to impress your coach? Do what he says, which in this case was quick one- or two-touch passing, smart decisions on the ball, and hustle. Additionally, Corona, Torres, Diskerud, and the rest of the next generation boast the talent to succeed in this style at the Gold Cup level, and they showed it on the field. From a pure technical skill standpoint, the Americans are — inarguably — improving. Whether this group will be good enough when the competition becomes stiffer remains a question, but they individually (for the most part) and collectively (definitely) passed the first test.

Klinsmann, too, is growing into the role of head coach as he understands the talent he can deploy. On the A team, the defensive-minded midfield trio of Jermaine Jones, Michael Bradley, and Maurice Edu is gone, with the former two as the first-choice duo. They have more leeway to attack and are slowly learning to play with each other. The weeks spent together at the May/June camp helped tremendously. During the Gold Cup, Klinsmann did one better, tapping Kyle Beckerman as the sole defensive midfielder on the roster. The Real Salt Lake captain played the spot to perfection, and while he’s not good enough to start for the full team — sorry, he’s not — the Dreadlocked One is much more talented and subtle than he gets credit for. Other than Donovan, he was the team’s most important player during the run through CONCACAF.

(The only negative about the regional championship was the injury to Stuart Holden, who suffered a torn ACL in the final that will see him, once again, miss significant time. It’s a tough blow for a good player and a better dude who worked his ass off to get back onto the field.)

The U.S. is on the verge of August with an improving A team and a solid B team that some pundits suggested might beat the first-choice red, white, and blue. That’s a silly claim — look at how easily the best defeated Panama compared with the trouble the second-teamers had — but the talent pool grows deeper and wider, and will yet again with center back of the future John Anthony Brooks and 22-year-old forward Aron Johannsson committing to the U.S. in recent days. Klinsmann has more puzzle pieces than ever, and he used them effectively during World Cup qualifying and the Gold Cup.

From here, the road gets tougher. The win streak could end as soon as two weeks from now in Sarajevo because the opponent is excellent, Klinsmann will be experimenting, and the game is in Bosnia-Herzegovina on a Wednesday. Or the U.S. might not come out victorious against Costa Rica in San Jose, or Mexico in Columbus, two of the three most difficult Hexagonal round games. The quality of play could drop a bit naturally because the Americans won’t have the same amount of time together to prep, and it will be interesting to see how Donovan reintegrates with the starters. He should thrive with others able to shoulder some of the pressure, and don’t underestimate the chemistry he and Jozy Altidore have shown in the past, but it might take a few games before it comes together.

So what do we know? Mostly that this is a better, deeper team getting closer to its ceiling than it was two months ago. That isn’t saying much, but it’s not saying nothing, either. The Stars and Stripes made about as loud of a statement as they could given the competition and the circumstances. This squad won’t win the World Cup. It won’t go toe-to-toe and pass-to-pass with Spain, Germany, Brazil, etc., playing quick, smart, stunning, attacking soccer while winning the hearts and minds of fans worldwide. But the Hexagonal standings look lovely with the Americans poised to easily qualify for 2014, and the hardware the squad won was certainly beautiful. That’s what matters. The rest is rhetoric.

This Is Easily the Best Fist Pump of the Year