Waiting for the Dodgers’ Eventual Doom 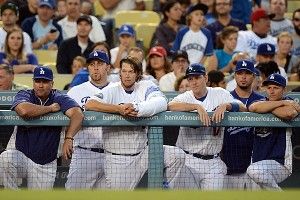 On Monday in Los Angeles, the sun was just starting to set after a 92-degree day, but the Short Stop bar was already glowing like a jack-o’-lantern. With less than an hour until first pitch, bartender Joe Skyward called out the latest news from the other side of the country: The St. Louis Cardinals were leading the Cincinnati Reds 3-1 in the third. The Dodgers fans who filled the Short Stop paused for moment to process the information, and then let out resigned groans. Although L.A. was on a five-game winning streak, a victory in that night’s series opener against the San Francisco Giants was essential if the team wanted to keep their mathematically unfavorable hopes for the National League’s second wild-card spot alive. And if the Dodgers didn’t win and things kept going the way they were in St. Louis … then this long, often frustrating season would be over. A total bummer.

Still, as this possibility loomed, the mood in the Short Stop was chatty and upbeat. Even the guy peacocking in a bright orange throwback Giants jersey seemed at ease. Patrons downed $2 beers as Allen Toussaint’s “Last Train” and Frank Ocean’s “Super Rich Kids” played on the jukebox. The small talk was focused more on backpacking through Europe than why the home team tanked during the second half of the season.

By 6:45 p.m., most tabs were closed and credit cards were returned to wallets. The tamale man made his final rounds, pushing the cheese-and-jalapeño numbers. At 7:05 p.m., the channel switched from the Bears-Cowboys MNF matchup to the game at Chavez Ravine. With the sound muted, the jukebox spit out “Don’t Cha Stop” as Aaron Harang took the mound. The Short Stop had largely cleared out, and these customers were probably bigger fans of beer than baseball; most of them sat perched on their barstools, gazing ahead as the game played out on the TV. The staff took this opportunity to prepare for the next rush, which was due in about two hours.

The Short Stop is on Sunset Boulevard in Echo Park, less than a half mile from Elysian Park Avenue, which leads up to Dodger Stadium. There aren’t many bars in the area, and it’s one of the few that actively courts the pre- and post-game crowds. It’s not a sports bar; there are no endless wing specials on Sunday afternoons during football season or sponsored March Madness contests. But for six months out of the year, it is a Dodgers bar.

The Short Stop is also an anthropological thermometer, an unscientific tool to gauge the climate of the neighborhood it inhabits. It’s said that the bar changed its name to the Short Stop the year the Dodgers moved to Los Angeles. Players used to come in for drinks. (Supposedly, Don Drysdale signed one of his contracts in the room that now houses a pool table and photo booth.) A bail bondsman named Mike Balmer owned it for decades, and as crime increased in Echo Park during the 1980s, it became a cop bar. Among the artifacts left over from that time are railings built from billy clubs, walls decorated with the badges of officers from around the country, and a couple bullet holes. Legend has it that a clueless perp once tried to stick up the place using a comb concealed underneath his shirt. He started to book it out the door when the customers sitting at the bar flashed their badges and he was fatally shot in the back. There’s still a sign by the front door that reads, “Use a Comb, Go to Heaven.”

During that era, the Short Stop was notoriously hostile to outsiders, whether they were curious locals or elderly couples who mistakenly thought it might be a hospitable place to stop for a cocktail before catching the opera downtown. After the Rampart scandal hit in the 1990s, giving the city’s law enforcers an even worse reputation, the cops stopped coming. Internal Affairs was paying closer attention (there were rumors of cameras in the hills pointed at the bar) and reporters started coming around looking for information. Balmer eventually sold the bar to some friends who lived in the neighborhood. The group included Greg Dulli, lead singer and guitarist for The Afghan Whigs. “We all pooled our money. We didn’t know what we were doing, none of us had ever owned bars before,” co-owner Dave Neupert says. “We got it so cheap we were able to figure it out as we went, but we knew the hills were filled with young people looking for places to go.”

Their first steps were to clean it up a little, turn down the lights, and change the jukebox. This new noir-ish, consciously dive-y dive bar incarnation of the Short Stop took off instantly, drawing in the musicians, artists, and members of arts-related industries who continued to settle farther east in the city — stocking the waters first in Los Feliz, then Silver Lake, then Echo Park.

My fiancée (now my wife) and I moved to Angelino Heights, an Echo Park subsection, when we first came to Los Angeles. It was 2003 and we were broker than a broke-ass joke. Going out to the movies was a rare splurge, we didn’t have cable, and when we got tired of watching the same 10 episodes of Mr. Show on DVD, we’d walk down the hill, past the Victorian where a dude with dreads taught unsanctioned bikram yoga classes, to get a cheap drink special at the Short Stop. It helped us feel like we were actually living in this city, not just holed up in our apartment trying to figure out ways we could afford to stay here.

After two years, we eventually had to leave our place in Angelino Heights — it’s a long story involving a two-month span of constant rain, a collapsed bedroom ceiling, a usually absentee landlady making an unannounced visit, and an adopted dog that our lease didn’t allow — and afterward we didn’t go to the Short Stop as much, but I still tried to keep up with what was going on there. After a multi-year process, it finally got a cabaret license and a dancing permit (something you don’t have to worry about anyone busting you for when your clientele is all cops), and DJs started having regular nights there. They put a sandwich board out on the sidewalk on game days to entice Dodgers fans who weren’t coming by already. Lines started to run down the block during prime Friday- and Saturday-night party hours. Friends told me that the demographics were actually shifting younger — it wasn’t just that we were getting older. Yelp reviewers stopped mentioning being scared to park their cars in the neighborhood as much but still found ways to work in some not-so-subtle racism. In February of this year the L.A. Weekly named it the city’s no. 1 bar most likely to get you laid. “When we moved in, gentrification had just started [in Echo Park],” Neupert told me. “For the Latino families, a lot of those kids who were 10 or 15 then are now 20 to 25, so there’s a whole Latino population that’s coming here, and that’s a big change from five years ago. Now it’s a real mix of the neighborhood. It’s the real city.”

By 9:20 on Monday night, that mix started to make itself apparent. With the Cardinals already winning, the Giants tied the game at 2 in the eighth inning. The crowd inside got thicker by the time the Dodgers managed to load the bases in the bottom of the ninth. The attention was on the TVs, not the dance floor. As a chant of “Fuck the Giants” was picked up around bar, Elian Herrera drove in the winning run and the DJs pushed forward with Isaac Hayes’s “Hung Up on My Baby.”

A Dodgers win meant more people would come to the Short Stop after the game — and they would be in a better mood. They wouldn’t resign themselves to end their night with a dry suadero taco in a Vons parking lot before jumping on the freeway. And soon those fans were on the dance floor in matching jerseys (Ethier for her, Rivera for him), while a full crew of two bartenders and two barbacks kept the drinks moving.

L.A. was unable to keep the ninth-inning magic alive on Tuesday night, and lost by one with Dee Gordon stranded on second base. The defeat killed the slim possibility for a Dodgers postseason berth. But at 11 p.m., when things are getting going and maybe you do or maybe don’t have to have a job to show up for in morning, you don’t think about that future.

The Trenchie Awards: The Pats' O-Line, Cameron Wake, and the Best Line Play From Week 4