The Trenchie Awards: The Pats’ O-Line, Cameron Wake, and the Best Line Play From Week 4 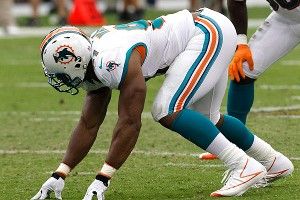 Since 2007, in games that aren’t Super Bowls against the Giants, the Patriots’ offensive success has been predicated on making the other guy wrong. From week to week, Bill Belichick puts on whatever weird, hooded sorcerer outfit he wears around Foxboro and the Pats build a game plan designed to turn the tenets of an opposing defense into weaknesses.

For a while, that meant exploiting inside matchups with Wes Welker. Last year, it was letting Rob Gronkowski render safeties too small and linebackers too slow. On Sunday, it was making the Buffalo Bills pay for dismissing New England’s ability to run the ball. The Pats ran for 247 yards on 40 carries and spent the second half showing that no matter the deficit, they’re comfortable taking what a defense gives them.

The offensive line — which included the how-is-it-fair-that-he-can-do-this-too run blocking of Gronkowski — played well as a whole, but two players and two plays stood out, and those plays came back-to-back early in the second half. 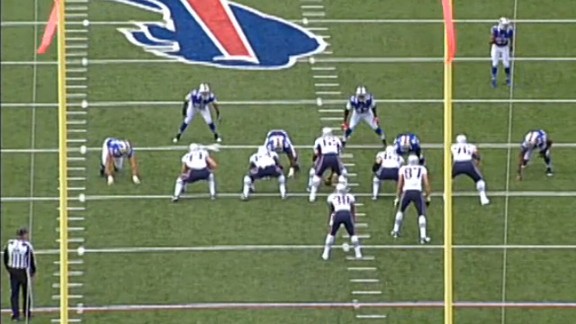 Above is a first-and-10 at the 10:11 mark in the third quarter, with the Patriots trailing 21-7. Down two scores, a lot of teams would consider it time to abandon the run, but considering what Buffalo is showing here, there’s no reason to. The Bills — as they would for much of the second half, even as New England erased the deficit — have only six defenders in the box, and one of them is 220-pound Bryan Scott. There are six blockers for the six box defenders, and each already has an advantage based on where the ball is going. The Pats have won before the ball is even snapped. 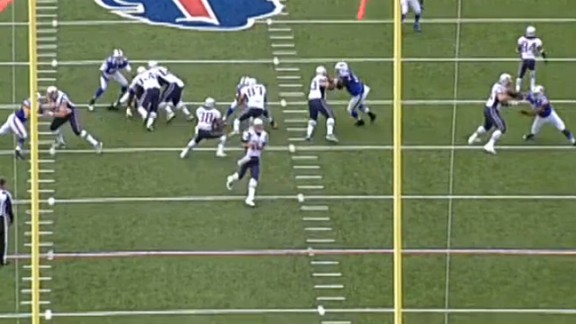 Right tackle Sebastian Vollmer kicks out the defensive end, right guard Dan Connolly turns the 3-technique tackle lined up on his outside shoulder, and Gronkowski leads up on Scott. Because each defender is accounted for, a hole forms on the backside between Connolly and Vollmer, and Brandon Bolden is free to make the easy cutback on his way to a 27-yard gain. The best block on the play, though, goes to Donald Thomas and Ryan Wendell. In this scenario, center (Wendell) and left guard (Thomas) are responsible for the 1-technique tackle (Alex Carrington) lined up on Wendell’s inside shoulder and the backside linebacker. To account for both, the two linemen execute a combo block, meaning both players engage the defensive tackle before the center moves off to meet the flowing linebacker. Ideally, that task is made easier by taking Carrington and driving him right into the linebacker’s lap, and that’s exactly what happens here. Wendell and Thomas take Carrington a full four yards off the ball, and the linebacker is caught in the traffic. Wendell’s job is already done. It’s likely that while watching the film, the Pats’ O-line coach had trouble controlling himself while watching specks of black rubber spit up from Carrington’s cleats as they dragged along the turf. 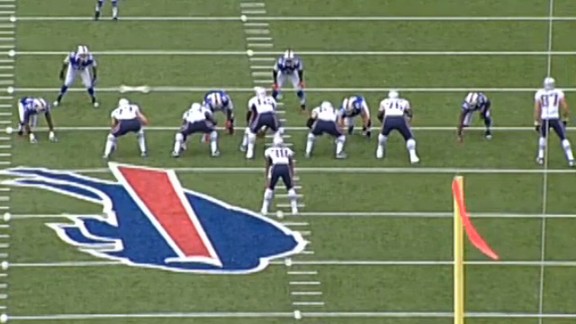 The next play was similar in that the Pats had six defenders for their six blockers, but the difference is that for several of the offensive linemen, the pre-snap advantage was gone. The image above is New England’s formation as they prepare to run a toss sweep to the right. Gronkowski (right) has an angle on the defensive end, but the others are tasked with difficult blocks. From left to right, Thomas, Wendell, and Connolly all have assignments to their play side. 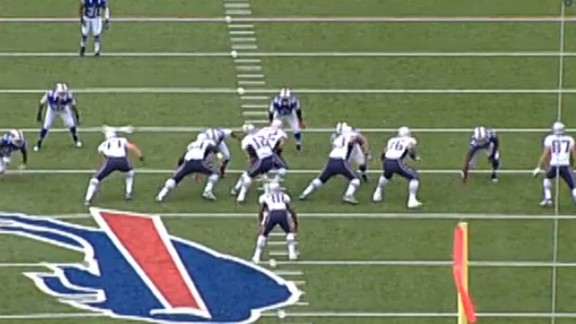 That problem is alleviated quickly. Each lineman has an excellent first step, and as Thomas and Connolly both give themselves a chance to reach their respective defensive tackle, Connolly starts his path up to the linebacker. 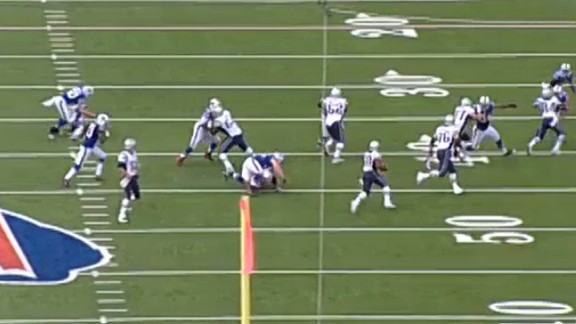 Here’s the final product. Thomas has fully reached his 1-technique, Wendell gets to the linebacker and sustains his block, and Connolly has gotten to the edge of his 3-technique. It all allows Bolden to get loose around the outside for 13 yards. There’s something to be said about putting players in positions to succeed, and against these six-man fronts, the Pats often did that. Still, on plays like this, they’re dependent on individual players winning individual matchups, even when placed at a disadvantage.

Geno Atkins, Cincinnati Bengals
Tied with the Cardinals atop the list of sack totals, ahead of both the Bears and Texans, is a defense that hasn’t gotten nearly the same attention as the other three. The 3-1 Bengals have tallied 16 sacks in their first three games, and many of them have been because of Geno Atkins. Coming off a Pro Bowl appearance in his second season, Atkins already has five sacks after tallying only seven and a half all of last year. He added another against Jacksonville on Sunday — late in the fourth quarter, rain coming down, as the pocket collapsed around Blaine Gabbert — but as he has all season, Atkins affected every part of the Cincinnati pass rush, even when he wasn’t the bringing down the quarterback. 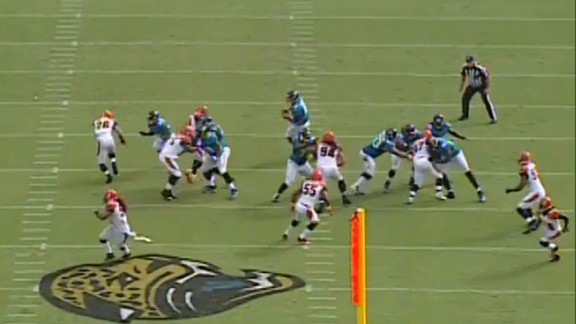 Sack totals, while sometimes telling, rarely make up the whole story. On this play, a third down in the first quarter, Cincinnati came with five rushers. To go along with the three down linemen (right end Michael Johnson drops back into coverage), linebacker Manny Lawson and a defensive back come off the edge of the offense’s right side. In theory, the Jags should have no trouble picking this up. Including two tight ends and a running back, Jacksonville has seven blockers for the Bengals’ five rushers. The problem is that two plays earlier, Atkins tore past the left guard so quickly that Gabbert hadn’t even hit the back of his drop when he was flushed from the pocket. The short-term reward was a nine-yard scramble, but the real affect is felt here. As Lawson comes off the edge, four Jaguars are busy with Atkins on the right side. That five-on-seven becomes a four-on-four, and Lawson wins out. 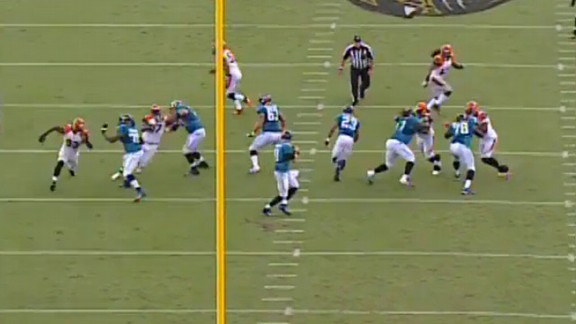 Jacksonville didn’t fare much better when it did leave Atkins one-on-one. On this first down in the second quarter, Atkins is lined up as a 3-technique on the offense’s left side, and it takes one simple move to the outside to make his way to the quarterback. This rip is just one of the several moves Atkins displayed on Sunday. The flushing of Gabbert in the first quarter came on a club and rip to the inside. An incompletion in the third quarter was the result of a straight bull rush. Atkins is strong and quick, and he uses his hands to the point that he’s a mismatch for almost any guard forced to single-block him. That consistency in winning his individual matchups, along with Johnson’s promising play, has provided Cincinnati with one of the more potent pass rushes in football.

Two of the league’s inevitabilities met Sunday afternoon in Arizona. At some point, Arizona’s offensive tackle situation was going to be a problem. And at some point, Cameron Wake was going to start getting sacks. Unfortunately for Kevin Kolb’s physical well-being, those things coincided in the desert.

After going sackless in Miami’s first three games (again, the silliness of sack totals. Wake had more than a dozen pass disruptions and hurries), Wake piled up four and a half against Arizona while beating up on rookie offensive tackle Bobby Massie. 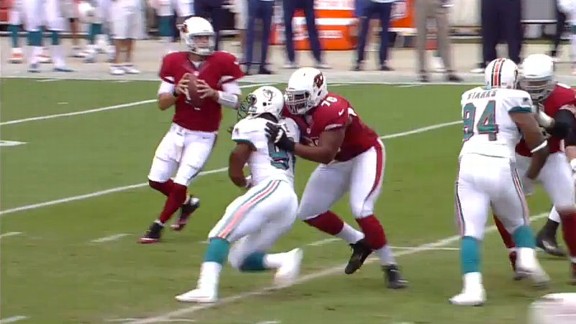 The game-long abuse started early. Wake’s first sack came on a third down on Arizona’s first drive, just as the Cardinals were moving into field goal range. The beauty of Wake’s pass rushing is in its simplicity. His tactics on Sunday were straight from any coaching clinic. As he comes around the edge here, Wake dips his inside shoulder while he turns and gives Massie as little of his body as possible. Massie and his massive hands have almost no surface area to latch onto. That problem is compounded by Wake’s pad level. By dipping his shoulder and lifting his right arm underneath Massie’s pads, he has leverage almost from the point of contact. At this point, Wake has already won. 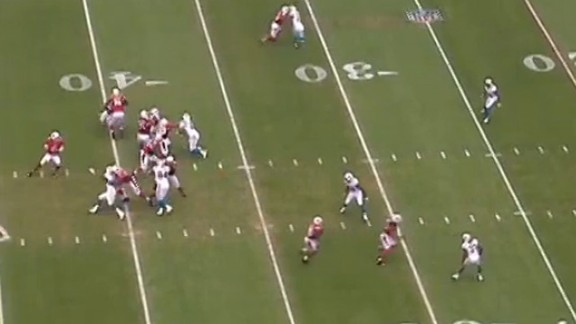 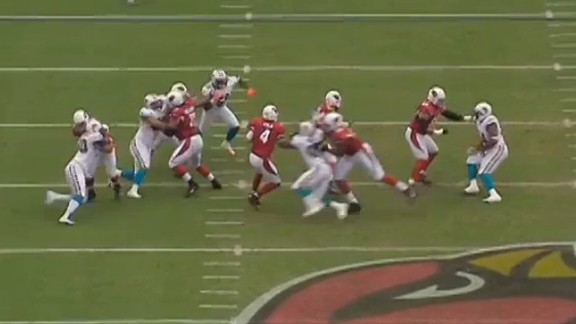 The fundamentals porn continues as Wake finishes the play. As Wake gets to Massie’s edge, the quarterback’s natural reaction is to step up in the pocket. Wake’s response, as he’s been taught, is to bend his path toward the quarterback by turning his inside shoulder back upfield (first photo). By the time he’s wrapping up Kolb, Wake is actually moving back up the field. This turn, done in such a small area and as a 320-pound man hangs on him, is a pretty remarkable exercise in leverage and body control. The whole play — which is essentially the same method Wake used to collect his next three and a half sacks — is indicative of why Wake has been so dominant since coming back into the league. There are few wasted movements as he comes off the edge, and the action he does take is almost always compact. There’s nothing new about it; the difference is in how much better he is at it than nearly everyone else.