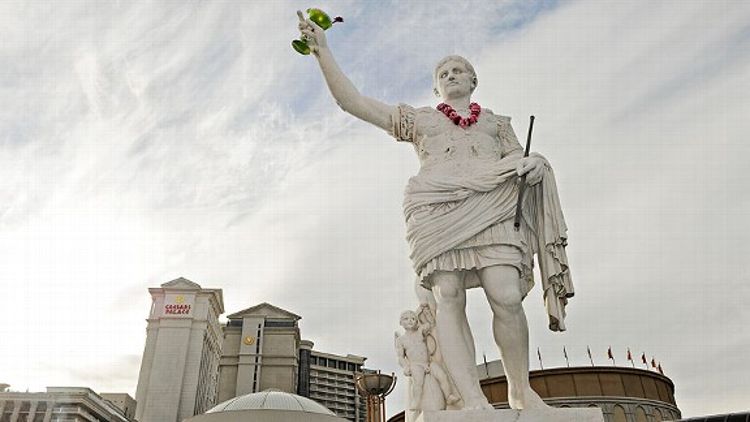 Here in Viva Las Vegas headquarters at the Veer Towers, we get one question about twice as much as every other question combined.

“I’m coming to Vegas soon. Which sportsbook should me and my friends go to?”

It’s time to start answering that question. Starting this week, we’ll be providing capsules and reviews of the sportsbooks that line the Las Vegas strip. If you’re just looking to place a bet somewhere when you’re in Vegas, of course, this won’t really matter. You can do that at any sportsbook. But if you’re looking to figure out where you and your buddies should spend a Saturday or Sunday watching football, watch this space over the next couple of months.

We’re going to start with one of the oldest, most respected sportsbooks on the Strip: Caesars Palace. If you have a vision in your head of what a Vegas sportsbook would look like, chances are that you’re picturing the Caesars book. It’s a cavernous, extremely dark space out on the casino floor. Other books are in their own enclosed areas of the casino (Hard Rock) or even inside a restaurant (Palazzo), which detracts from the experience. This is a massive space carved out for sports bedlam, and when there’s a big game going on, you’ll hear the shouting from the sportsbook throughout most of the casino. It might have the best energy of any sportsbook in Vegas.

Continuing with the old Vegas vibe is one downside: Smoking. The image of smoke-choked rooms also extends here. While the huge ceiling and open space the sportsbook is allotted helps limit the amount of smoke that sticks around, this book is right next to the poker room and the Pure nightclub, both of which are smoke-free, as well as a set of bathrooms. It’s a natural choke point for anyone who wants to smoke. The good news is that the nightclub doesn’t open until 10 p.m..

While most sportsbooks offer the same varieties and flavors of bets, Caesars has a new bet type that’s exclusive to its book: The rivalry bet. The idea is to provide action between two teams who aren’t facing each other to create a different sort of betting opportunity. Last week, for example, you could have bet on either side of a matchup between Kansas State University and the Kansas City Chiefs. The Wildcats were 2.5-point favorites with a moneyline of -115 and a point total of 42.5. Since the Wildcats scored 17 points and the Chiefs put up 23 on Monday night, the Chiefs would covered the rivalry bet, and the under (40 points) would have come in for the point total. The 15-cent line means that these aren’t particularly profitable bets, but if you’re really looking for something you can’t bet on anywhere else in Vegas, the rivalry bet is absolutely that.

Of course, there are a few questions that we were told by our Twitter followers (@billbarnwell) to ask about every sportsbook. We’ll get to those now.

Of the questions we received regarding sportsbooks, about half of them boiled down to something about procuring free alcohol. In general, casinos are very happy to pass along free drinks to gamblers, but they’re also smart enough to realize that people in the sportsbook aren’t constantly spending money the way that somebody at a slot machine or a blackjack table would be. So drink service has changed dramatically in books over the past decade or so.

Nowadays, the currency of choice in most sportsbooks is the drink ticket, which is handed to a cocktail waitress who will (in most books) only serve people with said drink tickets. And as you might suspect, you get drink tickets by betting. At Caesars Palace, you’ll receive a drink ticket for a $5 bet on horse racing or a $50 bet on sports betting. That’s actually a relatively cheap rate; I was told by one book this week that I’d have to spend $300 on sports betting to get a drink ticket. That’s a really expensive Jack and Coke. The reason why there’s a distinction between horse bettors and sports bettors, meanwhile, is because the casino makes less off the latter. Caesars Senior Sportsbook Analyst Todd Fuhrman noted to me that the average “hold” money kept from each bet for the company on a sports bet was about five percent, but the average hold on a horse racing bet was closer to 19 percent.

The company does limit the number of drink tickets; you can’t, for example, bet $100 on horses and expect to get 20 drink tickets back. But if you’re really desperate to get drinks while you’re at the Caesars book, placing a few small horse bets isn’t the worst idea. Failing that, the nearby bar will sell you a 12-ounce light beer for $6, or you can choose to sit at the penny slots and watch the big screens from there. Cocktail waitress service isn’t legendarily quick for penny slot players, but you’ll get drinks for free if you sit there and churn away long enough.

If you’re going to sit through seven hours of football on a Saturday or Sunday, chances are that you’ll want a comfortable seat or four. Even in a large sportsbook like Caesars, that can get very tricky. 35-40 percent of the book’s total action comes in on the NFL, so as you might expect, there are plenty of people who also want those seats.

The book “opens” at 7 a.m. on Saturdays and Sundays and stays open until 1 a.m.. It’s open from 8 a.m. through 10 p.m. otherwise. There’s nothing stopping you from sitting down in one of the book’s chairs before then, but there won’t be anyone to take your bets or change the televisions on the big screens before then. To ensure that you’ll have a few seats for a Saturday or Sunday of football action, Fuhrman suggests that you arrive to the book no later than the 7 a.m. opening time, if not earlier. Members of the Total Rewards club run by Harrah’s, the parent company that owns Caesars, can try to arrange a reservation for a seat through the club. There are also VIP tables available; as you might suspect, they require a hefty chunk of change if you’re planning on sitting down at them. A VIP table for four during NFL season would require about $15,000 in bets.

If you can’t get a seat on Saturday or Sunday, you have other options. There’s plenty of space to stand behind the seats. The crowd for games on other nights isn’t quite as bad, so you might want to try and show up for a Thursday night college game or Monday Night Football if you want to try and procure a seat without waiting hours in advance.

If you do beat Fuhrman and his minions, you can cash your tickets at the sportsbook windows during business hours. If you’re not able to get to the window then, you can take your ticket to the casino cage or, if you’re not in town, mail the ticket to Caesars using the instructions on the back of the ticket and receive a check in the mail. Fuhrman notes that the ticket should be sent registered mail and with a SASE. This is available for just about every sportsbook in town, but the rules are different depending on the book; some insist on having the ticket paid within 60 days, while others give you a year to send your winners in. Caesars voids any tickets after 120 days.

Lines for the following week’s NFL games are posted on Monday mornings between 10 a.m. and noon. This is several days after the Hilton posts their lines, so while you can still try and beat the market to some of the juicier opportunities by betting here first thing Monday, it’s not quite as lucrative as the possibilities available at the Hilton.

In subsequent weeks, we’ll travel to other sportsbooks around town and give you the details on what makes them stand out from the pack. If you have any questions that you think should included, of course, shoot us an e-mail at barnwellvegas@gmail.com.

You may have heard Al Michaels mention on Sunday night that the Eagles are 13-0 under Andy Reid in the games immediately following their bye week. Teams coming off of a bye went 5-1 last week, with the only loss coming from the Patriots. The other five teams won their games by an average of nearly 16 points, and four of those five teams covered the spread handily. This seems like it could be useful information for bettors.

The bye week phenomenon isn’t complicated. A team coming off of a bye is going to be fresher than its opposition, and it’s likely to have had an extra day or two of preparation. On the other hand, it’s also nothing new. Bettors and oddsmakers already know about it and use it as part of the handicapping process.

Are they doing so in an accurate manner, though? Again, we turn to the data gathered by the Spreadapedia project for answers. If the bye week really does have an effect on teams winning, they should win more frequently than teams who aren’t on the bye. But if the market is properly correcting for the bye, well, teams coming off of a bye should still have an against-the-spread (ATS) record of about .500.

So if you’re looking to use the bye week effect as an excuse to lay money down on a team, it’s probably best that the team in question be on the road.

It feels good to beat the market to a line movement! I was able to buy both these games last Wednesday, when the home teams were six-point favorites. I didn’t know that the Eagles would win by 27 and that the Broncos would lose by 35, of course, but I suspected that each of the lines would move in the direction of the home teams as we got closer to Week 9. Now, I have the option of middling both these games at -8 (or higher, since the offshore sportsbooks have these game as high as -9 and the Vegas books are likely to follow) and winning both my bets if either team wins by a touchdown.

If you had to pick one of these two to bet on, I would imagine that Oakland -8 is the better play. We saw how badly Tim Tebow struggled with the pass rush last week, and the Raiders have one of the best pass rushes in football, even without injured defensive end Matt Shaughnessy.

Of course, this combination makes for an excellent teaser play. A six-point teaser with the two home teams crosses the key numbers of three and seven and turns those eight-point lines into two-pointers. And if you need a third game …

Tom Brady has been at the helm for 32 losses since he took over as the Patriots starting quarterback in 2001. In the games that followed those 32 losses, the Patriots are 22-10 against the spread and 26-6 straight up. Of course, you also might remember what happened the last time the Giants lined up against Brady. Having to beat the Giants by nine could be a problem, but this is another great teaser opportunity.

Previously from Bill Barnwell:
Breaking Down the Suck for Luck Campaign
Handicapping the 2011 NFL MVP Race
The Hedge, the Tease, and the Life of the NFL Bettor
Debunking the Tim Tebow Myth
Could Alex Smith Become the Worst Quarterback to Ever Win a Super Bowl
The Cost of Carson and the Rest of the NFL Trading Deadline Deals