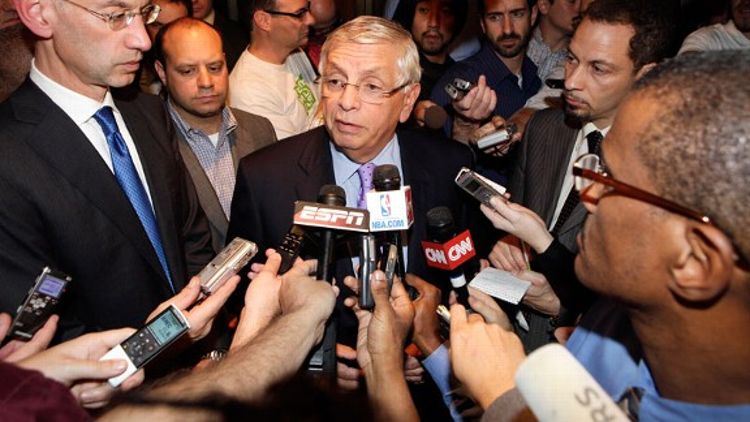 Tyler Cowen and Kevin Grier are both economists. They are also both basketball fans. Here’s their take on the NBA lockout.

The Golden Rule: He who has the gold, rules
Fundamental Rule of Negotiation: He who cares the least wins

In the NBA, it’s the owners who have the gold and care the least.

What do the owners have to lose?
Net revenues from the lost games and any decline in the value of their franchises due to fan alienation and depreciation of assets — namely the players they have under contract.

What do players have to lose?
Salaries from lost games and time cut off from already short career windows.

Why do owners have leverage?
They have deeper pockets and alternative sources of income. The next most lucrative financial option for players is far worse than the owners’ lowest offer.

Why are labor disputes in sports so weird?
The bosses control the whole sector and face little competition when it comes to hiring labor. Since the merger with the ABA in 1976, the NBA is a monopoly and operates in a manner (it monopolizes!) that would be illegal outside the sports world. Unlike in Silicon Valley, there are no NBA “start-ups.” You cannot create a new NBA team without permission of the incumbent owners. The league also has to approve changes in teams’ location and ownership.

The star players are the only counterweight to management’s power. To a large extent, they ARE the NBA’s product. Because of this, the owners aren’t talking about using replacement players, and some stars are getting decent offers to play overseas during the lockout. These factors are a cause for concern for the owners and put limits on how much they can extract from the players.

Why have past CBAs been so favorable to the players?
In the past, traditional NBA owners were in the game for the fun, the control, and the bragging rights. They made money through franchise appreciation; there was less emphasis on maximizing short-run operating profits. The newer group of owners bought high, are more corporate in orientation, and the financial crisis renewed their sense of vulnerability. They’ve poured a lot of money into those teams and they aren’t comfortable with seeing red on their balance sheets year after year.

Why don’t the players settle?
Perhaps because they have done so well in the past, it’s hard for the players to accept that the owners are dead set on hammering them this time. They feel, correctly, that they have been making all the concessions. Imagine trying to redo your “chores deal” with your spouse, with one side giving in on every negotiating point. As human beings, we are programmed to reject one-sided deals, even when surrender might be the rational choice.

How far apart are the two sides?
The split on BRI (Basketball Related Income) is supposedly the biggest point of contention. Players want 52.5 percent (down from 57 in the previous contract). Owners are “adamant” on 50 percent and started with an initial lowball offer of 37.

Is it economically worthwhile for the players to hold out for $500 million?
No. Total NBA salaries last year were over $1.5 billion, about three times the amount they are fighting over. Canceling a third of the current season would wipe out the gain of winning the extra 2.5 percent of BRI over the life of the new collective bargaining agreement. Canceling the whole season over 2.5 percent of BRI is insane for the players.

Of course there are other issues relating to the salary cap, like the length of contracts, but the BRI split seems to be the sticking point.

What’s the bottom line?
Can the owners afford to give the players a better deal? Yes.

Forbes magazine estimates that the Knicks franchise, the NBA’s most profitable, is worth about $655 million. The Milwaukee Bucks, the least profitable franchise according to Forbes, still is worth $258 million, and the Clippers, often considered the worst-run team, have a net value of $305 million. The value of the Knicks alone could more than cover what the players are asking for.

Can the players stop the owners from getting a deal that is much worse for them than the previous Collective Bargaining Agreement? No. What the players are willing to agree to is already materially worse than before. The only question that remains is how bad it will get.

Does the players’ line in the sand over 2.5 percent of BRI make economic sense? No, not if they miss many games to achieve it.

Is the owners’ offer fair? Not really.

Should the players take it? Yes.

Will the owners give in and up the ante? Very unlikely.

Will the players be rational and take what is on the plate? We can only hope so.