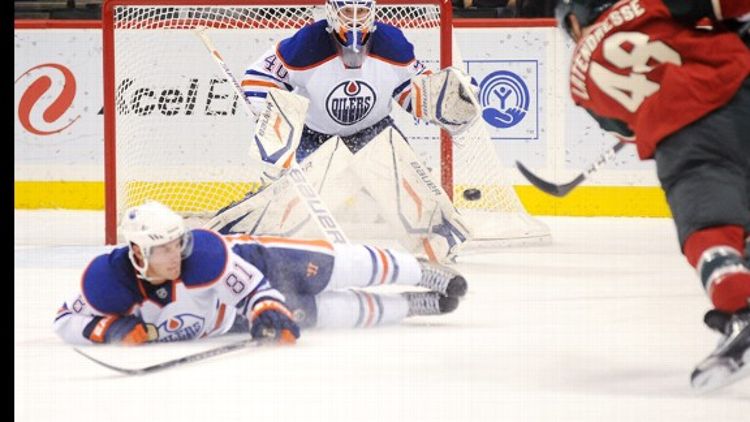 All the NHL’s attention lately has been focused on its players’ heads. The league voted this summer to broaden the scope of several rules addressing the kind of contact that can cause concussions — those hits that land up high or from behind — and it has even gone so far as to actually enforce them. New VP of player safety Brendan Shanahan has doled out 60 pre- and regular-season games’ worth of suspensions, most of them for head shots, in this year’s preseason alone.

It’s safe to say that no small factor in this crackdown was Sidney Crosby, the league’s most talented and marketable player, who has been sidelined since January with a concussion. (This weekend he announced that while he continues to progress, he will not be suiting up for Pittsburgh’s season opener Thursday night.)

And yet over the weekend, a loud and impassioned debate was revived within and around the NHL community about a rule that many deem to be the most dangerous in all of hockey. As usual, it took a sickening injury to get everyone talking, but this time it wasn’t a superstar’s rattled head that did it — it was a relative unknown’s shattered leg.

Taylor Fedun, 23 years old, graduated from Princeton — where he was captain of the hockey team — in June with a degree in mechanical and aerospace engineering. He signed a two-year free-agent contract with the Edmonton Oilers, and his play in training camp was at once impressive and unassuming. As Fedun survived several rounds of roster cuts, word began to spread that this kid might actually make the squad as a defenseman — yet at the same time his own teammates hadn’t yet learned basic things about him, like how the Oilers happened to be his hometown team.

“Fedun’s from Edmonton? Hmmm, didn’t know that,” the Oilers’ Ryan Whitney told the Edmonton Journal’s Jim Matheson. “I did know he built a hovercraft at school.” (It was his senior project.)

Two days later, during a Friday-night game between the Oilers and the Minnesota Wild, Fedun was skating at full speed toward his own defensive goal line toward a puck that had been sent up the full length of the ice by a Wild player, a situation known as icing. If Fedun so much as tapped the puck while behind the goal line, the whistle would blow, the play would die, and the puck would be brought all the way back into the Wild’s defensive zone by a linesman for a faceoff. But it wouldn’t be that easy, because Fedun had the Minnesota Wild’s Eric Nystrom on his heels.

Nystrom, too, had reason to be racing. Drafted 10th overall by the Calgary Flames in 2002, the forward — whose father, Bob, scored an overtime goal to win the 1980 Stanley Cup for the New York Islanders — never climbed too high on the Flames’ depth chart. “He fills a role,” Flames GM Darryl Sutter said last June when asked whether he’d be giving Nystrom the raise he was seeking. “I like Eric Nystrom, but fourth-line players on the first of August are $600,000 players.” Nystrom signed a three-year deal with the Minnesota Wild a few weeks later, to give the team some needed “grit.”

One thing that earns a forward that sort of “gritty,” “grinder” reputation, particularly in preseason, is to make that extra effort to outskate defensemen on an icing play and get the call negated. The NHL uses “touch-up icing,” meaning that if an offensive player like Nystrom can touch the puck before a defensive one like Fedun, the whistle will be pocketed, the icing call will be waived, and who knows — maybe he can take advantage of the momentary chaos to set up a trailing teammate for a goal (or even knock one in himself.)

As the two players sped past the goal line, Nystrom made a last-ditch reach for the puck, but his stick got caught up in the space between the bottom of Fedun’s skate and the top of its blade. Fedun lost his balance and slid feet first — and fast — into the boards just feet away. Nystrom instinctively held up both hands as if to say “I’m innocent!” Edmonton’s Theo Peckham began to charge at Nystrom, agitating for a fight, until he heard his teammate screaming in pain. So Peckham instead began to agitate for someone to bring a stretcher, fast.

Three years ago, former Wild defenseman Kurtis Foster had a nearly identical injury to Fedun’s: a broken femur, or thigh bone, on the same kind of play. As broken bones go, a femur ranks right up there with the very worst: Not only is it the body’s largest, longest, strongest, and most-weight-bearing bone, it’s also located directly adjacent to the major femoral artery and can cause life-threatening bleeding. Femurs don’t break easily; it usually takes a car accident, or a fall from a significant height.

That’s the same thing doctors said to the Washington Capitals’ Pat Peake in 1996: that the severity of the injury he had was like they’d seen “only in construction workers who had fallen from high rises,” according to the Globe and Mail’s James Mirtle. (Toronto Maple Leafs coach Ron Wilson called these sorts of collisions “car wrecks.”) Peake’s injury was a little different than Fedun’s and Foster’s — it wasn’t his femur that was shattered in 12 different places, it was his heel — but the genesis was the same: a race for the puck behind the goal line; two players moving at warp speed directly toward what might as well be a brick wall.

Peake had been the Caps’ first-round pick in 1991; in 1993 he was named the Canadian Hockey League’s Player of the Year. In 1996, when he crashed into the boards, he was 23 years old, the same as Fedun. At age 25, after undergoing double-digit surgeries and trying in vain to make a comeback, he retired.

“I guess everything happens for a reason, and you’ve got to move on,” Peake said in an alumni Q&A for the Washington Capitals. “I guess the good thing is it could have been the other end, with my head. I wouldn’t have been able to know my kids or recognize my wife.”

In 1990, a Czech player named Ludek Cajka of the Czech Elite League had that very kind of head-first collision on a touch-up icing play and was left in a coma with severe spinal injuries. He died several weeks later, ultimately leading the IIHF, the governing body of hockey in Europe, to institute “no-touch” icing, in which there’s no need for a race: The whistle is blown the instant the puck crosses the goal line, and that’s that.

These days just about every hockey league uses no-touch icing or a hybrid rule: the European leagues, the North American colleges, the Canadian major juniors, and even the ECHL, which is the NHL’s equivalent of Double-A baseball. Only the NHL (and its sidekick, the AHL) have stood by the touch-up rule. This much to the dismay of even staunch hockey purists such as Hockey Night in Canada’s Don Cherry, the colorful and loudmouthed host who has been raging against the NHL’s icing rules ever since Peake, had to end his promising young career.

“It’s been at least 12 years I’ve been going nuts on it,” Cherry told the Edmonton Sun’s Terry Jones. “I had to stop showing all the examples of it. I was making kids sick.”

Proponents of touch-up icing say that it’s the kind of rule that makes the NHL the greatest hockey league in the world: It encourages speed, unpredictability, toughness and, yes, grit. They point to the occasional times that an offensive player manages to wrestle control of the puck and score a goal — is there anything better, they ask? They say that these injuries, to players like Foster, who missed more than a season of NHL play and now has a steel rod in his leg, or Peake, who has undergone nearly 20 surgeries and feels “trapped in a 93-year-old body,” and also to others such as Al MacInnis, Mark Tinordi, and Marco Sturm are rarities, no more common than any other hockey injury. And after all, they argue, hockey is an inherently dangerous sport. Clint Malarchuk got sliced in the jugular with a skate blade. Chris Pronger got hit in the heart with a puck. Keep changing the rules, they sniff, and it’s no longer real hockey.

But if the league wants to keep players safe, as it swears that it does, there’s no rule that seems more tailor-made to hurt them than the icing rule. The injuries may not come often, but when they do they come catastrophic and hard. For years, the league did little about hits to the head until one of its most cherished players got one too many. Is that what it will take to change the rules this time?

After Foster’s broken femur, the league added language to the rule book banning contact between players unless it’s for the express purpose of going for the puck. But that’s all Nystrom was doing —“just wanted to show a new coach my work ethic by beating out an icing,” he tweeted — and that’s why Nystrom now feels so bad for Taylor Fedun that he “could puke.”

There is “no appetite for automatic icing,” said Toronto general manager Brian Burke at the NHL’s 2010 Research, Development and Orientation Camp, where the league experiments every summer with potential rule changes, using rookies as guinea pigs. “The race for a loose puck is an exciting play for our fans, and we have to keep that play in, but we have to figure out a way to eliminate the injuries to the defensemen.”

Burke advocated a hybrid icing rule, in which the officials would have discretion to blow a play dead if, as an example, the defenseman and forward were dangerously neck-and-neck as they neared the goal line. (The NCAA and USHL have this kind of rule.) No one bit.

And so, at the 2011 RDO Camp, the icing proposals were again back on the agenda. “I am not for no-touch icing whatsoever,” said Phoenix Coyotes GM Don Maloney. “It’s a speed game, and you’re supposed to play to the whistle. I just don’t like it. It just aesthetically looks poor.”

“The National Hockey League has an intense game that pushes speed,” added another GM, “and you want to reward the team that is aggressively trying to get the puck back.”

That GM was Edmonton’s Steve Tambellini, who now has seen one of his own players, Fedun, lose his potential rookie season, for a team he grew up in Edmonton idolizing, all for a silly play between two earnest strivers in a meaningless game. Let’s hope that’s all that he loses.

“I think at this level, quick, smart plays are really important,” Fedun told the Oilers website just two days before breaking his femur. “That’s something that I’m going to do: get to pucks fast, make smart outlet passes, be a puck-mover and jump in on the power-play; get an opportunity there and make some things happen. That’s the way to get noticed.”

Managing The Managers In The MLB Playoffs