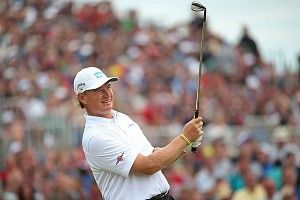 It was so, so tempting to churn out this recap of the Open Championship prematurely, on Saturday night, leaving blank spaces where necessary to plug in Adam Scott’s winning score for his first major victory, the one everyone had been expecting from him since he was about 19 years old. Why sit around and wait for final-round drama to not materialize, once again?

In the past two years, Sunday finales on the old sod had crescendoed not into gripping finishes so much as yawning culminations of a midsummer lawn party, with the unchallenged leader strolling casually to the 18th green for a polite toast and gentle tonguing of the ancient “jug.”

Adam Scott had a four-shot lead going into Sunday’s final round. He did not bear the disposition of a man willing to refuse Royal Lytham & St. Anne’s his offering of fairways and greens in regulation, either. And if Scott wasn’t even going to be paired with Tiger Woods, the man who signed caddie Steve Williams’s checks for 13 years, well, why not just sleep in and rejoin the sunning patrons, in spirit, for a post-game ale on the patio later on. It was over.

For the wind to show on Sunday, even, seemed like a cynical prank engineered by tournament organizers at the Royal & Ancient to trick us into tuning in. Because it mostly served to throw Scott’s chasers further from the mark.

The consolation match of speed-golf that Brandt Snedeker and Graeme McDowell had committed themselves to never got going on account of their shots being constantly whipped into 900-foot-tall prairie grass or the kooky phone-booth-sized mud pits that serve as the basis for what we now call “bunkers.”

Tiger Woods’s much-admired Disciplined Safe Strategy didn’t work, either, when his many irons off the tee into 15-mile-per-hour headwinds either left him with 240-yard shots into the green or no shots into the green whatsoever, were they to fade gently into the awful death grass right. He also could not putt or hit wedges or avoid final-round triple-bogeys either, so, yeah.

Oh, and then there was Ernie Els, but he’s old and doesn’t win golf tournaments anymore.

Didn’t you, reader, just feel like turning off your television after Adam Scott’s birdie on the 14th sent him back into double figures under par, so as to get on with the pressing business of Sunday afternoon? Because we’d been tricked into sticking around before.

Last year we watched Phil Mickelson briefly threaten to take victory from Darren Clarke, before the iron law that “Phil Mickelson does not win British Opens” reasserted itself. And in 2010, dear God… let’s just say it was quite rude of the R&A to cancel the final round of a St. Andrew’s British Open and instead show a practice round of South Africa’s hottest new swing, Louis Oosthuizen.

So enjoy your well-deserved trophy, Adam Scott, but the rest of us ordered these tickets to see the Batman weeks ago and didn’t want to show up late and crane our necks from the worst seats.

But then, after 68 holes, Scott made consecutive bogeys on the 69th and 70th, leaving him with a modest two-shot lead over stubborn Ernie Els. No one on the course seemed to make just one bogey at a time — they’d be going along fine, safe par after safe par, and then it was, oops wind tall grass bunker unraveling collapse no confidence yikes three bogeys in a row! — but Scott’s bogeys seemed like bad luck. A so-so chip here, a lip-out there. The things that you laugh off with Stevie Williams on the jet back home, while you’re chugging Champagne out of silver.

And so Els made a birdie on the last. That was … nice? A nice moment for the old guy, and that’s about it. It wouldn’t matter, with Adam Scott dead in the middle of the fairway on 17. Unless he hit his approach into a greenside hole covered by an actual entire forest and made bogey.

And then hit his drive on 18 into a well-placed mud pit, needing to chip out sideways.

And then missed his 8-footer for par with a dinky too-cute pull of the blade, and … lost to Ernie Els, who was eating a sandwich on the putting green.

Jim Newell (@jim_newell) is a contributor for Wonkette, Salon and the Guardian.