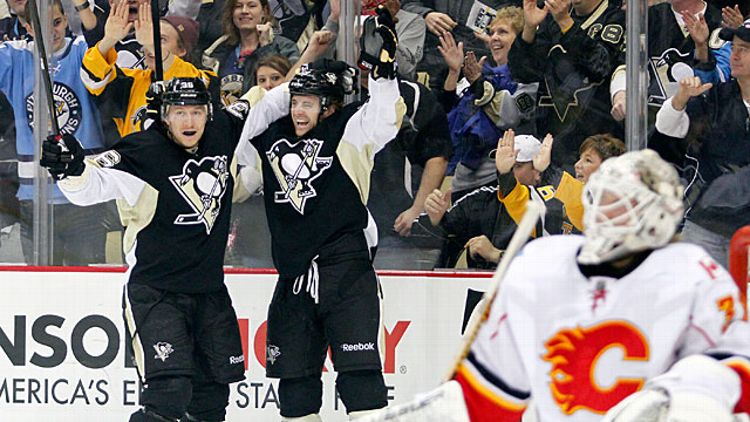 The Pittsburgh Penguins won their seventh straight, earning a 4-3 victory over the Calgary Flames on Saturday afternoon, thanks to a goal and two assists from Sidney Crosby. That gave Crosby 54 points on the year, good for a six-point gap over Chicago’s Patrick Kane for the league lead. It was a good weekend for the Pens captain, who also moved into the top spot in the 24/7 MVP power rankings.

Crosby’s not the only Penguin enjoying a great season. Evgeni Malkin was scoring at close to a 100-point pace before being sidelined by a leg injury that’s kept him out for four games. Chris Kunitz continues to excel on Crosby’s wing, rekindling the debate around his Olympic chances. And James Neal, when he’s healthy and not suspended, has been a force.

And then there’s goalie Marc-Andre Fleury. The Penguins starter has been excellent, putting up a 21-8-1 record to go with a 2.04 GAA and .923 save percentage. The latter two numbers would represent career bests over a full season, and in theory we should be talking about Fleury as one of the league’s best goalies so far. We’re not, of course, because it doesn’t really matter what Fleury does in the regular season anymore. He’s spent the last two years developing a reputation for playoff meltdowns, and isn’t likely to get much credit for gaudy numbers until he can post them in May and June.

The good news is that he’ll almost certainly get that chance, because the Penguins are going to roll into the playoffs. Pittsburgh has won 12 of its last 13 and 10 straight at home, and have moved to within two points of the Ducks for first place overall. They’ve also opened up a 13-point lead in the Metropolitan Division, a bigger gap than those enjoyed by the other three division leaders combined.

The Pens play their next four on the road, but the schedule isn’t especially daunting. Their next six all come against teams that are currently .500 or worse, including tonight’s matchup with the struggling Senators.

The Penguins have built up such a lead in the Metro that it’s easy to forget that they briefly surrendered the top spot in the division just over a month ago. On November 17, the Washington Capitals beat the Blues to move into sole possession of first place, one point ahead of Pittsburgh.

The Penguins regained the lead the next night while the Capitals went on to lose their next four, and the division hasn’t been close since. But while Pittsburgh’s been red-hot, the Capitals have quietly built a solid stretch of their own. They’ve earned points in nine of their last 11 games, including taking three of four from a pair of weekend games.

On Friday night, Washington went into Carolina and picked up a 4-2 win. Washington was largely outplayed at even strength, but a power play that’s posted more goals than any other unit in the league clicked for three more to make the difference. Rookie Philipp Grubauer made 39 saves to move to 4-0-1 on the season.

The Capitals looked like they were headed to another win on Saturday, building a 4-2 lead over the Devils midway through the third. But a pair of New Jersey goals tied the contest, and Andy Greene scored the winner 43 seconds into overtime. The win moved the Devils into third place in the Metro, five points back of the Caps.

The big story in Washington, as always, has been Alexander Ovechkin. He scored in each of the weekend games, giving him 30 on the year. That’s good for the lead league by a healthy margin. It’s also the second straight season that he’s been the first player in the league to reach the 30-goal mark, the first time that’s happened in 16 years. Adjusting for era, he’s on pace for one of the greatest goal-scoring seasons the NHL has ever seen.

But Ovechkin isn’t the Capitals’ only offensive force. Nicklas Backstrom is on pace for a 90-point season, and Maple Leafs castoff Mikhail Grabovski is headed for a career year. Grabovski is also a plus-6, and while that stat is generally useless, it’s worth pointing out after his minus-10 last year was used by some in Toronto to justify the decision to buy him out in July.

The Capitals head into the Christmas break with a tough matchup, as they host the Ducks tonight. But they’ll get a good chance to rack up some points when play resumes, playing four straight against Eastern teams that are currently on the outside of the playoff picture. It’s hard to see them challenging the Penguins for top spot again anytime soon, but they should at least be able to cement their playoff status.

The Panthers dropped a 5-2 decision to the Jets on Friday night. For most of the season, that would be considered just another Florida loss, barely worth mentioning. But the Panthers went into the weekend as one of the league’s hottest teams, having won five straight.

The Panthers were sitting at a pathetic 3-9-4 when they relieved coach Kevin Dineen of his duties on November 8. The change didn’t help much early on, as they lost their first two under interim coach Peter Horachek, but since then they’ve gone 11-7-1. That’s a nearly 100-point pace over a full season, and it’s pushed the team back into the fringes of playoff contention.

So what’s changed? As with most NHL turnarounds, goaltending has been a major factor, as the Panthers didn’t allow more than two goals in any game during their win streak. That’s the sort of result the Florida front office had been expecting when it headed into the season hoping to get solid goaltending from its duo of veteran Tim Thomas and youngster Jacob Markstrom.

But with Markstrom struggling and Thomas unable to stay healthy, journeyman backup Scott Clemmensen has emerged as the difference-maker. He’s been in goal for the team’s four most recent wins (Markstrom got the start and took the loss against the Jets), and has played well in each — he’s had a .920 save percentage or better in all four games.

Clemmensen’s run is a nice mini-redemption story, though history says it’s unlikely to last. If the veteran does come back to earth, the Panthers will have to find a way to jump-start an offense that tends to struggle to create goals. The Panthers score fewer goals per game than any team other than the Sabres and Wild. The team’s leading scorer, veteran Tomas Fleischmann, has yet to crack the 20-point mark, and Brad Boyes leads the team with just nine goals. The Panthers do have their share of young offensive talent — Jonathan Huberdeau won the Calder last year, and rookie Aleksander Barkov has shown flashes — but they desperately need somebody to step up and start scoring now.

Despite their hot streak, Florida is still seven points back of the Maple Leafs for the last wild-card spot, so a playoff push is unlikely. But “unlikely” is a nice step up from “impossible,” which is where the season seemed headed just a few weeks ago.

• The Ducks continued to roll, scoring four unanswered third-period goals to earn a 5-3 win against the hapless Islanders. That gave Anaheim eight straight wins and moved it into a three-point lead over the Kings on top of the Pacific.

• At the other end of the Pacific, the Oilers’ nightmare season drags on. They’ve lost six straight, most recently a 6-0 embarrassment at home against the Blues. The Oilers are now just four points clear of the Sabres for last place overall, and Buffalo has two games in hand.

• The win in Edmonton cost the Blues the services of Alexander Steen, who sustained an upper-body injury and isn’t expected to play against Calgary tonight.

• Two more injured stars from Saturday’s action: Dallas blueliner Sergei Gonchar, who took a puck in the face during a 3-2 loss to the Sharks; and Blue Jackets forward Marian Gaborik, who broke a collarbone during a 6-3 win over the Flyers. Gaborik was returning to the lineup for the first time after missing 17 games with a knee injury.

• On Sunday night, it was Roberto Luongo’s turn to join the injury parade. He left the Canucks game against the Jets in the first period and did not return. There’s no word yet on his status. The Canucks won 2-1.

• Martin Jones remains unbeatable. The Kings’ rookie goaltender earned a 3-2 shootout win over the Avalanche to move to 8-0-0 in the first eight games of his NHL career. That matches a record set by Philadelphia’s Bob Froese in 1982-83.

• The Leafs and Wings played a Winter Classic preview in Toronto on Saturday, and we can only hope the outdoor version is nearly as entertaining. Detroit ended up escaping with a 5-4 shootout win in a wild game that featured a save of the year candidate.

• Despite the continued absence of Steven Stamkos, Tampa Bay keeps finding a way to win. Its 3-2 OT win over the Hurricanes was the team’s fourth straight, keeping it locked in a tie with the Canadiens for second place in the Atlantic, just three points back of the Bruins for top spot.

• Finally, a reminder that this is a short week for the NHL, as the league gets a three-day break for the holidays. Tonight is the busiest night of the year, with 28 out of 30 teams in action, then no games scheduled for Tuesday, Wednesday, and Thursday.