The Weekend in Hockey: Is It (Finally!) St. Louis’s Year? 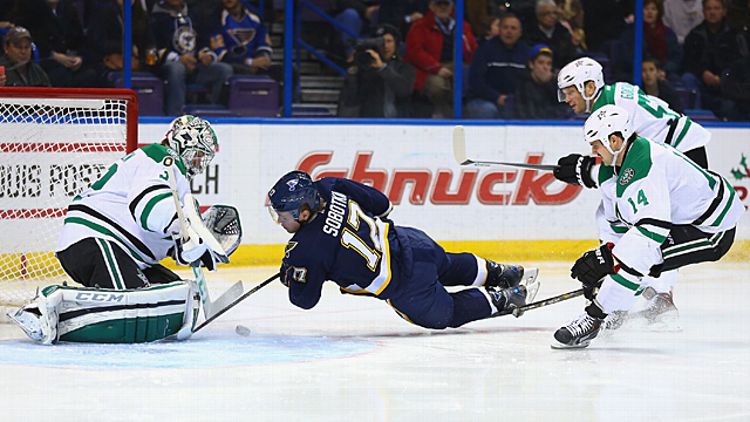 Coming off a 6-1 win against Dallas on Saturday night, the St. Louis Blues have quietly moved to the top of the league in points percentage.

Of course, “quietly” is about what we’ve come to expect from the Blues, who’ve managed to be one of the NHL’s best-run and most consistent teams while never seeming to generate much excitement around the league. We can debate whether that’s due to geography, their recent defense-first mind-set, four decades’ worth of uninspiring playoff runs, or some combination of the above. But the Blues have become an easy team to forget about despite being one of the West’s best over the past three years.

Maybe this is the year that changes, with St. Louis looking like they’re well equipped to emerge from the Western Conference dogfight. They’re a team without an obvious weakness, featuring their usual tight defense combined with a surprisingly productive offense that ranks second in goals per game. That offense has been spearheaded by Alex Steen’s remarkable season, but has also featured a strong year from David Backes and three different defensemen who rank in the league’s top 10 for scoring.

If there has been an area of concern, it’s been in net, where Jaroslav Halak’s numbers have been merely decent. His .906 save percentage is well off his career average, though it’s an improvement over the disappointing .899 he managed last year in limited action. That’s a concern for a team that was hoping its starter would rebound to closer to the .926 mark he put up in 2011-12.

In last week’s first-quarter review, I predicted St. Louis would be the eventual destination for Sabres goalie Ryan Miller. A few Blues fans questioned that, pointing out that Miller wouldn’t necessarily be a major upgrade over Halak. That may be true, though it’s tough to compare their numbers given the radically different teams each is playing behind. If Halak can’t get his game back on track by the new year, I could still see the Blues packaging him with a prospect and a pick to land Miller (with the Sabres then flipping Halak elsewhere for an additional asset), and I’m not the only one.

But that’s speculation for down the road. Right now, the Blues are riding a three-game win streak but facing a brutal stretch of schedule that will see them face the Wild, Avalanche, Sharks, and Kings over the next eight days. It will be a good test for the Blues, who’ll likely need to go through at least a few of those in the playoffs if they view themselves as legitimate Cup contenders.

Phoenix Rising at Home, Coyote Ugly on the Road

There might not be a tougher team in the league to figure out than the Phoenix Coyotes. Despite being just a year removed from a trip to the conference final in 2012, you’d be hard-pressed to find anyone who considered them a legitimate contender heading into this year. And yet they’ve spent most of the season lurking near the top of a very tough Pacific Division.

They’ve done it largely on the strength of a 9-1-2 home record despite playing in front of Glendale’s now-traditional sparse early-season crowds. That one regulation loss came Saturday, when they dropped a 4-2 decision to the Ducks. The Coyotes looked good, outshooting the Ducks 44-26, but Jonas Hiller was able to steal an Anaheim win.

That makes Hiller one of the few goalies who can claim to have shut the Coyotes down. Phoenix ranks fourth in goals per game, led by the ageless Shane Doan and the high-scoring blue line duo of Keith Yandle and Oliver Ekman-Larsson. Mix in a solid season from goaltender Mike Smith (who’s been known to chip in offensively himself) and you’ve got a recipe for a playoff lock.

Or maybe not. The Coyotes will now spend six of their next seven on the road, where they’ve been a barely over .500 team. They’ll need to improve on that quickly, as they’ve dropped all the way to eighth in the West and are just four points up on the Canucks for that last playoff spot.

It’s not panic time yet — the Coyotes still have two games in hand, and three of their upcoming road games are against lowly teams like Nashville, Edmonton, and Calgary — but some mild concern would seem to be in order.

No Jackets Required (In the Playoff Race)

It takes an awful lot of awful to earn the title of “Biggest Disappointment in the Metro Division,” but it may be time to crown the Columbus Blue Jackets. They entered the year with plenty of reasons for optimism: a strong finish to the 2012-13 season, an improving young roster bolstered by some marquee additions, and an apparent superstar in goal.

Nobody was calling them a Cup contender, but there was every reason to expect that they could pull off the deepest postseason run in franchise history. That would have involved winning just one playoff game, but, you know, baby steps.

Instead, even those meager ambitions are fading quickly. They’ve lost five of their last seven to drop into a tie for last place in the Metro, a stretch that includes Friday night’s 6-2 loss to the Canucks. That game saw the Blue Jackets get out to an early 1-0 lead and was tied 1-1 midway through the second before Vancouver pulled away with five unanswered goals in the final 30 minutes.

If there was any consolation from an embarrassing loss, at least it was a slight step up from the season’s low point, a 7-0 implosion against the Oilers on Wednesday. Both games produced ugly stat lines for Sergei Bobrovsky, the reigning Vezina winner who has struggled through a very average season. His .904 save percentage ranks him outside the top 30, and the Blue Jackets are one of just eight teams allowing more than three goals per game.

Bobrovsky hasn’t been the only disappointment. Marian Gaborik has only managed five goals and could now miss a month or more with a knee injury, the team’s young defensemen have been inconsistent, and veteran Jack Johnson has struggled badly. And with Gaborik out and Nathan Horton still weeks away, a team that was already short on star power is basically down to James Wisniewski and a collection of role players.

With division rivals like the Flyers and Devils suddenly surging, the Blue Jackets need to start banking some points quickly if they’re going to stay in playoff contention. They’ll get a good chance to do that this week, with games against the Maple Leafs, Predators, and Oilers.

• The Avalanche earned an impressive 1-0 overtime win in Los Angeles on Saturday. Jamie McGinn got the winner and Semyon Varlamov outdueled Ben Scrivens. Colorado has now won three straight and continues to make those of us predicting the team’s inevitable fall out of the playoff race look bad.

• Stop me if you’ve heard this one: The Maple Leafs were badly outshot but still managed to ride a hot goalie to a win. In this case, the Capitals were the victim, firing 50 shots at James Reimer but falling to a 2-1 Toronto win in the shootout Saturday. Reimer now leads the NHL in save percentage, which isn’t bad for a guy who wasn’t considered good enough to keep his job as the undisputed starter.

• Philadelphia beat the Islanders 5-2 on Saturday to earn its third straight win and move within two points of a playoff spot. It’s been an impressive turnaround for the Flyers, who’ll have a good opportunity to keep rolling tonight against the Panthers.

• That loss to the Flyers was the third straight for the Islanders, who have now settled in with the Blue Jackets in last place in the Metro.

• The Oilers had the weekend off after winning three straight, a streak that included a stretch in which Edmonton scored 14 straight goals. They’re back in action tonight with a tough test against the Blackhawks.

• Yet another team on a three-game win streak: the Montreal Canadiens, who built a 3-0 lead against the Penguins on Saturday and then held on for a 3-2 win. The Canadiens are now within a point of the Lightning and Leafs for second place in the Atlantic.

• As for those Penguins, they briefly surrendered the top spot in the Metro to the Capitals earlier in the week but have now rebuilt a four-point lead. Tonight, they make their first trip to Boston since last year’s conference finals debacle.

• The Senators continue to wobble along, not quite a good team but not quite a bad one. They beat the Red Wings on Saturday but lost to Carolina on Sunday, and remain below .500 on the year. More surprisingly, they’ve given up more goals than anyone other than the Panthers, Islanders, Sabres, Oilers, and Flames. That’s not the sort of company a team wants to be in, and it has led to some early smoke on a goaltender-controversy fire.

• Finally, the Sabres debuted their new third jerseys in a 3-1 loss to Detroit. Click here to see them. Warning: The link is decidedly NSFW. (That stands for “not suitable for wearing,” right?)