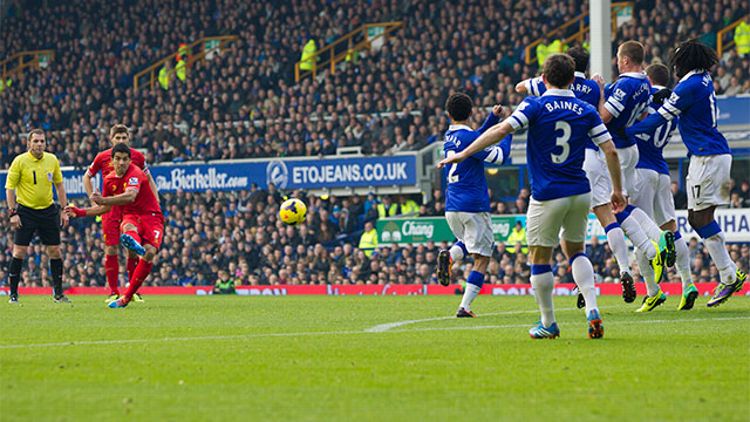 A look back at the action in the Barclays Premier League.

Chris Ryan: Arsenal benefited from a truly based Artur Boruc goalkeeping error and beat your annoying soccer fan friend’s favorite team, Southampton, 2-0. The Gunners had the kind of luck opposing teams typically have had against them in seasons past. While Boruc’s Almunia-esque moment was the highlight …

Aaron Ramsey’s near-miss backheel was the most memorable play …

Elsewhere in league action, Liverpool and Everton played out a goal-crazy draw of a Merseyside derby. Romelu Lukaku (seven goals in 10 Premier League games) continues to make Jose Mourinho look like a stubborn maniac with every goal he smashes in, and Kevin Mirallas almost ended Luis Suarez’s career (at least according to Liverpool manager Brendan Rodgers).

Speaking of Chelsea, the Blues beat West Ham, 3-0, putting Sam Allardyce on the hot seat. Frankly, it’s more a matter of when than if with Allardyce. His style of play just doesn’t suit the self-perception fans have of West Ham as a stylish, attacking team. If they’re going to be a mid-tier Premier League squad, their fans want to see them be mid-tier with a little panache. Allardyce doesn’t really do panache.

Manchester United dropped more points, drawing with Cardiff. After the game, the man managing United sounded very much like a man managing Everton:

Disappointed … It was similar to Southampton when we had the game under control with a minute to go and then we conceded from a set piece. We can’t keep dropping two points and we could have played better, but it’s a tough place to come after international duty and I would have taken the result before the game.

Yikes. Manchester City did a “running of the bulls” impression on Tottenham, winning 6-0. When they are on (or when they are at home), City are unbeatable. Too bad about that “playing at other people’s stadiums” thing. Manuel Pellegrini’s team is creeping up the table (six points behind Arsenal), but they will have to get some victories on the road — especially against tough but beatable opponents like Southampton and West Brom — if they want to challenge for the title.

Goal of the Week: Luis Suarez

Can Newcastle Keep It Up?

Brett Koremenos: The last three Premier League seasons have been quite the roller coaster for Newcastle United. After nearly qualifying for the Champions League in 2012, a run that resulted in Alan Pardew’s massive eight-year contract extension, the Magpies found themselves in the relegation battle for much of last season. Without any real effort to improve a leaky defense and still lacking in striking options after the departure of Demba Ba to Chelsea, this season had the French B Team primed for yet another fight to stay in England’s top flight. But since a loss to reeling rival Sunderland on October 27, Newcastle has taken all nine points in their last three matches — fixtures that included Chelsea and Spurs — and surged from irrelevance into the top eight.

The driving force behind this recent good form has been the clinical goal-scoring of Loic Remy. Despite being wrapped up in an ugly scandal off the field, the French forward has been in brilliant form since arriving at St. James Park on loan from Queens Park Rangers in early August. Remy has found success this year both out wide in Pardew’s preferred 4-3-3 and when partnered up top in a 4-4-2 with the ageless Shola Ameobi. With a goal against Norwich over the weekend, Remy has now found the net eight times in just 10 matches, a pace that conjures comparisons to Ba’s crazy scorching run from two seasons ago.

It goes without saying that a Pardew-led side will never be a staunch defensive unit. The Magpies are currently yielding the fourth-highest percentage of shots inside the 6-yard box this season, according to Whoscored.com, after leading that category during their meltdown last year. The recent rumors surrounding club captain Fabricio Coloccini’s desire to return to his native Argentina isn’t exactly uplifting news on that front either. His possible departure, along with the declining form of midfield destroyer Cheik Tiote, has Newcastle primarily banking on the brilliance of Tim Krul in order to avoid being a total train wreck defensively.

Even with those shortcomings, if Pardew can add another potent goal scorer in the January transfer window (Lyon’s Bafetimbi Gomis?) to complement Remy and add more offensive bite to a side already generating the fourth-most shots in the Premier League, Newcastle could find themselves competing for a spot in Europe once again.

Ryan O’Hanlon: They say that God laughs at our plans, and they also say that if you sync up your meal schedule with the time zone of your destination, it’s easier to fall asleep on the red-eye.

Whether I subconsciously booked my flight home in order to make it back just in time for the Merseyside derby, I’m not qualified to know. But for some reason — mainly, the option to fly out of Burbank instead of (Hel)LAX — I chose the Jet Blue flight that landed at JFK at 5:45 a.m. on Saturday morning. It’s about an hour-long car ride from the airport to my parents’ house, so the timing would work out perfectly. Two friends would swing by, my mom would make French toast, my dad would brew coffee from that new machine he hasn’t stopped talking about, and Liverpool would beat Everton.

My flight landed 30 minutes early, which was good. I also got a migraine on the plane (“they” were wrong), slept for maybe 90 minutes, and sat next to a dude who ordered six Coronas, two Bud Lights, and a glass of white wine, all of which was less good. The headache started to wear off, no doubt frozen by the now-arctic New York air, and my dad showed up on time and zipped home, with minutes to spare to stop off for bagels. (You aren’t legally allowed back on Long Island from Southern California until you eat a bagel.)

The game? I kind of remember it. There were a bunch of moments when I thought, Nothing’s really happening. This is weird! I tried not to say it because, well, there were six goals! There should’ve been multiple red cards! Many things happened! Except, I found myself frequently bored, mostly out of an inability to actually control my brain for extended periods of time, but also because the game was a high-frequency emission with six even higher spikes of joy and despair. It was intense for 90 minutes, but so consistently so that I just saw a straight line. For a league that’s often self-satirizing — listen to Andy Gray speak — the Liverpool-Everton game was the Premier League At Its Best. Unceasingly punch-drunk, with six goals off set pieces.

Liverpool didn’t win, but that coffee tasted like it was brewed by Gale Boetticher. He might be able to tell me if Robbie Fowler was smirking.

The Weekend in Hockey: Is It (Finally!) St. Louis's Year?