The Weekend in Hockey: A New Low in Philadelphia 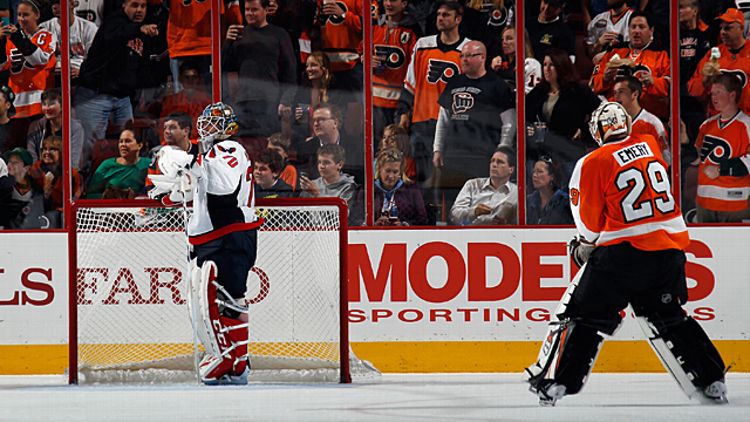 The biggest news of the weekend came on Friday night, when the struggling Flyers faced the Capitals. Despite missing the injured Alexander Ovechkin, Washington pumped five second-period goals past Steve Mason and Ray Emery on its way to building an eventual 7-0 lead. That had Philadelphia fans chanting for GM Paul Holmgren’s job, and set the stage for the game to devolve into a third-period gong show.

You’ve no doubt seen the highlights by now; Wayne Simmonds running anyone he could find, the line brawl that followed, and then Emery’s rink-length dash to fight his unwilling counterpart, Braden Holtby. Goalie fights are usually high entertainment, but this one was different. It was a ridiculous mismatch between a player with a long résumé of fighting experience and one who’d never been part of one at the pro level — and, more importantly, one who hadn’t done a thing to provoke it other than play for a vastly better team.

Emery won handily, at one point raining punches on the back of Holtby’s head while he was down — all while referee Francois St. Laurent bizarrely stood by, occasionally waving away any Capitals who looked like they might try to help. In postgame comments, Emery seemed to brag about making sure that Holtby “didn’t really have much of a choice” about the fight. In an additional embarrassment, the Philadelphia media named Emery the game’s third star, presumably for the fight and not his .733 save percentage.

But while the Emery fight got all the attention, it wasn’t the Flyers’ most costly of the evening. They lost Vincent Lecavalier and Steve Downie to injuries sustained in fights — the former to a facial injury that could sideline him for weeks, and the latter to a broken orbital bone that had him reportedly leaving the rink on a stretcher.

If the Flyers organization was bothered by Emery’s antics, it didn’t show it. Instead, it gave him the start Saturday night against the Devils, and was rewarded with a 1-0 win. It was the first shutout of the season for the Flyers, and probably one of the easiest any team will get to enjoy. The Devils couldn’t manage more than six shots in any period and put up just 14 on the night.

It was almost as if the New Jersey players were afraid to get anywhere near Emery. I can’t imagine why.

If the Flyers felt like yet another example of a league slowly losing its mind Friday, the Sabres provided a small dose of sanity Saturday.

Yes, that’s right, those Sabres. And those ones. Those ones, too. The same Sabres, in fact, who one prominent columnist recently called “embarrassing.” If you were going to pick a team to strike a blow for basic decency, it’s fair to say the Buffalo Sabres would be an unlikely choice.

But they took the first step toward rehabbing their image with Saturday’s decision to at least temporarily part ways with Patrick Kaleta. The oft-suspended agitator was scheduled to return to the lineup after serving a 10-game suspension for his head-shot on Jack Johnson. Instead, the Sabres announced that they were waiving him. He went unclaimed, clearing on Sunday.

The plan, according to GM Darcy Regier, is to send Kaleta down to the AHL to learn how to play the sport within the rules (or, as Regier artfully phrased it, to “redesign his game”). Call it the Matt Cooke approach, after the Penguins winger who famously went from borderline psychopath to model citizen after several suspensions of his own.

Of course, Cooke’s transformation was allowed to happen at the NHL level. Whether Kaleta ever gets a chance to do likewise in Buffalo remains to be seen. While Regier indicated the franchise wants him back, he also admitted it had tried unsuccessfully to trade him. But either way, the Sabres deserve some credit for finally sending Kaleta a message that enough was enough.

That good karma didn’t translate into a win, of course; these are still the Sabres after all. On Saturday, it was the Ducks’ turn to toy with Buffalo, building a 5-1 lead early in the third en route to an eventual 6-3 win. That dropped the league-worst Sabres to a 2-13-1 record, while moving the Ducks into a first-place tie with the Sharks in the Pacific.

The highlight of Saturday night’s game between the Canucks and Leafs didn’t even take place during the game, a dominating 4-0 win for Vancouver.

Instead, it was the pregame retirement of Pavel Bure’s no. 10. It was a moment that was an oddly long time coming, given that Bure had been retired for more than a decade and was already in the Hockey Hall of Fame. His relationship with the team had always been strained at best, especially during a playing career that often featured difficult contract negotiations. He eventually left on bad terms, holding out for half a season to force a trade, and it was only in recent years that Canuck fans seemed ready to forgive.

Saturday’s lengthy ceremony featured appearances from former Canucks coach and GM Pat Quinn and a dapper Gino Odjick, as well as this fantastic highlight video. If you’re a new fan or too young to remember the early ’90s, I highly recommend that link, since it captures just how ridiculous Bure could be. In an era that included guys like Mario Lemieux, Jaromir Jagr, Teemu Selanne, and Steve Yzerman in their primes, Bure was the league’s most exciting player. Saturday’s honor was well deserved. And this time, there wasn’t a single frowny face in the building.

As for the game itself, the Canucks outclassed the Leafs from the opening faceoff, outshooting them 47-21. Alex Edler was responsible for 12 of those Vancouver shots on his own, a nearly unheard of performance from a defenseman. It was a chippy game (that even featured a rare Phil Kessel fight), and those often play to the Leafs’ advantage, but not this time.

The win moved the Canucks to 21 points on the season, good for the league’s seventh-best record overall but only fourth place in the stacked Pacific Division. They’ll have a chance to make up some ground this week, starting a four-game road trip against Pacific rivals tomorrow night.

For the Leafs, the loss marked a tough end to a Western Canadian road trip that had started with easy wins over the Oilers and Flames. It also featured a serious injury to Dave Bolland that will likely keep him out for several months and leaves the team with only two healthy NHL centers. They don’t play again until Friday, so look for a roster move or two before then.

• Bure’s wasn’t the only number retired on Saturday, as the Avalanche honored Adam Foote. The hard-nosed defenseman’s no. 52 was raised to the rafters before Colorado’s game against the Canadiens. The Avalanche then went out and won that game, because that’s all they ever do these days.

• The Islanders finished off the first full week of the Thomas Vanek era with a pair of tough matchups with Atlantic Division teams, and came away with four points. On Friday, they spotted the Senators a pair of two-goal leads in front of a surprisingly sparse Ottawa crowd before coming back to earn a 5-4 win in the shootout. They followed that with a 3-1 win over the Bruins that saw Vanek get his first goal as an Islander.

Those two wins left them with 15 points through 14 games. Far from impressive, sure, but good enough for second place in the woeful Metropolitan. For a team trying to make the playoffs in back-to-back seasons for the first time in the salary-cap era, that’s probably good enough for now.

• Speaking of Ottawa: Remember how just a few days ago we talked about how the Senators would probably still get back into the playoff race thanks to an easy November schedule? Two games in, and they’ve put up a pair of homes losses to the Islanders and Stars. Both defeats came in the shootout, so Ottawa did get points, but this is a team that needs to start banking wins. What’s worse, goalie Craig Anderson was stretchered out of Sunday’s game after a scary goalmouth collision. Anderson was seen walking around after the game, and early indications from the Senators were that any absence will be brief.

• The Oilers’ nightmare season continued Saturday with a 5-0 loss to the Red Wings. There’s no shame in losing to a very good Detroit team, but the Oilers weren’t even competitive. It was their second straight home shutout loss, and the fact that yet another lackluster effort came on the heels of a reported players-only meeting can’t be a good sign.

• The Predators scored an impressive road win over the Kings on Saturday, getting a late goal by David Legwand and then holding on for a 4-3 final. The Predators are now 7-5-2 and are staying firmly in the West’s playoff hunt.

• Penguins rookie Jeff Zatkoff beat the Blue Jackets, 3-0, earning his first career shutout in his third career game. His first two hadn’t been quite as successful, as he surrendered 10 goals in a pair of losses. But the third time was the charm, as he made 19 saves in Saturday’s win. The Penguins are now seven points up in the Metro.

• Another rookie goalie looked impressive Sunday, as 26-year-old Reto Berra earned the decision in a 3-2 Flames win over the Blackhawks in Chicago. It was the first career start for the former Swiss League star, who’ll have a chance to earn the full-time starter’s job in Calgary after the Flames waived and demoted veteran Joey MacDonald.

• Finally, don’t look now but the Rangers have won three straight and are back in the Metro’s playoff mix. Granted, that streak didn’t exactly come against the league’s elite — they beat the Islanders, Sabres, and Hurricanes — but you can only play the teams the schedule gives you. They’ll have a tougher matchup tonight when they host the Ducks, followed by the Penguins on Wednesday.