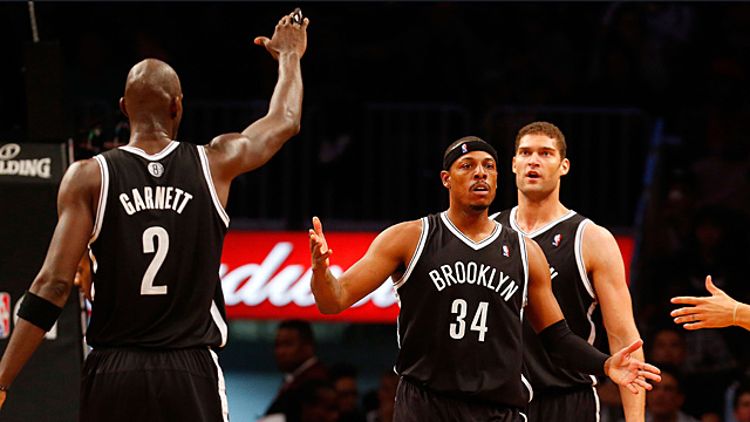 If there was a Year 1 winner when the Nets moved to Brooklyn, it was the Modell’s on Flatbush Avenue that sits across the street from the Barclays Center. What was formerly a rundown sporting goods store with little on the shelves transformed itself into a bright beacon of fluorescent light featuring row upon row of apparel sporting the logo of the borough’s newest franchise.

Ninety minutes before Brooklyn opened its 2013-14 home schedule against the Miami Heat, a few dozen people milled about Modell’s. I asked a casher if Nets stuff was selling fast. “Of course. It’s the first day of the season. They are going to buy it all,” she told me in an optimistic tone that sounded like the party line. I looked around. They were not buying it all. One guy inquired about two Nets hats; almost everyone else seemed more interested in purchasing soccer balls or asking about the length of the crew socks. An employee stocking the shelves said it wasn’t nearly as busy as the season opener last year. His take: The jerseys were too expensive and no one had any money. If the Nets won, however, the fans would come back after the game to buy something.

Across the street, giant images of a scowling Nets starting five glared out from the Barclays Center windows. Whereas Year 1 focused on “building the brand” because Brooklyn’s product on the court fluctuated between bad and uninspiring, Year 2 is about winning. During the offseason, Paul Pierce and Kevin Garnett joined Deron Williams, Joe Johnson, and Brook Lopez with the goal of making a push for the championship. “We’re aiming at amazing,” wonderful Russian nutjob owner Mikhail Prokhorov said Friday night. Aiming at amazing will cost $187 million in salary and luxury tax.

A Nets-themed drum corps played on the outside concourse under the watchful eyes of the larger-than-life starting five. A mix of commuters heading home after work and fans going to the game created a three-deep semicircle around the teenage performers. I couldn’t see through the crowd but managed to observe the performance via the iPad mini-screen of the man standing next to me. He held his Apple device aloft, filming the proceedings to view later.

Brooklyn was in the house. Do with that what you will.

Jay Z is gone, but he has not left the building. One of his songs came blasting over the sound system a little more than an hour before tip. Little touches credited to the former part owner and his creative team are everywhere at Barclays, from the Nets’ jerseys and logo to the stage lighting that highlights the court. Watching a game in Brooklyn, or even seeing an anonymous Heat scrub effortlessly drain 37 of 40 shots from behind the arc during shootaorund feels like an event. You are there to do one thing: pay attention to the basketball.

Hova got the last words before the game started, proclaiming Brooklyn as the birthplace of Michael Jordan and Biggie Smalls, then welcoming us to the Empire State. With 49 seconds left in the second quarter, he yelled, “Brooklyn, I need you to scream.” Brooklyn did not scream. In Brooklyn’s defense, half a minute earlier the Heat had taken their first lead since 1-0. Brooklyn may have been momentarily discouraged. Brooklyn may also have been hoping to beat the lines to the artisanal pretzels or fresh sushi in the main concourse.

During timeouts, the video screen above the floor showed celebrities in the crowd, accompanied by a refrain of “Who’s in the house? Who’s in the house?” A list from Friday (which is included in the official game notes), ranked from quietest ovation to loudest:

8. K. Michelle
7. Fabolous
6. Geno Smith, earning a mix of cheers and boos.
5. Chris Rock
4. Jadakiss
3. David Beckham, who has split allegiances, with a kid named Brooklyn and an MLS team in Miami.
2. Allen Iverson
1. Magic Johnson, who arrived during the second quarter.

The crowd at Barclays isn’t a fair-weather fan base, and not entirely because they haven’t had enough time to experience any weather. The video monitor showed a girl in a “Brooklyn Fan Since Day One” jersey. Granted, that was like 366 days before. Her female friend had a Reggie Evans jersey and a faux–Reggie Evans beard. The crowd booed at the right times and, for the most part, kept the energy high. The Nets and Brooklyn are building something together.

The Nets as constructed are a fascinating exercise in team-building by addition. They are clearly too old — the starting five hadn’t played together before the opener on Wednesday night because of injury and rest schedules — but they might not know it. Every win is going to be a true team effort, with Friday night serving as an excellent example; nine guys played between 19 and 32 minutes.

You get the impression that Pierce could continue putting up 17 and seven for the next decade, all herky-jerky up-and-unders and lopsided smiles. Garnett, who considered retiring before the trade to Brooklyn and may well be Father Time, looks awesome in the all-black warm-ups. They might have the best chemistry in the league. At one point, Joe Johnson got knocked to the ground near the baseline. Evans and another player exploded off the bench to help him up, a step ahead of Garnett. That two players beat KG to help an ailing teammate is a strong symbol of unity.

But still. Williams wants to run every time he gets the ball. It’s unclear if there will be anyone filling the lanes with him. Lopez continues to be unable to stay out of foul trouble, scoring seven points before sitting down with a couple of cheapies with two minutes left in the first quarter. He picked up his fourth foul three minutes into the third quarter. The new teammates are, understandably, figuring out where they all fit. The puzzle pieces might not be from the same set.

We’ll leave it with this observation: It’s going to be a long season if Andray Blatche plays 25 minutes a night.

But the plan worked against the world champions. After the final whistle blew, the BrooklyKnight celebrated the 101-100 victory. With a mix of disgust and apathy, LeBron James stalked off the court, throwing his sweaty headband into the crowd. It would make a nice souvenir, one that will go well hanging up next to a new Nets jersey.

Noah Davis (@noahedavis) lives a couple of Steph Curry jumpers away from Barclays.

The Weekend in Hockey: A New Low in Philadelphia