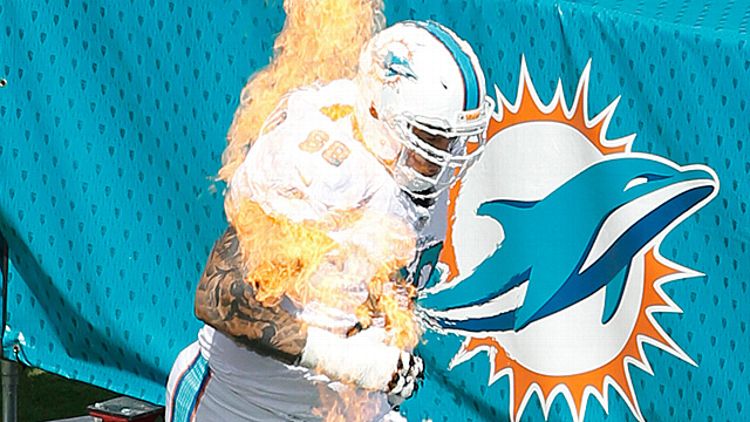 Last week, news broke that second-year Dolphins tackle Jonathan Martin had left the team after an incident with teammates in the team cafeteria. Initially, reports said Martin was taking time away for “assistance with emotional issues,” but in the days since, the alleged incidents involving Martin depict a culture of bullying in the Miami locker room. The ringleader implicated in that bullying has been Richie Incognito, who has been suspended indefinitely by the Dolphins.

Since the cafeteria incident was first reported, several new details have come to light. Martin was reportedly required to contribute $15,000 for a players’ trip to Las Vegas that he preferred not to attend, and fearing retribution, he paid Incognito the money anyway. NFL.com reported Saturday that Martin had been in contact with his teammates, including Incognito. The two reportedly exchanged several text messages, including one from Martin that read, “Yeah, I’m good man. It’s insane bro, but just know I don’t blame you guys at all. It’s just the culture around football, and the locker room got to me a little.”

The most recent allegations came today, when FoxSports.com reported that Martin told the Dolphins and the NFLPA that Incognito sent him threatening and racially charged text messages and voice mails. These messages are reportedly what led the Dolphins to suspend Incognito and ask for the NFL’s help with an investigation into the bullying allegations that have arisen in the past week. This morning, ESPN’s Adam Schefter tweeted some of the specific threats allegedly made by Incognito to Martin in a voice mail.

1: Richie Incognito left this VM for Jonathan Martin in April 2013: "Hey, wassup, you half n—– piece of (expletive)…

2. More Incognito to Martin: "I saw you on Twitter, you been training ten weeks. (I want to) (expletive) in your (expl) mouth….

Schefter reported that the NFL and the Dolphins had heard the voice mail.

Since arriving in Miami, Incognito has been involved in several incidents with opposing players, but he has a history of off-field issues that date back to his time at the University of Nebraska. As new details about the case with Martin and the Dolphins emerge, here is a collection of Incognito’s past transgressions that probably warrant mentioning, considering the news from this past week.

Winner of the Brian Murray Award as the best high school offensive lineman in Arizona, Incognito arrived at Nebraska as a prized recruit and earned a starting job as a redshirt freshman. He started 13 of 14 games at left tackle during the 2002 season. The one start he missed was against Iowa State, when Incognito was forced to sit out the first half after being ejected for fighting in a game against Penn State the week before.

The following spring, before his redshirt sophomore season, Incognito was suspended indefinitely by Huskers coach Frank Solich, for reasons that were never reported. He eventually started every game that season and was a first-team All–Big 12 selection.

In February 2004, Incognito was charged with three counts of assault after a fight at a party. He was found guilty on one charge of misdemeanor assault and forced to pay a $500 fine.

Before his redshirt junior season, Incognito was suspended by Bill Callahan for repeated violations of team rules. Two weeks later, Incognito withdrew from the university. He later enrolled at Oregon, but was dismissed from the program after only one week. “There were conditions we had set down and set forth for him to be admitted to our program, and they were not met,” then–Oregon head coach Mike Bellotti told The Oregonian. That spring, Incognito declared for the 2005 NFL draft.

Despite sitting out an entire season and injuring his knee at the NFL combine, the Rams took Incognito in the third round of the 2005 draft with the 81st overall pick.
During his five-year stretch with St. Louis, Incognito had several run-ins with fans, teammates, coaches, and opposing players. There were reports of fights with teammates during training camp, but most of the controversy around Incognito stemmed from his confrontations with opponents. Incognito’s temperament and style of play earned him a reputation as one of the league’s dirtiest players, a title that became quasi-official after a 2009 Sporting News player poll declared him exactly that. Later that season, Incognito was benched by head coach Steve Spagnuolo after incurring two personal fouls in the first half of a game against the Tennessee Titans. He was released two days later.

Incognito was claimed on waivers by the Bills after being released by St. Louis. After a short stint in Buffalo, he was signed by the Dolphins in March 2010.

In August of this year, it was reported that Incognito punched a hotel security guard at Liv night club following a Miami Heat playoff game, but later that month, NFL.com’s Jeff Darlington wrote that three witnesses maintained that Incognito was actually attempting to defuse the situation and was the one who reported the assault to police.

In that same story, published shortly after an on-field incident during which Texans defensive lineman Antonio Smith swung his helmet at Incognito during a preseason game, Incognito revealed many of the personal problems that he dealt with earlier in his career. “Pretty much every facet of my life was in turmoil, and I was basically waging war against myself at that time,” Incognito said. He went on to tell Darlington that although he regularly smoked marijuana in the past, he had gone four years without it, and meditation and other relaxation methods had helped alleviate many of his anger issues.