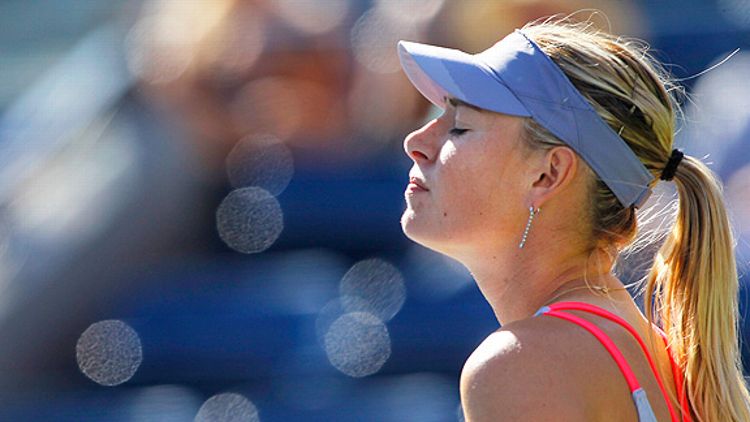 Watching players at Wimbledon is like seeing your school friends all cleaned up and crisply side-parted in church. Watching them at the U.S. Open, however, is like seeing them out at the mall, trying on colorful looks and getting loud, unsolicited, and entirely heartfelt feedback from a gum-snapping shopgirl.

Tennis snobs often sniff that the U.S. Open is loud, unrefined, and entirely lacking in manners, particularly those rowdy night crowds filled with, well, New Yorkers — the financebros and fashionistas who, day in and day out, give the city its particular alchemy of style and sweat. But can you even blame them? The day matches are sizzling, the night matches run late, and the lines for those signature Honey Deuce drinks are long enough that you might as well grab one for each hand, and maybe one more if they’ll let you.

But I’m getting ahead of myself — we haven’t quite reached the real night sessions yet. No, the first week of the U.S. Open is the domain of the daytime crowd, the middle-aged moms and dads from Connecticut who take the MetroNorth to Grand Central and then hop on the 7, clutching their visors and spray-bottle fans and strategizing about their plan of attack. For me the U.S. Open was a father-daughter affair, with my dad — now retired and thoroughly immersed in a twilight career as a tennis club pro — taking me along to the early rounds every year largely so he could do things like ship me off as a mercenary to, say, get Stan Smith’s signature on a tennis ball. “He can’t say no to you,” he would urge. “Who’s Stan Smith?” I would say.

If you’re reading this, and you’re able: Take a day off this week and go. You’ll see up-and-comers on side courts so intimate you can smell the tennis balls in their bags, and a few years later you’ll realize that up-and-comer you sat 10 feet away from was someone like now-no. 7 Mardy Fish. And you’ll develop a sense of just how hard it is, just how grueling, how painful, how mundane, how ridiculously hot it is, not even to win the whole thing — but even to come anywhere close.

Monday’s Action
Under brilliant poststorm skies, the first rounds of the U.S. Open commenced Monday. And, yes, that once up-and-comer Mardy Fish lost only five games in a quick 6-2, 6-2, 6-1 dispatching of Germany’s Tobias Kamke. Fish is one of those smile-lined players who is pretty much instantly relatable, because while he’s better at tennis than you or I will ever know, he’s only just hitting his stride at age 29 — too young to be old in the real world, but too old in the tennis world to have much time to spare. After a respectable if middling career as a pro, the past year-plus has been a charmed one for Fish, who is the latest in a long line of tennis players to Get Serious About Fitness and realize that it actually works. Ranked eighth in the world, he’s a notch below guys like Novak Djokovic or Rafael Nadal. But he’s an American who is peaking just in time to be savored and loved by a home crowd who knows him from a good weight-loss tale. (Fish lost 30 pounds last year.) Really, the only downside, with respect to the particular demographic to be found at the U.S. Open, is that he’s not actually Jewish.

Taking Stock: A Look at the New York Giants’ Crash

It was a tough day for Petra Kvitova and Maria Sharapova, the two women who faced off in the Wimbledon final just two months ago. Since her victory at Wimbledon, the spindly Kvitova has wilted, no doubt unaccustomed to the pressure-filled panopticon in which Grand Slam champions are held. The no. 5 seed lost her first set 7-6 to Alexandra Dulgheru in a tiebreak and was defeated 6-3 in the second, giving her the unpleasant distinction of being the first Wimbledon champion in tennis’ modern era to lose in the first round of the subsequent U.S. Open. “I know I’m still young and this is something new for me,” the shy Kvitova said following the match. “I felt pressure, of course. Maybe it’s a little of this. Everything is in the head.”

Sharapova, the runner-up then, looked all out of whack in the first few sets of her match against Heather Watson, a 19-year-old unseeded Brit who kept utterly calm as Maria carried on. Down a set and trading games in the second, Sharapova eschewed conservative play or tactics of attrition, instead doubling down on her groundstrokes and shrieks. (As the BBC’s Chris Bevan put it: “Sharapova is not just chucking the kitchen sink at this match, she’s yanked out the fridge and washing machine too and is hurling them at the Guernsey teenager.”) While it was a risky move that had wildly uneven results early on, Sharapova recovered to overpower Watson in the end, winning 3-6, 7-5, 6-3. As well she should have: The two are ranked no. 4 and no. 104 in the world, respectively. Watson’s compact physique and unexpected tenacity were reminiscent of the 2009 version of Melanie Oudin, whose run to the quarterfinals that year dazzled the crowds but will not be repeated: The American was bageled 6-0 by Italy’s Romina Oprandi in the first set of her match Monday and dropped the second in a 9-7 tiebreak.

Oudin wasn’t the only young American to be dispatched in straight sets. Nineteen-year old Ryan Harrison, considered by many a huge upset contender in his first-round match against the 27th-seeded Marin Cilic, instead flamed out before most spectators had even made their way to Louis Armstrong Stadium. Harrison has been compared, variously, to players like John McEnroe and Andy Roddick, given his raw talent and even more raw emotions. But on Monday it was mostly the latter on display. Harrison threw rackets and punted balls during the course of his straight-set 2-6, 5-7, 6-7 (6-8) loss to no. 27 seed Marin Cilic, causing typically understated commentator Mary Carillo to label him “Mister Crankypants” and call him a brat. (Martina Navratilova threw the word “pissy” into the mix.)

Similarly emotional on the women’s side was Marion Bartoli, the 8-seed who defeated Serena Williams in straight sets in the fourth round of Wimbledon. Known for her eccentric on-court behavior — she shadow-boxes between points, talks endlessly to herself, and throws tantrums — Bartoli displayed plenty of same en route to defeating Alexandra Panova in a 7-5, 6-3 match that was tougher and less watchable than it probably needed to be. (She stopped short of banishing her parents, though.) The fierce Frenchwoman will next face 19-year-old American Christina McHale, whose strong summer season included a defeat of world no. 1 Caroline Wozniacki — although, to be fair, is there anyone who hasn’t beaten poor Woz at this point?

I must have a thing for the French, because two of the players I’m pulling for hardest are Bartoli — you either love her or hate her, and I can’t get enough of the nutso psyche she displays — and her countryman Richard Gasquet, he of the cocaine kisses (“and good ones, too”). Ever since his 2007 quarterfinal five-set win over Andy Roddick at Wimbledon I’ve been drawn to Gasquet, who was then a cocky, young, backward-hatted player and is now, at the ripe old age of 25, in an odd but intriguing transitional phase in his career. Seeded 13th at the U.S. Open he nevertheless flies slightly under the radar and is never truly considered a real threat. Still, playing in the christening match on Flushing Meadows’ new fifth-largest court, Gasquet defeated Sergiy Stakhovsky, a player who many had predicted would put up more of a challenge.

In other non-Venus first-day action of note:

The Days Ahead
The early rounds are jam-packed with great players. On the men’s side, Novak Djokovic and Rafael Nadal are slated to play, as are fan favorites like James Blake, Jo-Wilfried Tsonga, and David Ferrer. In ladies action Victoria Azarenka will be hurting eardrums all around Queens, while Li Na, Caroline Wozniacki, Svetlana Kuznetsova, and Kimiko Date-Krumm will also be out there. As will, of course, the Queen of Flushing, Serena Williams, who despite her no. 28 seeding remains a favorite to win. This will be her first U.S. Open in two years; the last time she was there, as you may recall, she was threatening to shove balls down throats. Asked Monday if she learned anything from “that controversial episode,” she was classic Serena. “You mean in the singles or doubles?” she asked back. “I just remember I lost, and that was that. I got really popular. A lot of people were telling me they thought I was super cool, that they never saw me so intense. So, yeah, it was awesome.”