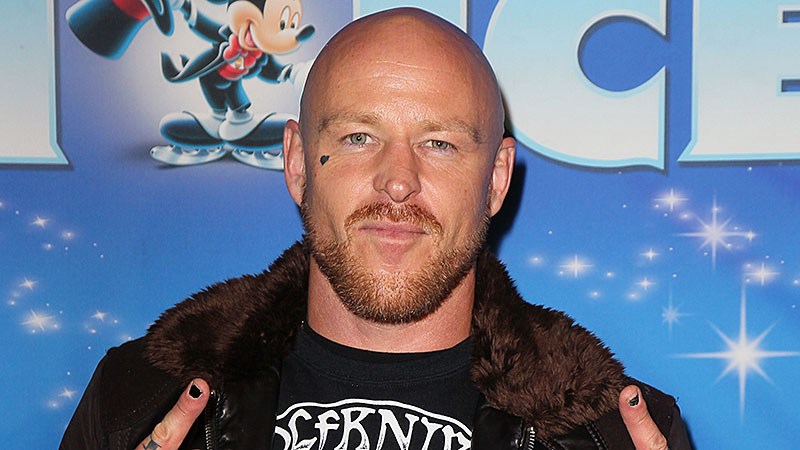 Living in New York City, I do most of my reading on public transit. So, the first obstacle I encountered while reading The Awesome Guide to Life: Get Fit, Get Laid, Get Your Shit Together, by pro skateboarder turned radio host and MMA dabbler Jason Ellis, was not wanting to be seen reading it. For one thing, there’s the title, which, in my opinion, transmits an air of sketchy desperation to my fellow passengers, should their wandering commuter eyes happen to glance at it.

Then there’s the cover image: the author Ellis — hair cropped short, black sunglasses, black sleeveless T-shirt, inked-up arms crossed in defiance of everything un-awesome — standing in front of a sleek sports coupe. On either side of him crouch two scantily clad ladies — one in a black leather bra with metal spikes and a black G-string, the other wearing a black bikini top and pleated, red plaid schoolgirl skirt — gripping the author’s legs as if he were a life preserver in a stormy sea. They are also, for some goddamn reason, brandishing samurai swords. It’s like a doodle on the back of a seventh-grade notebook come to life. Coupled with the title, it paints the person reading the book as a solitary tragi-wankfest, trying to figure out why they can’t find physical companionship. Now, putting aside whether that is in fact true of them or not, it’s certainly not a look I’m trying to go for. Or maybe that’s just my imagination. At any rate, I found myself reading the book inside an open issue of The New Yorker, just in case.

On one hand, I think it’s fair to say my discomfiture even holding this book in a way that allows strangers to see it means I am obviously not in its dick-swinging target audience. But on the other hand, I suspect Ellis would say that my East Coast–elite, beta-male insecurity in the face of incalculable awesomeness means I am JUST the kind of guy who NEEDS this book.

First, the author: Jason Ellis is an Australian-born former professional skateboarder of the vert variety who hosts a popular radio program called “The Jason Ellis Show,” airing weekdays from 3 to 7 p.m. EST on Sirius Satellite Radio. The show is like a more ADD Howard Stern Show — with a set of zany cameo characters and signature segments — crossed with the fan interplay of a sports call-in show. The show leans heavily on Jason recounting various tales of drug use and group sex, while giving advice to callers on how to achieve the same. Ellis is also the author of the New York Times best seller I’m Awesome: One Man’s Triumphant Quest to Become the Sweetest Dude Ever, which details his rise from Australian rock kicker to pro skater to MMA fighter to radio host.

Reading through, though, it becomes clear that, despite the chapter headings, the entire book is really only about getting straight guys laid, and the parts about things like getting fit and sartorial tips, even the relationship chapters, are really just strategies for increasing the reader’s odds of getting a woman to agree to said act.

It’s tempting to read some of the passages in this book and wonder how much of it was written tongue in cheek, because, I mean, it’s either a tongue-in-cheek satire of heteronormative Bro-Man-Dudes, or it’s idiocy bordering on ignorance, masquerading as keeping it real, jock truth-bombing.

• On fitness: “What’s so bad about being fat? Well, it’s scientifically proven that being fat makes you stupider. It’s like the fat chokes off the blood to your brain or something … Maybe that’s why fat people don’t realize they’re dying.”

• On hip-hop, channeling Lorde: “Hip-hop has gone completely batshit crazy. I don’t see how anyone can listen to another song about partying in the club when there is no chance that anyone could ever get into that club in real life.”

• On texting women: “There is no place for ‘LOL’ in any man’s text messages.”

• On women faking orgasms: “Personally, I sleep with a lot of girls, and I can pretty much guarantee no one who’s having sex with me has to fake anything.” (I love that he writes “pretty much guarantee,” which is basically blowhard code for “probably.”)

This is pretty much what you would expect from a book with two crouching women holding samurai swords on the cover, right? That being said, there are some passages I found actually troubling.

Ellis makes a pretty big show of rejecting all forms of hatred and, specifically, homophobia. From Chapter 2, “How to Get Your Shit Tight”: “Finally, if you hate gay people or people of other races, you need to cut that shit out immediately.” I agree! That said, there are some mixed messages in here. On the one hand, don’t hate gays. On the other hand, Ellis is more than willing to define what is and what is not manly. For instance, Chihuahuas: “And there is not a straight man alive who can pull off a chihuahua. You need to have conversations with your dog, and chihuahuas are too nervous to handle man conversation.” And television: “Television was invented for women. T.V. is fake drama and women love fake drama.” Also mud masks: “But I believe that to get the most out of life, sometimes you have to be willing to look a little fruity.” And butt cracks: “If you ask me, it’s a fairly girly thing for a man to expose his ass crack.”

Now, I guess this is where a dude like Ellis calls me out for being overly PC, but telling people not to hate gays, while also stating that no straight man could pull off owning a Chihuahua, and using terms like “fruity,” isn’t so much a rejection of homophobia as it is a moving of the homophobia goalposts. Congratulations — you didn’t call a guy a homophobic slur, you merely considered him fruity for having a small dog. Progress indeed. Equally as odious is Ellis’s rationale for having gays around: “If you don’t have any gay friends, you should probably get some. If nothing else, it might help you get laid.” Yes, “if nothing else,” gays are useful vagina lures. You should get on that.

Then there’s the chapter “How to Be a Chick,” which is literally mansplaining in its purest form. “Okay — one more time, let me remind everyone that I love women, and I have zero respect for guys who disrespect females. And, ladies, please remember everything I’m about to say is for your own good.”

Drop them truth-bombs, broham! “Ladies, if you have big tits hanging out of your shirt, to us, that makes you look like a whore.” Boom-shaka-laka! But, hold up, conversely “… if you have little titties, you might think there’s no point in exposing any part of them … No man can deny sporty boobs.” Unconventional wisdom!

So, are you ready to be awesome?

See all Triangle Review of Books