The Trenchie Awards: The Vikings’ O-Line and the Best Line Play From Week 10 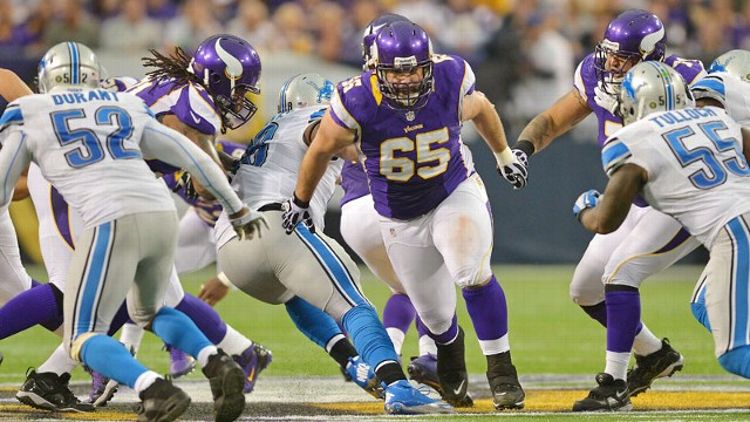 In 2008, Adrian Peterson’s best season to date, the Vikings offensive line stood as one of the pillars of a 10-win division champion. The left side consisted of former first-round picks Bryant McKinnie and Steve Hutchinson, with veteran Matt Birk at center. No Viking caught more than 53 passes that year, but Peterson still managed 1,760 yards for the season. Led by Hutchinson, at that point still one of the best players in football, Minnesota’s offensive line was the key to its offense.

Four seasons later, not a single starter from that 2008 group remains, but again, the Vikings have looked to their offensive line as a place from which to build. That movement continued this spring when Minnesota took Matt Kalil with the fourth overall pick in April’s NFL draft, and the returns are already noticeable. Less than a year removed from a torn ACL, Adrian Peterson is on pace for his best season as a pro and one of the best seasons ever for a running back, and some of that credit goes to the group the Vikings have reassembled up front. 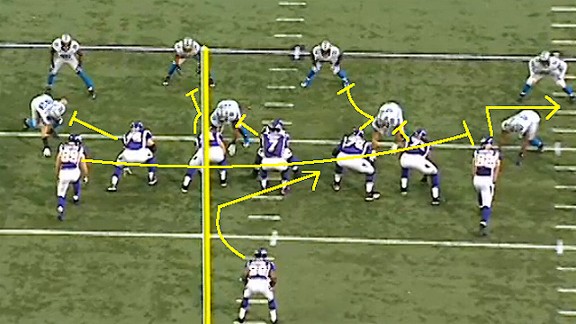 This is a play from the second quarter of Peterson’s 171-yard day on Sunday, his fourth straight game with more than 100 yards. Minnesota has a second-and-10 from its own 14. The Vikings are lined up in what amounts to a double tight end set, with both playing just off the line of scrimmage. Most of the action, including Peterson’s initial movement, is to the left, but with John Carlson pulling back toward the right side, it’s clear that the play is a designed cutback for Peterson. 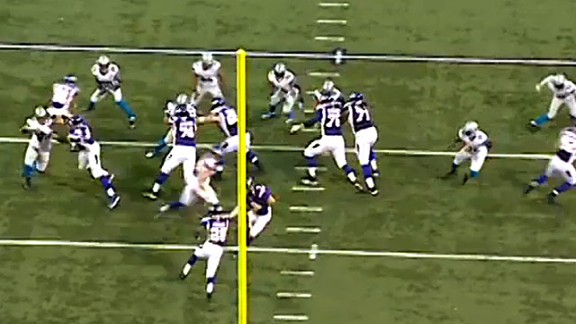 What initially looks like a difficult front to run against — eight defenders, including a safety walked down into the box — is made less intimidating when we realize the Vikings have eight blockers with which to attack it.

There’s a lot happening here, and each piece is important in what will eventually be a 15-yard gain for Peterson. Left guard Charlie Johnson and center John Sullivan begin a combo block on the one-technique tackle that will eventually end with Sullivan coming off the double team onto the backside linebacker. Right guard Geoff Schwartz and right tackle Phil Loadholt do the same on the three-technique tackle and the middle linebacker.

Kalil, no. 75, doesn’t have one of the more important blocks on this play, but this is just another example of what made him a top-five pick. The rookie’s pass protection has been excellent this year, but he’s also capable of delivering one punch to Kyle Vanden Bosch that sends him back onto his heels. The concern that occasionally comes with mobile offensive tackles like Kalil is that they lack the power or the mind-set to be dominant in the running game. Kalil isn’t the run blocker that he is the pass blocker quite yet, but he doesn’t lack what he’ll need to get there.

Next to Kalil is one of the play’s key blocks that we couldn’t see in the initial shot of the formation. Wide receiver Jerome Simpson not only accounts for the safety that’s come down to defend the run, but he goes after him. Just as we saw with Tampa Bay last week, it’s often a wide receiver or tight end that is responsible for the block that springs huge gains, and having a group of pass catchers who are willing blockers is a necessary part of big-play running game.

The tight ends, initially lined up on opposite sides of the formation, are actually the two blockers responsible for clearing out the cutback. Kyle Rudolph, no. 82, actually runs a run to the outside that takes the play-side linebacker with him. This allows Carlson a free shot on the defensive end as he pulls back to the right. 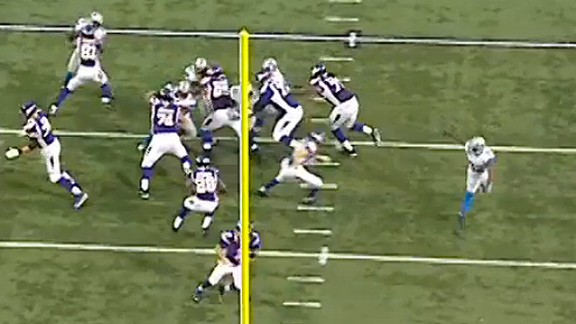 It’s a shot he doesn’t even need. Left defensive end Cliff Avril gets too far up the field, and he’s out of the play without Rudolph making contact. When Peterson goes down at the end of the play, the end-zone film clearly shows a dismayed Avril with his hands on his helmet. The play is actually designed to gash the mistake he just made, and it’s likely a piece of the game plan based on a recognition that he has a tendency to make it. When the run action goes away, it’s Avril’s responsibility to squeeze the play down by working down the line of scrimmage rather than up the field. Here he bites on Ponder’s roll-out and it leaves a massive crease for any running back, let alone one who doesn’t need it. 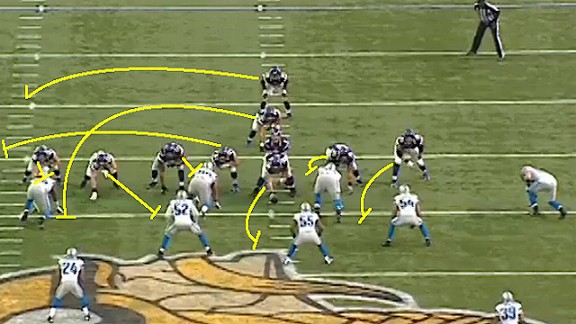 When everyone is healthy, there are three elite players on the Vikings offense. Two of them are first-round talent skill players who are arguable MVP candidates. The third is John Sullivan. The fifth-year starter from Notre Dame had an excellent 2011, and this year hasn’t been much different. The above play is Peterson’s 61-yard touchdown from the fourth quarter on Sunday, and as impressive as Peterson’s run is, Sullivan’s block is better.

The play is an outside run to the right, and as the play-side tight end and right tackle block down, it allows both the right guard and fullback to act as lead blockers on the play. Most of Minnesota’s offense is provided an angle to their assignment by the scheme. Sullivan is not. The middle linebacker is lined up almost directly over him at the snap, and with all the action on the play going to the right, he’ll need to take a perfect angle to cut him off on the way to Peterson. 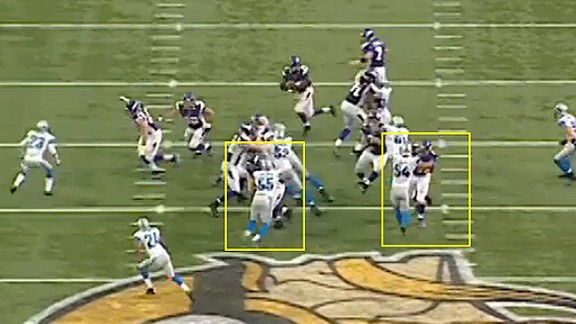 Here, we can see just how far Sullivan has to go in order to make his block. The play started on the left hash, and the center is more than halfway to the right one before he makes contact. Again, with all the action going to the right, there’s nothing holding the middle linebacker in place, even for a moment. It’s a game of quickness and angles that Sullivan should probably lose and doesn’t. Kalil has a block that, while not as vital to the play, is even more difficult. His angle to the backside linebacker is tougher than Sullivan’s to the Mike, and he still manages to get a good piece of him. Combined with the power evident on the previous play, this type of mobility is what has Kalil on his way to being the fourth elite member of Minnesota’s offense. 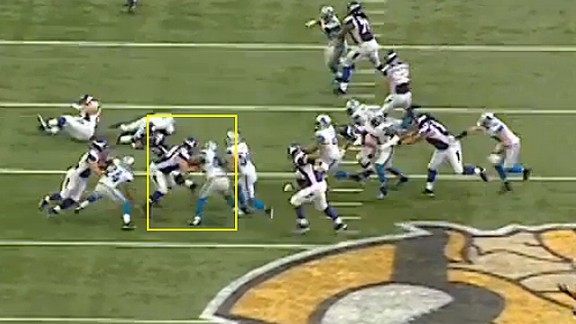 Just getting to the linebacker on the play would be enough, but Sullivan isn’t done. Not only does he maintain contact throughout; just as Peterson bounces outside his fullback’s lead block on the strong safety, Sullivan is able to completely turn the middle linebacker back inside. On the play, he’s moved from the hash mark on the left side of the field to halfway between the numbers and the hash mark on the right side. The difficulty of doing that is hard to explain. It involved the right step, the right angle, the adequate quickness, constant footwork, and the desire to even make that complete of a play. Plays like that leave no question who’s the leader of this new Vikings line and why AD is enjoying its benefits.