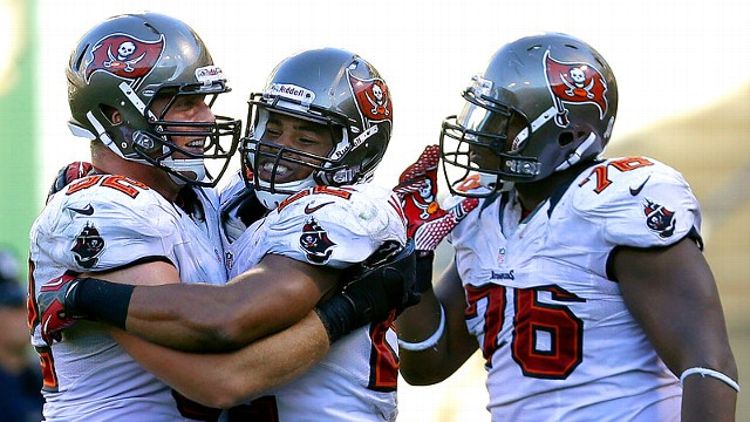 Coming into the season, Tampa Bay’s offensive plan was clear. With Vincent Jackson, the Bucs added a new option on the outside for their young quarterback, but each of their other two major personnel decisions seemed like moves toward a more grounded attack. First, Tampa signed All Pro guard Carl Nicks away from New Orleans for $47.5 million — the hope being that the combination of Nicks and Pro Bowler Davin Joseph could replicate the Nicks–Jahri Evans tandem that gave the Saints the best guard combination in football. A month later, the Bucs traded back up into the first round to grab Boise State running back Doug Martin — a needed replacement for the ineffectual LaGarrette Blount. Nine weeks into the season, Tampa Bay has finally developed that devastating running game they envisioned this spring. It just hasn’t come about exactly as planned.

Joseph, lost in the preseason to a knee injury, won’t play a down this year. Nicks joined him on injured reserve last Tuesday following Martin’s breakout game against Minnesota. The thought was that, now missing its top two interior linemen, the Tampa running game would slow — both against Oakland and for the rest of the season. Then Doug Martin went and had one of the best rushing games in NFL history. The rookie’s 251 yards came on just 25 carries, and they came on a mix that seemed one part scheme, one part Doug Martin, and about three parts relentlessness. 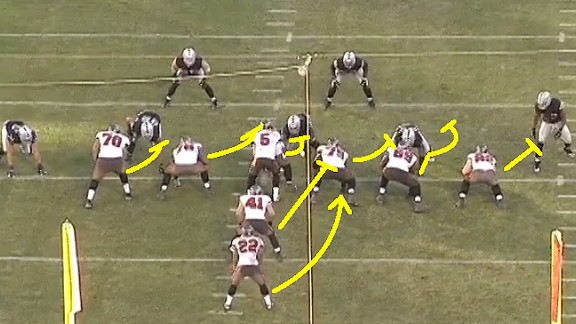 This is Martin’s fourth touchdown — the 70-yarder in the fourth with Tampa already leading 28-17. The Bucs have first-and-10 from their own 30 and are lined up in the I-formation with a tight end to the right. It’s a simple zone lead to the right, but the typical blocking assignments are thrown off by the shift in Oakland’s front seven. The Sam linebacker has come down into a Bear position over the tight end, and the entire defensive line has shifted one man to the right.

In a way, this shift plays into Tampa’s hands. Right defensive end Matt Shaughnessy’s wide technique leaves him out of the play entirely, and the Sam linebacker turns from a tough-to-account-for, second-level defender to a de facto lineman who becomes an easy target on the kick-out block by the tight end. 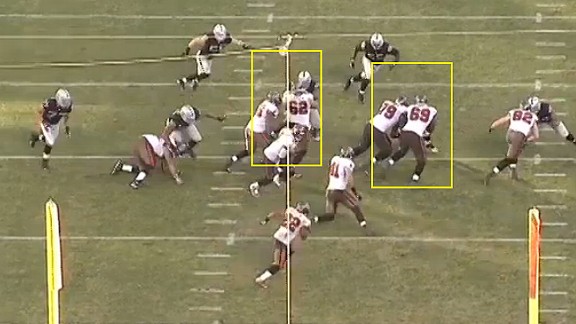 Here, the shift forces the offense to stray from its default assignments. In a standard 4-3, the man being cut by Donald Penn on the left side would be lined up between left guard Jeremy Zuttah and center Ted Larsen. The shift puts the down lineman in their combo-block assignment all the way on the other side of Larsen, complicating Zuttah’s task of helping on the defensive tackle before he or Larsen moves to the second level. Zuttah has to move about three yards to get there, but he does, and it’s that sort of effort that defined Tampa’s running game all afternoon.

The combo block between right guard Jamon Meredith and right tackle Demar Dotson is simpler, and it’s well executed. Dotson does an excellent job keeping his shoulders square to the line of scrimmage and keeping his outside arm free in preparation for coming off onto the linebacker. 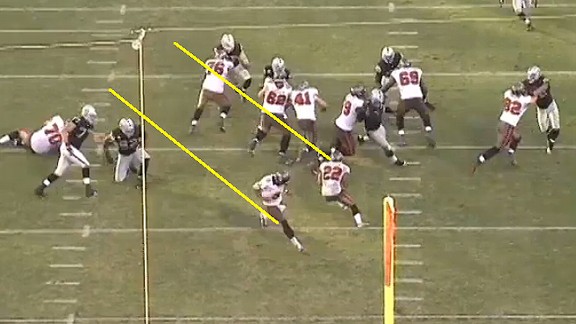 Zuttah’s effort is commendable, but it’s made moot by Larsen’s excellent block. With the down lineman lined up in the gap to his play side, Larsen isn’t able to reach him, but he does an excellent job of sustaining the block. This is where the benefit of the zone scheme comes in. Driving defenders out of the cutback lane is just as effective as preventing them from getting to the play side. With Larsen engaged with the lineman, Zuttah up to the linebacker, and Shaughnessy caught up in the debris of the backside cut block, Martin has an easy lane back to his left. The play is blocked so well that fullback Erik Lorig can only run into the mess and look around. A broken tackle later, the Pocket Hamster is dancing in the end zone at the end of a historic day.

Sustaining blocks is what led to Tampa’s success all game. Zuttah and Meredith aren’t the maulers the Bucs originally planned to have inside, but that doesn’t matter as much when a team makes the sort of collective effort Tampa made on Sunday. Everyone from the linemen to the fullback to the tight ends was playing through the whistle, and that leads to holes, no matter how small or how temporary. For a back as good as Martin seems to be, that’s more than enough.

The facts about Von Miller are fairly simple. In his second year, he is one of the five best defensive players in the league. Along with Cameron Wake, he’s one of the two best edge rushers in football. His play in both the run game and in coverage has improved. If this all continues, there will be a point where it only takes the careers of two players for us to consider the 2011 NFL draft a historic one for defense. (We’ll get to the other one in a bit.)

Miller had another three sacks on Sunday against Cincinnati, but even though it was a career high, it was far from his most impressive performance as a pass rusher. The first two came mostly as a result of great coverage downfield. The third, though, is an example of what makes great pass rushers so difficult to deal with. 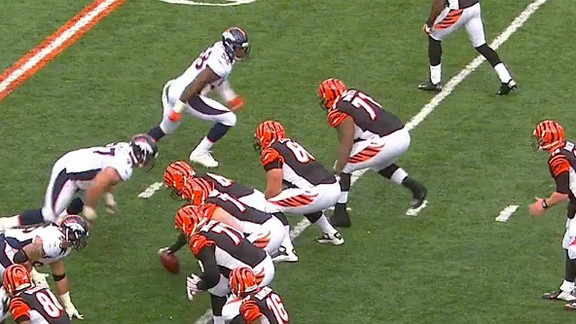 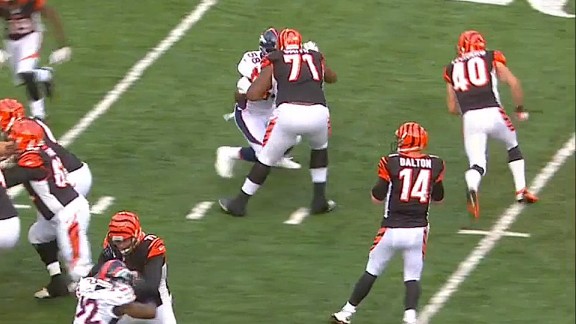 This is a third-down play in the second half, and here, we can see that before contact is even made, Miller has right tackle Andre Smith beat. Because he’s forced to account for Miller’s speed to the outside, Smith tries to get every bit of ground he can before settling into his pass set. From where the play starts to where Smith sets up is two full yards. The hope is that the extra distance will prevent Miller from quickly getting to his edge.

It does, but at a cost. No matter the sport, the notion of being on one’s “heels” always comes with a negative connotation. Usually, though, it’s more figurative than literal. Not here. Because he’s so focused on getting backward, Smith’s left toes are actually off the ground when Miller gets to him. Miller combines a lot of strength with that speed, and the extra help in leverage he gets from Smith’s lack of balance is more than enough. 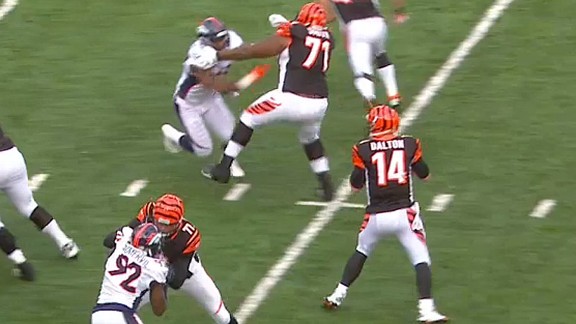 He delivers a two-hand punch to the chest, and with it, Smith flies backward. All the former first-round pick can do is flail his left hand in an effort to grab onto the passing Miller before he drags down Andy Dalton. It’s not nearly enough, and Miller hops back inside for an easy third sack.

Now for that other member of the 2011 draft class: It’s been a few weeks since I looked at what makes Watt the greatest athlete of all time (possible exaggeration), so I figured it was time for a brief return to the subject. What’s allowed Watt to be so dominant through the season’s first eight games is his ability to quickly diagnose plays. Even if positioning or scheme put him at a disadvantage pre-snap, Watt is able to quickly recover and make himself an active part of the play. Much of this deals with the mental aspects of the game, but it’s also helped through technique. 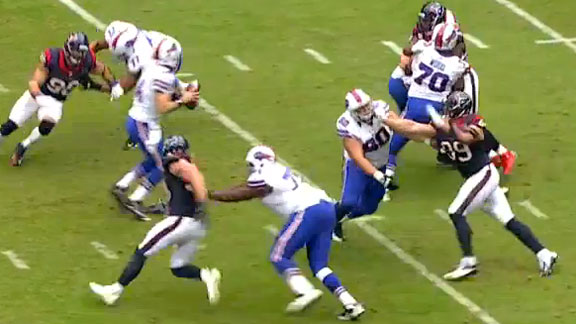 This is a play from the end of the first half against Buffalo. The Bills are driving on third down, and Watt lines up on the outside shoulder of right guard Kraig Urbik. As he comes off the ball, Watt does a very nice job getting his hands onto the offensive lineman and extending. Urbik’s body is now so far from Watt’s that even at full extension, the offensive lineman’s right arm can’t touch. By creating space between himself and the offensive lineman, Watt is free to look up, diagnose the play, and shed the blocker based on which direction the ballcarrier moves. Here, Ryan Fitzpatrick steps back up in the pocket, and Watt is able to swim his left arm over Urbik and dive back inside to drive his league-leading sack total up to 10.5. There’s really no way to overstate how many processes — both mental and physical — are happening at once as the play happens, and the ability to perform each of them in sync is what makes Watt the best defensive lineman (and player) in the league.