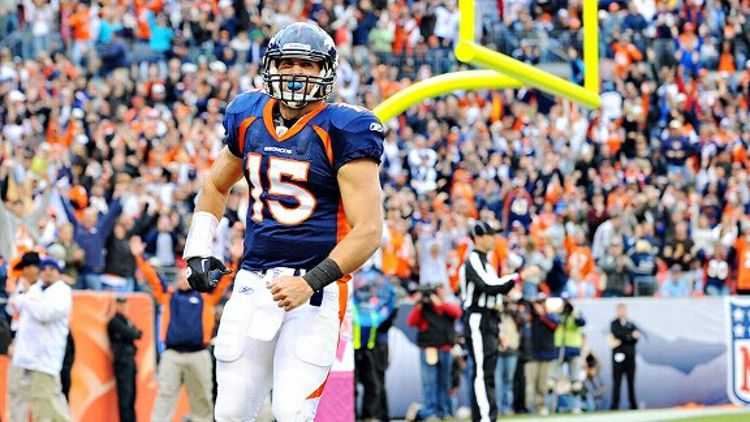 It happened. Down 23-10 to the San Diego Chargers at the half, and in front of the home fans, Denver coach John Fox finally said: “Screw it. Things can’t get any worse. Let’s put that Tebow kid in.”

And so began the Tim Tebow Era in Denver. Tebow did his Tebowy thing. He ran quarterback draws out of the shotgun, yelled his face red after big plays, and ultimately came up short. But he did give Denver fans and Broncos BQBL owners a lot to look forward to. Denver now has a bye week, which it can use to make the Tebow package bigger, before the Broncos unleash it against the lowly Miami Dolphins. Sorry, I tried as hard as I could, but I simply can’t restrain myself from making Tebow package jokes. I am ashamed.

This week, the BQBL was filled with so much ineptitude that even Kyle Orton’s 34-yard first half, Michael Vick’s four picks, and Eli Manning’s game-losing interception couldn’t top the absolute pee puddle of a performance Kevin Kolb put together. The man who once started over Vick is now being benched in favor of the pride of Tarleton State — Richard Bartel.

Arizona Cardinals (Kevin Kolb and Richard Bartel), 96 points: Kevin Kolb was gloriously atrocious this week. Let’s have a look at how he started his Sunday in Minnesota:

The Cardinals had possessed and attempted to advance the football five times, gained 25 yards of total offense, and Kevin Kolb had one completion for nine yards. He continued on his tear of terrible, throwing another pick and getting to know Jared Allen very intimately through repeated backfield run-ins with the once-mulleted defensive end. Kolb was so hopeless that Ken Whisenhunt mercifully benched him for Richard Bartel. Whisenhunt made the conscious decision that his best option at quarterback is a man who has been cut from the Dallas Cowboys, Cleveland Browns, Jacksonville Jaguars, and Washington Redskins. As an owner of the Cardinals in the BQBL, I wholeheartedly support this decision. Bartel’s 33 percent completion and ugly interception this week were a total fluke. Whisenhunt, you have the next Tom Brady on your hands in Richard Bartel. I can’t believe the Sacramento Mountain Lions ever let him go.

Broncos (Kyle Orton and Tim Tebow), 67 points: It was only a matter of when and how: We all knew eventually Kyle Orton was going to bedshit in the Tim Tebow era. It started with 6:54 left in the first quarter when Orton said to himself, “I know there’s a defensive lineman holding on to my leg, Daniel Fells is covered, and the throw is all the way across my body, but I can squeeze this ball in. What could go wrong?” He could not squeeze that ball in and what went wrong is that the pass was intercepted by Donald Butler. Orton’s decision-making skills and accuracy did not get any better. He went into the locker room at halftime 6-for-13 with 34 passing yards, but he remained the Broncos’ starting quarterback. When he returned for the second half, only two of those three things were still true. The glorious spectacle that is Timothy Richard Tebow took the field, thanks to Kyle Orton.

In the second half, the Denver fans got what they wanted: Tim Tebow behind center. Tebow quickly responded by leading his team to two quick three and outs to start the third quarter. Wait, what? If you missed this game and only saw the highlights, you got the impression that Tebow was running all over the place, making great throws and doing his scream-y butt-slapping thing all over the sidelines, but that was not the case. His debut at QB1 for Denver was pretty underwhelming out of the gate. The fourth quarter is where Tim Tebow shined. Inexplicably, the Chargers defense wasn’t ready for the Tebow-gets-the-snap-in-the-shotgun-and-runs-a-QB-draw play that everyone knew was coming, and he ran for a touchdown, followed by a muscle-flex celebration that had Denver fans all but spelling out “I told you so” with blue and orange T-shirts. What came next was what you saw on SportsCenter: Tebow dumping the ball to Knowshon Moreno for a touchdown, Tebow making a tough throw to Brandon Lloyd to set up a Hail Mary, during which Tebow scrambled around all Tebowish and hurled a ball that seemed destined to find the arms of a Broncos receiver. It did not. Now with the bye week we have even more time to talk all about Tebow’s package. Broncos fans and Denver BQBL owners couldn’t be happier.

Tampa Bay Buccaneers (Josh Freeman, Josh Johnson), 46 points: Heading into San Francisco at 3-1, the Bucs were a sexy “This team is for real this year” pick, and Josh Freeman was being touted as a quarterback you could “believe in.” Freeman supporters, do you believe in throwing for more than 200 yards? Do you believe in throwing less than two picks? Do you believe in scoring, ya know, touchdowns? Then Josh Freeman is not someone you can believe in. At least not based on Week 5. Freeman’s pick-six to start the second quarter was especially bad. He had plenty of time and LeGarrette Blount open in the flat, but he decided to go deeper down the field. He stepped into a throw that wobbled its way into the arms of 49ers cornerback Carlos Rogers for a pick-six. To be fair, Freeman did make an attempt to tackle Rogers on the one-yard line but was tossed aside by a lead blocker like he was a TMZ cameraman and Carlos Rogers was Lady Gaga. Freeman threw six interceptions last year. He has six so far this season. I am sure Bill Barnwell will spin some story about interception regression to the mean and use a three-page formula to prove that Freeman is a decent quarterback. I don’t care what Barnwell’s formulas or Simmons’ man crush says about Josh Freeman. Here is what I know: Josh Freeman could barely lead the Bucs past the Peyton-less Colts, only scored three points against the 49ers, and put up 46 BQBL points. Good news, BQBL Bucs owners: We’re probably about two or three more bad losses away from a Josh Freeman Ybor City DUI.

This week’s Quick Slants are focused on the inner battle being waged in heads and hearts of every football fan, the internal dialogue between “Glass Half-Full Guy” and “Glass Half-Empty Guy.”

Philadelphia Eagles (Michael Vick): 42 points
Glass Half-Full Guy: “In the past two weeks, Vick has thrown for 731 yards and rushed for 165 yards. He has kept the Eagles in every game and hasn’t lost consciousness or torn a three-letter ligament.”
Glass Half-Empty Guy: “Shut up.”
Winner: Glass Half-Empty Guy, obviously.

Atlanta Falcons (Matt Ryan), 26 points:
Glass Half-Full Guy: “Um, let’s see here … He has a cool nickname?”
Glass Half-Empty Guy: “Matt Ryan is an over-hyped QB who peaked his second year in the league. So far this year he has beaten the Philadelphia Eagles and the Seattle Seahawks. Matt Ryan has a 100 percent winning percentage … against teams with avian mascots.”
Winner: Glass Half-Empty Guy. “Ice” is only a cool nickname if you are a West Coast rapper in the late ’80s.

Jacksonville Jaguars (Blaine Gabbert), 15 points:
Glass Half-Full Guy: “Look, his completion rate was over 50 percent, he didn’t throw a pick, and he only fumbled because he wasn’t protected. This Gabbert kid might be the real deal.”
Glass Half-Empty Guy: “Have you seen that Gabbert kid’s hair? He is a garter belt away from looking like he is playing in the Lingerie Football League.”
Winner: Glass Half-Empty Guy. He said “garter belt.”

Minnesota Vikings (Donovan McNabb), 21 points:
Glass Half-Full Guy: “Blowout win, no picks, and Donovan even ran for a touchdown. This glass is all the way full.”
Glass Half-Empty Guy: “Those are all facts. Another fact: The Cardinals are 1-4, had four turnovers, and played a quarterback that the Jacksonville Jaguars cut. I repeat, the Jacksonville Jaguars decided to let this man go because he wasn’t worthy of a roster spot. That is who Donovan and the Vikings blew out.”
Winner: Tie. Actually, no, this is the BQBL. Tie goes to the Glass Half-Empty Guy.

We are so distraught/excited about the end of Tebow Watch that we have decided to replace it with BQBL reader e-mails. Send your thoughts/reactions/analysis/insults/curses to Triangle@grantland.com and we’ll publish some in next week’s scorecard. Until then, keep an eye out for mid-week votes of confidence, quarterback mug shots, and, of course, dong shots.