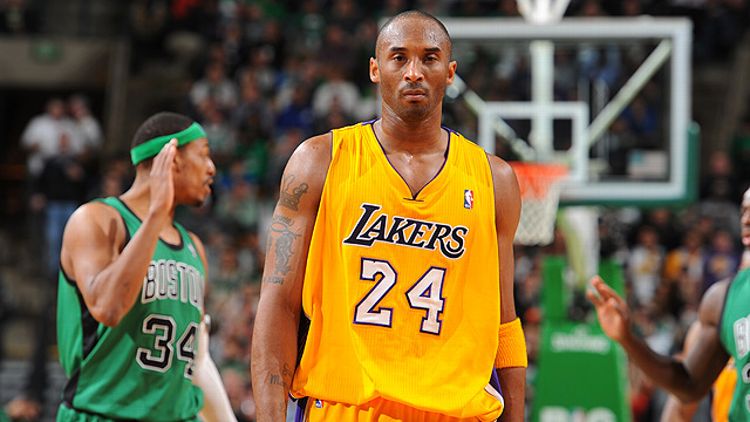 This Bud’s for You

If you fire up the highlights of Thursday night’s Lakers-Celtics overtime clash, you will hear the words, “Mickael Pietrus going to work for the Celtics,” over video of the aforementioned Pietrus attempting what would have been a game-winning 3 and hitting someone eating beer nuts at a bar in Lynnfield. That sort of sums up what we’re dealing with here; not exactly classic material.

The Lakers wound up beating Boston in overtime, 88-87. The most entertaining passage of play was probably when Kevin Garnett long-snapped the ball between his legs to Rajon Rondo, who then hiked it through his own legs to himself. That was the opening tip-off.

Andrew Bynum played like The Thing, hauling in 17 boards to go with 16 points, and earning a postgame embrace from his coach, Mike Brown. It was a grinder’s game, full of collisions and stare-downs. So since this clash between between the two greatest franchises in the history of the league lacked a little pop, it was awfully nice of Kobe Bryant to exude a little star power with his postgame interview.

“I don’t even know what the fuck is going on,” Bryant said. “What the fuck is going on? Who is this kid? I’ve heard about him and stuff like that, but what’s he been doing? Is he getting like triple-doubles or some shit? He’s averaging 28 and eight? No shit. If he’s playing well, I’ll just have to deal with him.”

When asked if he would guard Lin, Kobe gave what might have been the greatest answer to any question ever asked: “Jesus Christ. Let’s not get ahead of ourselves.”

Bryant is asked about the player who has been dominating league headlines for more than a week and he reacts like someone queried him on the minutiae of a Game of Thrones plot point. And this is why Kobe Bryant is the best. He is the worst. But he is also the best.

You know the “Would You Get a Beer With Them” test that politicians face? I would love to get a beer with Kobe Bryant. The only problem is, as soon as we got to whatever bar we were going to, Kobe would be like, “This is what you do for fun? Is this place for fucking real? Is that fucking Superchunk on the jukebox? Is it 1995 or some shit?”

I would happily buy the first round.

Knicks-Lakers are on ESPN tonight. Alternatively, I will probably keep myself amused by seeing if the Heat can score 150 on the Wizards. Also? Clippers-Sixers.

Quote of the Day: Mike D’Antoni

On the hype surrounding Jeremy Lin and whether it’s all warranted (via the New York Daily News’ Frank Isola): “It only took Rudy half a game. Not even half a game, two plays at end and they made a movie about him.”