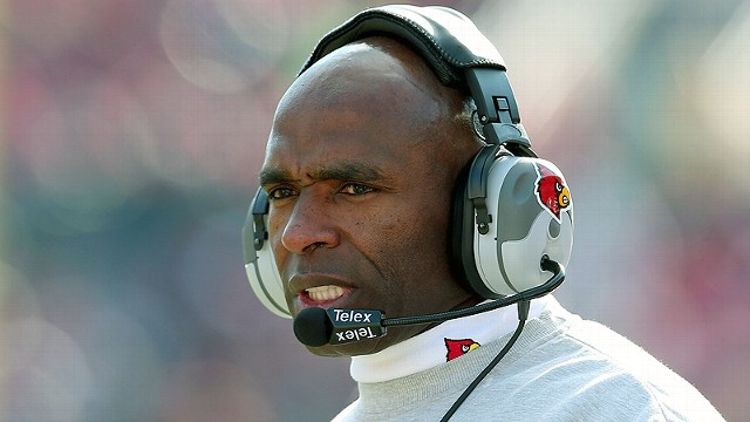 The most interesting thing college football coaches did this month was to stay put. If you believe what you read, Charlie Strong, Mike Gundy, James Franklin, Gary Patterson, and Chris Petersen all had chances to leave their schools for bigger, more storied programs. None of them did. Collectively, they are college football’s new middle class, a well-paid group in no hurry to move.

College football, like America, has its rich and its middle class. Unlike an electrician, of course, a middle-class college football coach makes millions even when he fails. But stick with the analogy for a second.

Take Alabama and Vanderbilt. Bama is a rich school, with lots of national titles (some of them legit) and athletic revenue that last year topped $125 million. Vandy is a middle-class school, and that’s mostly because of its membership in the SEC. “When I took this job in 2003,” Vanderbilt athletic director David Williams said recently, “this was a stepping stone for coaches.”

If Vanderbilt ever found a good football coach, he was underpaid and highly poachable. In 2009, Alabama’s Nick Saban earned $3.9 million (before bonuses) compared to about $1 million for Vanderbilt’s Bobby Johnson. (Vanderbilt is a private school and doesn’t have to release salary information.) Saban and Johnson shared the 2008 SEC Coach of the Year Award.

Two things have happened: First, TV contracts have grown so much that nearly every BCS school has a pot of money. Second, college football continues to distribute that money by conference rather than by team. So when CBS pays the SEC $825 million and when ESPN gives it $2.25 billion, Vandy and Alabama pocket equal shares.

There’s still a significant gap between the two. Using USA Today’s invaluable coaching salary database, we find Saban now makes $5.5 million, while Vanderbilt’s James Franklin makes “approximately $3 million.” But look how the gap between the classes has shrunk. Today, Vandy’s coach makes 55 percent of what Bama’s makes versus 25 percent in 2009. Moreover, the pile of money Franklin takes home has gotten enormous. When Penn State (reportedly) puts out feelers, there’s less of a reason for Franklin to leave.

You see this happening all over college football. Louisville is a classic stepping-stone job — ask Bobby Petrino. Even Charlie Strong complained that the Cardinals’ outstanding 2012 season ended with 10,000 empty seats. “We’re sitting there at [9-1] … and we don’t even pack the stadium,” Strong said. When other schools began to circle him after the season, Strong used coachspeak to say goodbye: “I’m not here to discuss the rumors.”

When Tennessee offered Strong a $3.5 million per year to leave, it seemed like a slam dunk. But then Strong did the math. Louisville was already paying him $2.3 million per year. By turning down the Vols, he could get a new contract that would span eight years. Tennessee may be a “better” job — in terms of seats, Rivals rankings, etc. — but it’s not that much better. Strong stayed at Louisville. “This is a destination place, and that’s what I want it to be,” AD Tom Jurich crowed.

This offseason, Arkansas singlehandedly proved how tough it is to poach a middle-class coach. The Razorbacks’ wish list reportedly included both TCU’s Gary Patterson and Oklahoma State’s Mike Gundy. In previous decades, TCU (Dennis Franchione) and Oklahoma State (Les Miles) are the kind of places you’d go to get a coach. But it’s not so easy anymore. Thanks to mega-donor Boone Pickens, Mike Gundy made $3.2 million this year. TCU paid Patterson $3.5 million. Arkansas gave its eventual hire, Bret Bielema, $3.2 million. Which isn’t much of an incentive to play Miles and Saban every season.

Chris Petersen is paid about $2 million per year at Boise State. Cal, the latest school to try to hire Petersen, paid their former coach Jeff Tedford $2.6 million. Could Cal have come up with a richer deal for Petersen? Sure. Would it have been rich enough to lure him out of Idaho? It seems not. Cal hired Sonny Dykes instead.

This isn’t to say there aren’t vast income disparities in college football. San Jose State’s Mike MacIntyre (salary: $412,000) got a big raise at Colorado. Wisconsin’s Bret Bielema got only a modest raise from Arkansas, but said the Razorbacks could pay more for top assistants. The gap between the richest and poorest FBS schools has grown even bigger. Ten years ago, New Mexico State’s coach made about 15 percent of what Alabama’s coach made. Now, the Aggies’ coach makes about 15 percent of what Vanderbilt’s coach makes.

But the creation of a middle class — one that’s well-paid, insulated from pressure, and in no rush to leave — has interesting effects on the sport. One, it hurts the schools like Tennessee and Arkansas. They’ve lost some of their ability to “money-whip” candidates. The Vols reportedly got turned down by Gundy, Strong, and Jon Gruden before poaching Butch Jones from the Big East.

Good coaches at TCU and Oklahoma State add variety to the postseason. If college football had had a four-team playoff in place, Gary Patterson’s 2010 team and Mike Gundy’s 2011 team probably would have qualified. If Gundy and Patterson think they can win national championships at their current posts — something the expansion of the playoff probably encourages — then there’s even less incentive to leave.

Finally, the rise of the middle-class coach changes the coach’s approach to job-hunting. No longer does he have to machete a Franchione-like path from one college town to the next. No, he simply lets the rumors circulate. He gets nice raises. If, and only if, a really rich school comes calling — Ohio State, Texas, Michigan, et al. — does he think about pulling the trigger. I never thought I’d say this about college football, but score one for income equality.