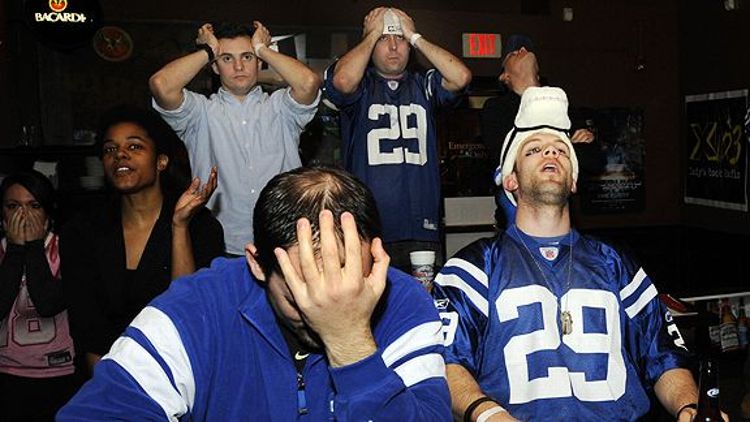 First off, anybody who clicked this blog post is a sick soul who likes to revel in the pain of others. The bad news is, that makes you an emotionally stunted human. The good news is, you’re among friends.

One of our main gambits here at Grantland is to chronicle the misfortune of others, and I like to think we approach the task with just the right amount of glee. How else can you explain the dual act of convening a panel to vote on the city facing the toughest time in sports, and then mocking them? We’re the bad guys in this movie, and there’s no uplifting ending. In fact, the ending is the saddest part of all — the most depressed city. It’s a little like Forrest Gump, if Gump had accidentally fallen into a manhole in the first 20 minutes and the rest of the movie was about Lieutenant Dan getting progressively angrier in a traffic jam.

And now it’s November, which is a sad month in its own right, what with all those turkeys being hunted. So as you might guess, we’re in pretty high spirits.

Here’s how this sucker works. The Grantland literati submit their individual lists. I collect them all in a burlap bag, and tally the totals in a dimly lit dungeon. A first-place vote is worth eight points, a second-place vote is worth seven, and on and on until one. You get it. City with the most points “wins.”

Please note, the committee is concerned with cities that are currently the most depressed. Old demons are relevant only if they haven’t been exorcised, as with the ongoing Chicago Cubs drought. If a long dry spell is broken, à la the Boston Bruins, it ceases to matter.

Last month, the Twin Cities squeaked by Boston. This month, 26 cities were represented in the voting. Undoubtedly, you’ll be wondering why Happy Valley is not among the top finishers. That’s because most of the votes were submitted before the scandal broke. Otherwise, we’d probably be dealing with a very different list.

Let’s get to the good stuff!

Because the Rangers couldn’t take advantage of Playskool Phonegate and they apparently don’t realize that the Stars are actually good — the team has one of the league’s lowest attendance numbers. Come on, Dallas! You have one of the NHL’s best goalies and you also have Jamie Benn! CHEER UP!

I know that when I’m feeling down, I just take the locket out of my shirt and look at the tiny photo of Jamie Benn until I’m back to whistling!

Brewers lose. Good-bye, World Series hopes of Wisconsin residents. So do Russell Wilson and the Badgers. Good-bye, undefeated season. Also: Hello, winter. What a terrible combination. True story: One time, when I was reporting out a story in Madison, my pen froze. That is not an exaggeration.

If you were the kind of person who was into making jokes about someone who TOTALLY understands that you’re kidding and that you admire her talent, etc., you could say something like, “to be fair, that was the best writing she’s ever done.”

There are a lot of corny sports cities in this country, but Jacksonville isn’t corny; it’s just a host. A layover. A temporary residence. The biggest sporting event to hit Jacksonville doesn’t involve a team from Jacksonville (World’s Largest Outdoor Cocktail Party). Blaine Gabbert is basically Curtis Painter with some Pantene conditioner and he’s probably already looking at property off the PCH.

Do you think anyone has told Blaine Gabbert that there has never been a successful QB in the NFL with long hair?

What the f— did I ever do to you guys?

Didn’t I have long hair once? Kinda?

Because the Bruins are sucking it up … and the Pats lost two straight for the first time in ages.

If the Pats pull a Sox in the second half of the season then we’re going to see a lot of people imitating Martin Sheen from The Departed pretty soon.

Meanwhile, I’ll continue imitating Martin Sheen from that West Wing episode where he told off Dr. Jacobs. “Toby? That’s how I beat him.” (Tears, goosebumps, shivers … what were we talking about?)

You might be thinking what I’m thinking, which is that Tennessee is not a city. Well, my friend, you are right. It’s a pretty loose ship we’re running over here.

Chris Johnson has successfully mixed apathy and running the football.

As goes UT so goes the state, and with the loss of Tyler Bray, team is now turning to a true freshman, which if you remember anything about when you were 18, might not be the most reassuring feeling.

Totally true. The most reassuring feeling I had when I was 18 was when I had a few free minutes alone and … well, it doesn’t matter.

We need an NBA season.

Looking at an extended stretch of zero pro sports, depending on the NBA.

True story: Portland got its name when two settlers each wanted to name it after their hometowns, and decided to flip a coin for the honor. One of the settlers was from Portland, Maine. The other? Boston, Mass. Now, imagine the coin had landed the other way, and Portland was called Boston. They could combine into a depressed fan base superpower! Bill Simmons should write an alternate-history novel about this, where Larry Bird becomes Bill Walton or something.

We need an NBA season.

The only place where the lockout has a positive spin. They get an acclimation period for life without basketball.

Sacramento Kings PR Department: Thank you! We’ve been grasping at straws here and — hey, wait a second … that’s not actually positive, is it?

They got to see one Bills win before that long, terrible winter.

Now the Bills are playing well enough that they might not even be able to get Buffalo drunk and steal them away.

At least the Heat can draw attention away from the eyesore that is the Dolphins. Oh wait.

Even the “Suck for Luck” thing didn’t totally work out.

Following fairly stunning ass-whupping of K.C., Fins fans incredulous that Tony Sparano couldn’t even get Suck for Luck right. Actually, strike that — they aren’t surprised at all.

At least he has his dignity, House!

(Speaking of which, House is closer than ever to getting his creep on … )

The Redskins were shut out by the Bills. No, seriously. Read that again.

The Redskins started out OK but are now 1-4 in their last five games, and the city is about to become the epicenter of the worst season there is: primary season.

Cicada season sucks too, though.

The old standby. That radio host’s rant was classic.

Just because Cleveland should always be on this list until they win something, anything. Maybe the city should host a team of professional bingo players.

Colt McCoy has played exactly 16 games as a starter for the Browns & amassed a 5-11 record. On the other hand, have you seen his wife?!?

He’s done it! He got his creep on! The master comes through!

Al Davis is dead. Jason Campbell is hurt. And didn’t Occupy Oakland turn into the worst of the Occupy ___________ protests? That definitely happened, right? (Confession: I stopped paying attention after I learned how many drum circles are involved in these things.)

I would like to invite you to Occupy Chapel Hill, where there are seven tents in front of the post office. And I’m pretty sure it’s a ruse to get free basketball tickets.

A couple of months ago, Al Davis was alive, Moneyball was in theaters, and Jason Campbell was playing like Kenny Stabler. Now Davis is dead, the A’s still play in a concrete mausoleum, and Jason Campbell’s spot got rushed by a guy who was crushing Funyuns on a sectional sofa five weeks ago.

And House On Fire:

The only thing more preposterous than the Carson Palmer deal is the idea of Brad Pitt playing Billy Beane. Even God dislikes the Carson Palmer move — guess who had a (much, much) better passer rating in the Denver game?

You know what this means! New champion this month. Hurrah!

Slight pangs of optimism thanks to Christian Ponder being semi-competent.

That Viking dude with the motorcycle is considering selling his season tickets.

He wants to buy a longship and attack the coast of Ireland.

The new kings of sadness! Simmons strikes a cautious tone:

Properly sucking for Luck. I hesitated to even include them.

Only because the Peyton/Luck situation is going to be pretty ugly.

I feel like Curtis Painter’s hair is really adding insult to neck injury at this point. Can’t believe there hasn’t been a free-association prose poetry Irsay tweet about this yet. I know Jim Caldwell is about as expressive as an Easter Island statue, but I’d really love to know how he feels about a guy with Sons Of Anarchy hair burying his head coaching career.

I find Chris Ryan hysterical, and yet I’m wary of anyone who shares my last name because I’ve had such bad experiences with my family. A real conundrum.

The only way to end this, of course, is with House. So far he’s been funny, insightful, and unsettling. How’s he going to close it out?

Can’t be no. 1, the Colts have been extraordinary at Sucking for Luck. I mean, three straight losses by at least 17 points including 62-7 in front of a national Sunday night audience is irrefutably terrific sucking.

Right back to unsettling! See you in December for some holiday depression.

Eds. note: This post has been updated to remove House’s line about Oakland from the “Best Lines About a City That Didn’t Qualify” section, because, you know, they did qualify. Sorry, Oakland!