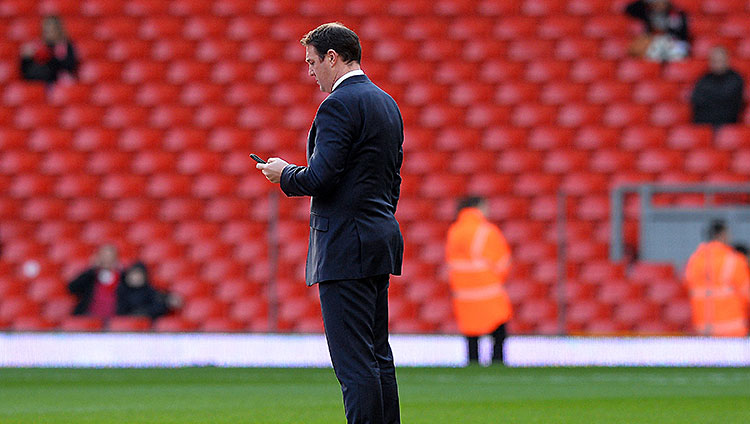 A few days ago, the contents of two letters sent to the English Football Association — detailing offensive text messages between Malcolm “Malky” Mackay and Crystal Palace executive Iain Moody — hit the news. The inflammatory nature of the texts throws Crystal Palace’s already rocky season into a chaotic jumble and threatens the future employment prospects of Mackay and Moody. It is a ragged and roiling shit show. So, let’s talk about it.

Who is Malky Mackay?

Mackay is a manager and a former defender in the Scottish Premier League, English Premier League, and Football League Championship. He is as Scottish as the day is long. Mackay was last seen patrolling the technical area for Cardiff City, but was fired in December 2013 after clashing with team owner Vincent Tan. It was a shocking development at the time considering Mackay had steered the team to promotion after 50-something years of toiling in lower-league purgatory.

Tan, Malaysia’s 10th-richest man, gained control of Cardiff City after buying 36.1 percent of the club in 2010. As incoming owners are wont to do, Tan made certain noises about refurbishing Cardiff’s stadium, investing in the team, and, oh, I don’t know, maybe changing a few little details like the name of the club, its crest, and its colors. 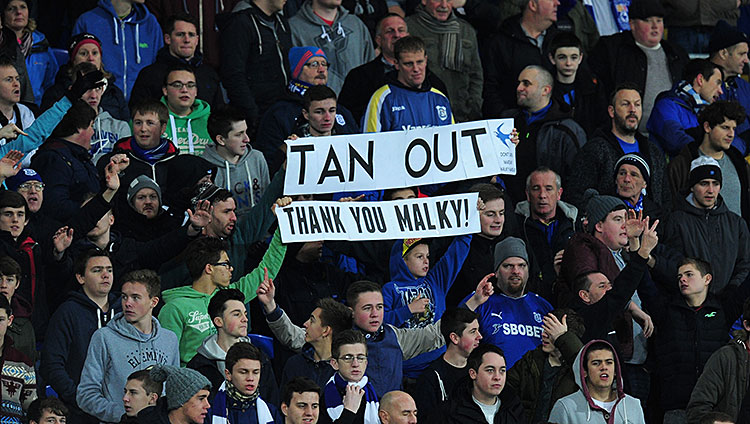 Now, changing the name, crest, and colors of a club that was founded in 1899 is not a thing to be done lightly. Cardiff played in home blues, was known colloquially as the Bluebirds, and had a Vale of Arryn–esque bluebird soaring on its crest. That’s the way things were for as long as anyone could remember.

Well, here comes Tan from no-one-knows Malaysia, rebranding Cardiff’s colors from blue to red (“a more marketable color in Asia,” it was whispered) and placing a rampant red dragon, front and center, on the club’s redesigned badge (a creature with “significance in the far east” one site noted, as if Tan had put a set of chopsticks on the badge).

Though Tan later denied he was planning to change the name from Cardiff City FC to the Cardiff Dragons, fans were, it’s fair to say, fucking irate. Many, if not all, of Cardiff’s fans wanted Tan out. And, really, who could blame them? 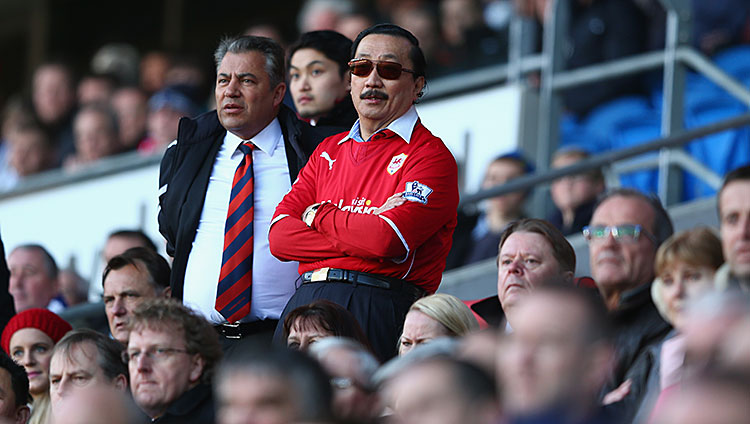 Of course, that Tan is a foreigner added no small amount of nativism to the discourse surrounding his ownership of the team. Not helping matters was Tan’s penchant for blacker-than-black illegal arms dealer–style sunglasses and the slick-as-hell look of tucking his red Cardiff home kit — worn over a starched-collar long-sleeve button-up shirt — into black slacks, pulled up half-a-hand’s length past his belly button like a villain from one of the Hangover sequels.

And so Cardiff looked to a 2013-14 Premier League season increasingly backlit by the glow of its fans’ torches and the glint of their pitchforks.

This is where, stage left, enters one Iain Moody into our increasingly sordid tale. Moody was Cardiff’s head of recruitment. As such, it was his responsibility to stock the team with talent for the upcoming season. Moody did his job with alacrity, acquiring eight players for a total price of about £50 million. Tan felt the price tag was several millions more than those players were actually worth and, on top of that, exceeded Cardiff’s internal transfer budget for the season. He was not pleased.

With great splashing of cash comes great responsibility. Tan demanded results. When those results did not arrive in the form of points, and with Cardiff lurking uncomfortably close to the relegation hellmouth, Tan canned Moody and, two months later, after initially seeming to support him, then not support him, then support him again, axed Mackay.

Mackay strenuously — which, let’s face it, is the only way to ever deny something — denied that Moody had ever gone over budget, and he filed a £7.5 million wrongful termination suit against Tan. By May, Mackay and Cardiff had reached an undisclosed settlement, the suit was dropped, and Mackay offered his “unreserved apology.”

That apology, after months and weeks of fervently shoveling out the grave on the sunny side of the hill upon which he had once seemed determined to die, seemed a tad too groveling at the time, but nothing much beyond that was thought about it.

As all of this was going on, it’s fair to say that literally no one in the world, with the exception of Tan’s loved ones (and even then, who knows), was #TeamTan. He was labeled THE WORST OWNER IN THE WORLD by essentially everyone. After all, in addition to his callous disregard for more than a century of club history, his alleged lineup meddling, his replacing of Moody with a 23-year-old son of a friend, and his generally aggressive non-European-ness, Tan didn’t know jack-all about the sport besides, maybe, that it involved a lot of kicking and running around.

From the August 17, 2013, issue of The Guardian: “‘He doesn’t know any rules about football,’ Al Chuah, the managing director of one of Tan’s many companies, said before breaking into laughter. ‘He invested in pharmacy without realising what drugs are all about.'”

How does that get us to text messages?

Tan may not know football, but he does know, as does anyone who can easily write a check with more than four zeros, how to hire lawyers. He had, at some unknown point between his initial objections to Moody’s alleged profligacy and the settlement of Mackay’s suit, enlisted international law firm Mishcon de Reya to investigate his suspicions into Moody’s (again, alleged) transfer-market misdeeds.

In March, Mishcon de Reya obtained a search warrant and raided Moody’s home. Investigators seized an unknown number of computers and cell phones. Moody, by this time, was sporting director of Crystal Palace. When Palace abruptly parted ways with the Belichick-ian manager Tony Pulis mere days before the start of this season, Mackay seemed the obvious choice to replace him.

That is until news broke this week that the Premier League had found Crystal Palace to have been in breach of Rule B16 for failing to act in good faith, stemming from the events before an April match against Cardiff City. Moody, the Premier League found, had attempted to leverage his contacts at Cardiff to glean information about Cardiff’s lineup for the upcoming game.

This put Moody’s position at Palace in a somewhat fraught state, and negotiations with Mackay were broken off.

Two days later, the text messages discovered during the search of Moody’s home hit the news.

(Faint-of-heart warning: These get pretty real.)

• In reference to South Korean international Kim Bo-kyung after he was signed by Cardiff City: “Fkn chinkys” and “Fk it. There’s enough dogs in Cardiff for us all to go around.”

• In reference to prominent player agent Phil Smith: “‘Go on, fat Phil. Nothing like a Jew that sees money slipping through his fingers.”

• In reference to an unnamed French player: “[he] struck me as an independently minded young homo.”

• An unnamed executive at another club was named as someone “not to be trusted” as he was a “gay snake” and “the homo.”

• In texts to another unnamed player, who employed a female agent: “I bet you’d love a bounce on her falsies.”

• In reference to an unnamed agent who apparently represents a number of players of African descent: “he needs to rename his agency the All Blacks” (clever!) and “Not many white faces amongst that lot but worth considering.”

• A picture titled “Black Monopoly” is sent. Every square on the board reads “go to jail.”

So! [Claps hands together and rubs.] There it is! All Mackay and Moody were missing were Catholics, and they would’ve hit for the intolerance cycle.

Moody has resigned from Crystal Palace and Mackay is still nobody’s manager. For his part, McKay apologized for sending texts that “disrespected other cultures,” a statement that not only severely underrates the number of cultures he disrespected but labels women as being of some separate exotic culture.

The apology was released via the League Managers Association, which, adding to the long and ignominious history of “if anyone was offended” non-apology apologies, sayeth, in part: “These were two text messages sent in private at a time Malky felt under great pressure and when he was letting off steam to a friend during some friendly text message banter. That said, Malky believes he could and should have conducted himself better on these two isolated occasions. If Malky has caused any offence by these two isolated matters he would, however, wish to sincerely apologise.”

In other words: “Just a bit of banter now, innut Luv?”1

As for the original clash over the price of Moody’s player buys while at Cardiff: The FA is expected to investigate.

Do You Believe in Quarterback Miracles?