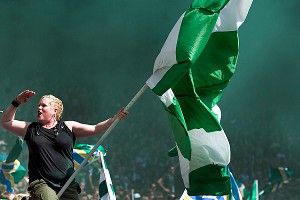 On August 26, 14,121 spectators watched the Portland Timbers fall 3-1 to the San Jose Earthquakes. In itself, that figure is unremarkable. Average attendance at Major League Soccer games this season is nearly 19,000 per game, more than the NBA and the NHL. But this wasn’t a regular fixture. Thirty-two-year-old Turkish forward Sercan Guvenisik — hardly a household name, even for the most die-hard American soccer fan — scored three goals for the Quakes. Nine players who participated weren’t signed to either MLS team. In fact, the game between the two teams that counted in the MLS standings took place the previous evening when Portland defeated the Vancouver Whitecaps, 2-1. The match on the 26th was barely more than a formal practice. It was a Reserve League game. Think preseason American football where the scrubs and the young guys fighting for spots get looks. And yet, more people turned out than arrive to watch full-team matches at New England and Chivas USA. Welcome to soccer-crazy Rose City.

The league-wide function of the reserve games is to find minutes for up-and-coming players and, occasionally, first teamers returning from injury. Clubs use, at most, 14 guys per game so there’s little opportunity for players further down the depth chart to get on the field during normal games. From the supporter side, it can be nearly impossible to score tickets to MLS games at JELD-WEN Field. The Timbers’ 20,438-capacity home stadium sees a sellout every time the second-year MLS franchise with a long history takes the field.

In Portland, attending a reserve league game means seeing 19-year-old potential American star Charles Renken and the brilliant Colombian 18-year-old Sebastian Rincón. Hometown favorite, Brent Richards, a 22-year-old forward who starred for the University of Washington and the Timbers U-23 squad before signing as senior side’s first homegrown player in January, is also a fixture. “We have a knowledgeable fan base and they know the quality that can come up through the reserves. I mean, Brent Richards is already a hero, and he’s played what, a whole 45 minutes this year?” Fernando Machicado, who chairs the Game Day Ops and the Merchandise Committee for the Timbers Army, says. (Actually, it’s closer to 200 minutes, but point taken.)

The excitement for the final reserve match of the year, played on Sunday after the nationally televised fixture between the Timbers and the hated Seattle Sounders, revolved around the possible appearance of Colombian Designated Player Jose Adolfo Valencia, who hasn’t played after undergoing preseason knee surgery. Nearly 9,000 watched “Trencito,” as Valencia is known, play for 20 minutes. Richards scored, too. The reserve team ended their season with a 3-2 victory, averaging 8,200 fans per game over the 10-game season.

Perhaps the most remarkable thing about the support the Timbers reserves receive is that Machicado and the rest of the Timbers Army — the die-hard supporters section known for nonstop chanting and massive tifos — put little effort into rallying the troops. “We literally don’t do anything. It’s all organic in its entirety. I’m pretty amazed at how it has all worked out myself,” Timber Army communications chief Garrett Dittfurth says.

The crowd at reserve matches differs from the one at an MLS match. JELD-WEN, named for the building materials manufacturer founded in Oregon, is family-friendly on all occasions, but the reserve games offer an excellent and cheap introduction to the venue, the sport, and the team for Portlanders who haven’t been before. (Tickets cost $5 for season-ticket holders and $10 for the general public.) “It’s the city that comes to reserve matches, not the Timbers Army. But that’s great,” says Bruce “Obi” Eaton, Timbers Army die-hard. Timbers Chief Operating Officer Mike Golub says local companies often want to buy large blocks of tickets for Timbers matches. He can’t accommodate them due to ticket demand — there are 7,500 people on the season-ticket waiting list — but reserve match games offer another option.

Machicado estimates the noise level and intensity at reserve matches is about 30 percent of the real thing, but it does help the players anticipate the noise and support they will experience when they reach the full MLS club. “It prepares you in a way because it’s like the first team. It’s definitely different no matter what, but it’s a good step for the club and a nice step for me,” says backup goalkeeper Joe Bendik. (A Groupon for a recent reserve game dramatically advertised Bendik as the netminder “who guards the net from precisely aimed balls and extremely lost helicopters.” Nearly 500 people purchased the $14 Groupon deals.)

The Timbers staff operates the games as full first-team ones, however, meaning concessions are open. As Machicado notes, there are some advantages to the relaxed atmosphere: “Beers are half-price. So that’s a good deal.” The reserve matches serve as a revenue-generator for the Timbers. “We’re able to break even and then some on reserve games with the kind of crowds we’re getting,” Golub says.

That’s a positive sign for the Timbers. JELD-WEN, a converted minor league ballpark, cannot increase capacity. Furthermore, the second-year expansion club sits tied for last place in the Western Conference, and owner Merritt Paulson recently announced that season ticket prices would not increase due to the club’s struggles. The move makes sense for the long-term viability of the franchise and the team-fan relationship, but it’s tough on the short-term bottom line. Turning a profit on reserve league games, which already serve to recruit new fans, helps the bottom line (if only a little bit).

The rabid fan base cannot be replicated across the country, but there are lessons about giving a first-team feel to the reserve league that might be transferred to other MLS franchises. “I think clearly what’s going on in Portland shows what the reserve league’s potential is,” MLS President Mark Abbott says. For most teams, it will take a long time to reach that potential, if they ever do, but, Abbott says it’s undeniable that there’s something special going on in Timbers Nation: “They have had some decent draws up in Seattle and occasionally in some other places, but nothing like we’re seeing here in Portland.”

The team’s passionate, growing fan base wouldn’t have it any other way. Neither would the club’s management.