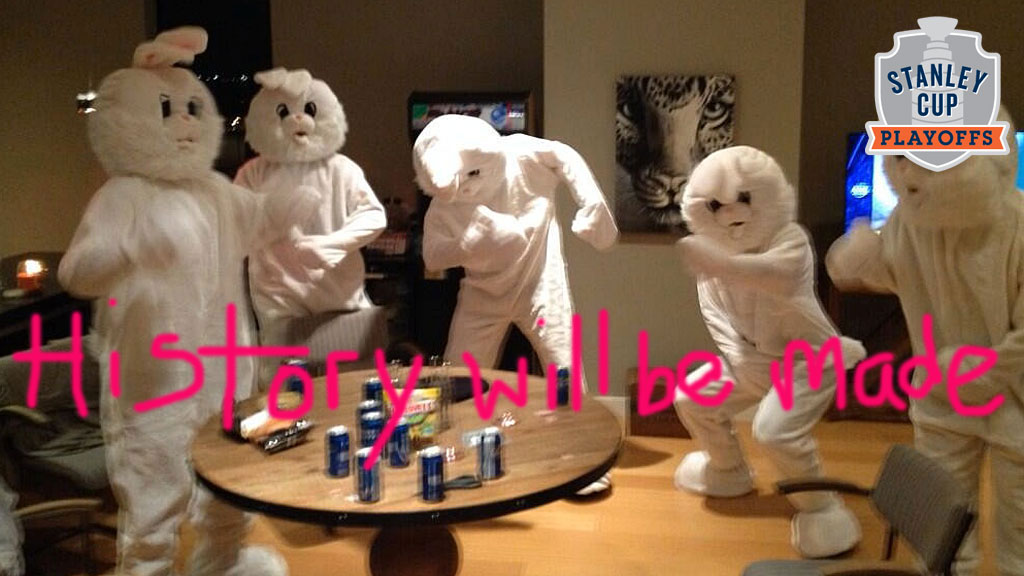 These bros are A+ goofballs. Their star player eats a grilled cheese sandwich before every game. Here is a Very Flyers Christmas Eve special, which includes the following hot cooking tip from culinary mastermind Matt Read: “We’re not eating the butter here. We’re just putting a whole stick in there.”

Pictured above are Flyers players at Halloween last year, dressed up like freaking nutbars, and dancing (?) alone in a room full of empties. That’s a leopard painting on the wall back there, I think? Very cool, guys.

Today we learned that the Flyers, who recovered from the tire-fire start to earn a spot in the postseason, are in peak Flyer form going into the playoffs, by which I mean two of them — redheads Jakub Voracek and Scott Hartnell — have dyed their beards black, and the team is rocking matching “STARTED FROM THE BOTTOM” T-shirts. Because it’s the Cup, or whatever.

Here's the best I could do snapping a pic of Hartnell's dyed beard! pic.twitter.com/wW7cJyVuXY

And for comparison's sake, here's what I was able to get of Jake Voracek's dye job pic.twitter.com/YRIaKQnXC0

“Jake’s beard … Um, I don’t know if I should comment on that,” said Wayne Simmonds, seen here, dunking. “It’s pretty ugly. What’s bad is it’s contrasting styles. He’s got the gold/ginger locks and the black beard.

“We’ll call him Black Beard from now on, I guess. He looks like a pirate.”

Perfect. The best part of this is obviously that the Philadelphia Flyers were pretty firmly Team Pirate already. The second-best part (as some people are already pointing out) is that Voracek’s and Hartnell’s beards will continue to grow, I guess, at which point they’ll have two-toned facial hair? Who knows. I want them to advance, just to see the next beard move. Anything can happen in the playoffs, guys.

There’s a lot of great hockey on tonight — the Sharks meet the Kings, the Blues face the defending-champion Blackhawks — but I’ll also be watching my favorite hooligans from Philadelphia. (In case you were wondering, they play the Rangers at 7 p.m. EST. Sorry, Rangers. Next time do something weird, and I’ll write a post about you instead. I mean besides this.) Crush it, Philly. I have never rooted for you more than I am at this moment.

It’s Time for True Seeding in the NBA Playoffs

At Least the Knicks Won the Regular-Season Championship Belt