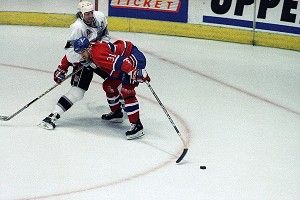 With Thursday night’s 2-1 win over the Phoenix Coyotes, the L.A. Kings, hockey’s most emphatic playoff team, sit just one win away from a trip to the Stanley Cup Finals. Barring a catastrophic meltdown, it would be the team’s first appearance in the Finals since 1993, a year when Wayne Gretzky was on the ice, Barry Melrose was behind the bench, and Nancy Reagan, John Candy, and Goldie Hawn were in the stands.

The Kings lost the Cup in five games to the Montreal Canadiens, an outcome that scans as definitive yet had seemed quite unimaginable in the third period of Game 2. Up 2-1 late in the third, the Kings were less than two minutes away from returning to Los Angeles with a 2-0 series lead. The whistle was blown, and the Kings’ Marty McSorley was called over.

It was far from the first time McSorley had been beckoned by an official. Able to break a nose or score a goal, instigate contact or deter it, he was the kind of guy well-suited to be on the ice with a commodity like Gretzky — so well-suited, in fact, that Gretzky had requested he be involved in “The Trade,” which brought him from the Edmonton Oilers to Los Angeles in 1988.

“This alleged throw-in from the Wayne Gretzky trade has been playing some of the best hockey of his career,” the L.A. Times’ Lisa Dillman wrote in a piece that ran the morning of Game 2, before quoting Melrose. “He has turned into an unbelievable leader for us,” Melrose said. “On the bench, he is unbelievable. What Marty does, it doesn’t always show up on the scoreboard.”

Referee Kerry Fraser had worked during the L.A. Kings’ previous series, a seven-gamer against the Toronto Maple Leafs that was marred by his missed whistle of a Gretzky high stick on Doug Gilmour. (That blown call is so perversely clung to in Toronto that we still get headlines like “Kerry Fraser reflects on 18th anniversary of missing Wayne Gretzky’s high-stick of Doug Gilmour” and “peace be with you” pleas by Fraser.) Now, several games later, he was holding up a different stick, McSorley’s, at the behest of Canadiens coach Jacques Demers.

As Demers tells it, two of his players, Guy Carbonneau and Kirk Muller, had noticed that McSorley’s stick had a more wicked curve than most — not an unusual practice, but an illegal one. “The two teams had their sticks in the hallway, so we saw it there and we saw it on the ice,” he told USA Today in 2006. “We told them not to say anything and we checked it out and he came back with the same kind of stick in Game 2.”

To those in and around L.A., just what Demers meant by “checked it out” remains open to conspiracy (fueled in part by a 2001 article that made no mention of anyone having seen the sticks in the hallway.) Kings broadcaster Jim Fox has alluded to someone “on the inside” who was familiar with the curvature of which Kings’ sticks. ESPN.com writer Scott Burnside, discussing the mysterious sandy substance that ended up on the skates of Philadelphia Flyers during their 2010 playoff matchup against Montreal, recalled the spectre of locker room sabotage from decades before. “Some of the reporters who covered the 1993 Stanley Cup finals between Montreal and the Los Angeles Kings remember rumors of the Canadiens somehow knowing which of the Kings’ sticks might have been illegal,” he mused. “Did someone sneak into the Kings’ dressing room and measure the sticks?”

And on the occasion of his Hall of Fame induction, former L.A. King (and current team executive) Luc Robitaille spoke of shady dealings. “I don’t think they were flying blind, but I don’t think anyone will ever admit to it,” he said. “Actually, there are a couple people that told me throughout time that it wasn’t blind. But there’s been a lot of water under the bridge, and I actually know for a fact it wasn’t blind, but that’s the way it goes … bad memories there.”

Perhaps he was referring at least in part to a story he told the L.A. Daily News in 2003. “I’m in Montreal’s new arena and this policeman comes up to me,” Robitaille said then. “He said ‘To this day, I feel so bad. You know, they measured your sticks between periods and before games.’ … This guy told me that a trainer, or somebody from the Montreal team, told him to look the other way while he measured our sticks.”

At any rate, through whatever choice methods, the Canadiens busted the right guy. McSorley was sent to the penalty box, and you don’t have to know what happened to know what happened: Montreal pulled Patrick Roy, tied the game on the resulting 6-on-4, and then scored again shortly into overtime for the 3-2 win. It was enough for “McSorley’s Illegal Stick” to constitute one of the Canadiens’ “Greatest Moments.”

(As for great moments, one of them has to be E.M. Swift’s description in Sports Illustrated of Melrose after the game: “‘Barry Melrose wouldn’t have made that call,’ Melrose claimed, smugly sanctimonious in defeat. ‘I don’t believe in winning like that.'”)

Eric Desjardins scored both goals to complete the first-ever Stanley Cup Finals hat trick by a defenseman. The Habs went on to win Games 3 and 4 in overtime before returning to the scene of the crime, as it were, and hoisting the Cup.

It was the last time a Canadian team has done so. Five times since 1993, teams from north of the border have made it to the Stanley Cup Finals, and five times they have failed, enough instances to officially render a curse out of a coincidence.

The Vancouver Canucks lost in seven games twice, to the Rangers in 1994 and last year to the Bruins. The Calgary Flames, Edmonton Oilers, and Ottawa Senators appeared in the finals in three consecutive seasons, but each time they were felled not only by an American team but by a dreaded Sun Belt-y expansion-era franchise: the Tampa Bay Lightning, the Carolina Hurricanes, and the Anaheim Ducks, respectively.

As if sensing danger, the Quebec Nordiques packed up and moved to the U.S. in 1995. They won a Cup the very next season. (The Winnipeg Jets weren’t so lucky upon their relocation to Phoenix, but there’s a curse-based reason for that: The Coyotes former owner, Gretzky, also owns the restaurant in Toronto where, against the best attempts of the Hockey Hall of Fame, the cursed stick is said to be held.

Still, as with many supernatural stories, the once lighthearted narrative has darkened: McSorley’s two-handed slash to the head of Donald Brashear in a Bruins-Canucks game in 2000 effectively ended his playing career. Try Googling for information about Marty McSorley stick and you’ll find, along articles discussing the curse, headlines like “McSorley found guilty of assault, avoids jail time”, and NHL players quoted as saying “[McSorley] should be treated the same as if he tried to kill a guy on the street.” Marty McSorley is only known for a handful of things, and two of them involve illegal sticks.

It’s unclear what it might take to undo the curse’s effects. According to Demers, he and McSorley shook hands over the whole thing the year after it happened. An article written in 2001, when the Kings finally snapped a 14-game playoff losing streak, declared that “The Curse of Marty McSorley finally has been broken,” though that seemed to misinterpret the true target of the pox. The closest we might be to the answer is this offhand L.A. Times charticle comparing McSorley to Lord Voldemort. After all, it makes a good point: one has a bent wand, and one has a curved — and cursed — stick.