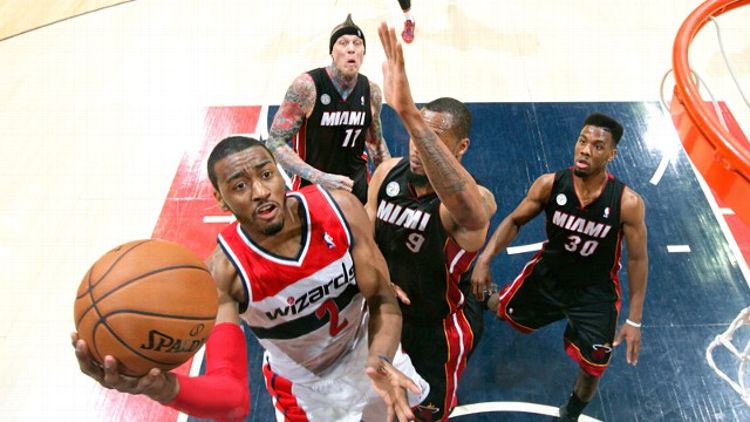 After being instantly dismissed from the national consciousness following a dreadful 4-28 start, few people noticed when the Washington Wizards quietly showed signs of a promising future during the second half of this past season. The Wizards’ improved play coincided with the return of John Wall, whose knee injury had kept him in street clothes through early January. With their promising young point guard back in the fold, the team morphed from disaster to, dare I say it, playoff-caliber force almost overnight.

Washington finished out the season at a .500 clip upon Wall’s return, which hardly screams “elite.” But the 25 games featuring a healthy core of Wall, rookie guard Bradley Beal, and veteran wing Martell Webster (whom the team intends to bring back despite his free-agent status) certainly do. No matter what roles Wall or Beal played (both came off the bench for a few games), the Wizards posted a point differential of plus-4.84, the equivalent of a 55-win team over a full season. And though a 25-game stretch isn’t something Washington can hang its hat on, it’s certainly an encouraging sign. That trio, combined with Nene and Emeka Okafor, also combined to form the league’s most effective five-man unit that played at least 140 minutes together, per NBA.com. That amount of playing time isn’t enough to produce ironclad proof that the Wizards are set to the rule the basketball world, but it certainly is enough time to suggest that’s a lineup that can be quite effective.

For a franchise that’s been toiling in mediocrity for decades, there are enough bright spots from last year to suggest Washington is poised to make some serious noise in the Eastern Conference if it can inject one more talented piece into its core (and stay relatively healthy), a real possibility thanks to some incredible lottery luck. By selecting the right player with the third overall pick, the Wizards can become a legitimate contender in the East as early as next year, something no one could have predicted six months ago. Unlike some of the more desperate teams, Washington doesn’t necessarily need to hit a home run at the top of the draft, but to break through from mid-standings irrelevance, the Wizards probably have to avoid coming up empty. If the team can get an impact player with the third pick while also finding a competent backup point guard with one of its second-round picks, the Wizards have the opportunity to completely change the course of their franchise. No pressure, right?

The Wizards aren’t the only team facing a crucial draft, either. These three teams also stand to benefit from finding a reliable piece on Thursday night.

The Kevin Love watch is officially in full swing, and new Timberwolves GM Flip Saunders must do everything he can to get his star forward into the playoffs. Last year, the team was hit hard by injuries — including two different ones suffered by Love — and limped through the year en route to a disappointing finish. The Wolves should expect to improve simply by a return to health from a number of their core players, but they still need to address some flaws on their quirky roster.

The problem for Minnesota is their current cap situation. Assuming they re-sign center Nikola Pekovic, Minnesota will be left with little flexibility to bring in players via free agency. For the team to take a step forward next season, the draft is going to have to produce some valuable (and cheap) rotation players. Saunders has two first-round picks (nos. 9 and 26) as well as two late second-round choices (nos. 52 and 59) at his disposal, and badly needs to add wing depth and shooting to a roster severely lacking both.

With a number of interesting trade chips, don’t be surprised to see some, or all, of those picks packaged with veterans like Luke Ridnour or the disappointing Derrick Williams in an attempt to bring more balance to a roster heavy on power forwards and ball handlers. Still, it may be in Minnesota’s best interest financially to stay in the draft. The new CBA makes first-round contracts so valuable that selecting even one viable rotation player at either no. 9 or no. 26 would give the Wolves a lot more flexibility in the future. But that approach relies on the fickle nature of the draft, and if Minnesota whiffs with its selections, it could accelerate the departure of the team’s star forward.

In case you haven’t noticed, that Kyrie Irving fella is quite good. The dynamic young point guard is ready to be the offensive focal point of a contending team right now, but he needs help in Cleveland. After failing to land elite talent with their picks in the past two drafts — Tristan Thompson is a nice, improving power forward, and guard Dion Waiters left a lot to be desired after his inaugural NBA season — Cleveland needs to use its four picks in 2013 to stockpile some talent around Irving before a string of losing seasons takes a toll on his game and habits.

That doesn’t mean that the Cavs necessarily need to draft players with those picks, as the no. 1 overall selection, 19th overall pick, and even their two high second-round picks have a lot of trade value. Cleveland’s front office just needs to make sure that however those picks are used (along with their loads of cap space), they add players that complement their budding superstar and also provide quality depth for their frontcourt. The latter might be the most vital task, as injuries to defensive ace Anderson Varejao derailed any hopes for the Cavs to be competitive in previous seasons.

Speaking of stars who may soon want out of their current digs, Portland forward LaMarcus Aldridge has just two years left on his contract and a desire to play for a playoff team. And Aldridge isn’t alone. Rugged shooting guard Wes Matthews may also become expendable if the Trail Blazers don’t improve a dreadful bench that cost them a real shot at a playoff berth this past season. The team has cap space to bring players in via free agency, but at most, it’s enough to sign a second-tier free agent like Pekovic or Utah’s Paul Millsap. And that’s assuming management doesn’t decide to bring back restricted free agent Eric Maynor.

No matter how its free-agent moves pan out, Portland faces a lot of pressure to find some viable rotation players in this draft. The team has only one first-round pick, 10th overall, but it does have three second-round selections (39, 40, and 45) that it can hopefully use to mine some talent later in the draft. If it can’t find productive bench players, Portland will be forced to use valuable cap space in the future on mid-level free agents in an attempt to fill out their reserve units. Deals like that are among the least valuable in the new economic climate of the NBA and typically end up being given to players who don’t move the needle much. If the Trail Blazers are to make the playoffs in an increasingly competitive Western Conference anytime soon, this draft will have a lot to say about it.

Screws, Forks, and the Eephus: A Tribute to MLB's Freak Pitches