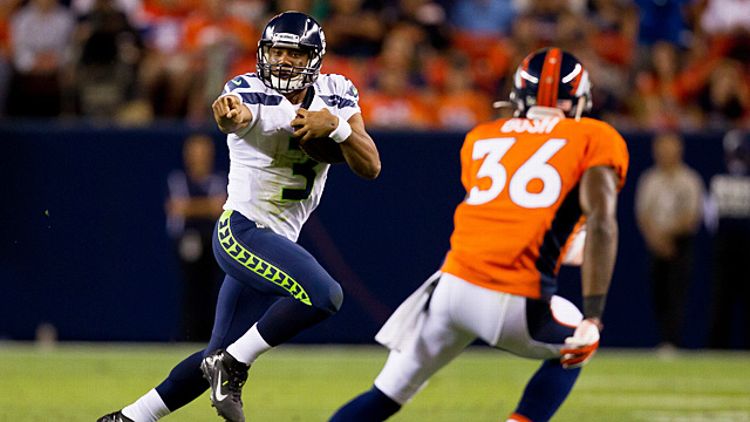 OK, that might be a bit premature, but at least for now, Russell Wilson is the starting quarterback in Seattle. If Wilson does end up winning the starting job for the Seahawks, it seems easy to laugh about the money the team shelled out for Flynn this offseason only to sit him on the bench. The problem is, it’s tough to blame them. Seattle clearly needed an upgrade at quarterback, and although there was a risk in assuming it was Flynn and his short résumé, there weren’t a ton of options.

The takeaway from this probably isn’t that the Seahawks made a mistake with Flynn, but that they might’ve found a gem in Wilson. As the shotgun permeates the NFL, the dismissal of short quarterbacks will lessen. Wilson is maybe 5-foot-10, but throughout his entire career, he’s shown an ability to create, and it’s been with his arm far more often than he’s given credit for. There were about 10 million guaranteed reasons the Flynn signing was risky. There were next to none in drafting Wilson in the third round. We’ll see if that’s the choice that eventually brings the reward.

Someone should tell the Eagles these games don’t count

The Eagles played the Patriots on Monday Night Football last night, and, well, it wasn’t all that awesome for people who like the Eagles. One of those people is Chris Ryan, who’s already made the point today that it might be time to let Michael Vick take a breather from all this preseason nonsense.

After getting Jermaine Cunningham’s helmet in the left side of his ribcage last night, Vick was helped off the field with Philly’s training staff and had X-rays taken (the results were negative). It should be noted that Tom Brady, who has been hurt exactly once in his career, was nowhere near the field last night while Vick, who we’ll kindly say is prone to injury, was racking up the first-team snaps for the Eagles. Nick Foles looked good again in relief, but Michael Vick is still Michael Vick, and until the league allows him to rock the red practice jersey in preseason games, it might be time to shut it down.

To go along with that fun little problem, Andy Reid, who’s lost autonomy over his mustache (seriously, it’s learning), got into a screaming match with his team’s very expensive defensive tackle, Cullen Jenkins. Reid explained today that the confrontation was a result of his disappointment in the first team’s effort against Ryan Mallett and the boys. These things happen, and from Reid’s response, it sounds like it’s more a product of his respect for Jenkins as a defensive leader than anything else. Still, there are better results Philly could have asked for from a meaningless night in mid-August.

To go along with having two quarterbacks who aren’t very good, the Jets have an offensive line that’s having trouble blocking anyone. Most of it has been laid at the feet of right tackle Wayne Hunter, who had been expected to return as the starter. With all Hunter’s recent trouble, Rex Ryan came out yesterday and said that he hasn’t committed to a starter on the right side. He also acknowledged that the Jets’ offensive problems are more pervasive than one position.

“We’ve got to get better, and it’s not just Wayne Hunter,” Ryan said. “All of us across the board have got to pick our game up.”

Warning: Playing football with Tony Romo may be hazardous to your health

Apparently, being a guy who catches passes from Tony Romo is pretty much the same as being in a Final Destination movie. The news out of Cowboys camp today is that Dez Bryant has been diagnosed with patellar tendinitis, which will require extended rest. Jason Witten is already out for the entire preseason with a lacerated spleen and could miss a significant amount of time. Miles Austin and his hamstrings will miss the entire preseason in an effort to keep him (and them) healthy come September.

Neither Austin nor Bryant’s ailments are particularly troubling, but combined with a starting running back with one heck of an injury history and a backup who’s no stranger to the injury report, it’s not a great situation for Romo and the Cowboys. For now, it looks like a steady diet of Kevin Ogletree, who should be seriously careful.

S-A-C-K: Why Pass Protection Might Be the Jets' Biggest Problem