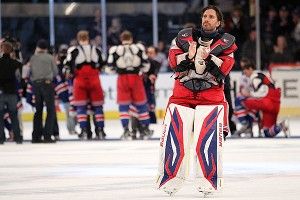 Ground down, sore on Saturday night when the regular season ends. Ready to explode Wednesday as the playoffs begin. It’s the miracle of April.

When playoff energy returns, defense returns. Shooters get harassed and forced to bad angles; rebounds are cleared. Great chances become good chances that good goalies can stop. Every goal not scored seems bigger. Every save made seems better. It’s a goalie’s time of year.

You have to like attention to be a goalie. You have to want to be a hero. In the playoffs, you have your chance. You’re playing better than you’ve ever played, in games more important than you’ve ever been in. You can suddenly feel a wave build beneath you. A save, another, the noise of the crowd. You feel good. You feel great.

Reporters are all around you; on the street, everybody knows. Your world filled with smiling faces. Into the next game, and into the next. Bruises and fatigue survive until the puck drops. The wave builds. No time to think, to doubt. This is fun.

A bad goal, a bad game — they still have to win four. Nothing can bring you down. During the regular season, your coach goes with the other goalie, now he doesn’t dare. This is your team, your series, your Cup to win.

The more you ride the ups and downs, the more amazed your teammates, the fans, the media, and you, are. There’s nothing you can’t handle.

Into the next series and into the next, you ride the scream. Like a cartoon character running off a cliff, you don’t look down. You just keep running.

Really, this has nothing to do with being a hot goalie. That’s the best thing about the playoffs. With defenders defending, with the burden and reward never being greater, this is a goalie’s chance to discover the best that is in him. To find out he’s better than he ever knew.

I don’t miss the regular seasons. I miss the playoffs.