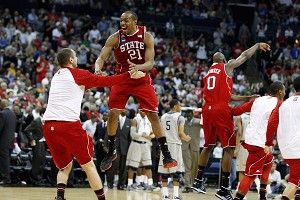 
Carolina advances to face Ohio on Friday night in St. Louis, but if you’re prone to extreme thinking, it’s awfully tempting to say that the Tar Heels’ title hopes are effectively over. At times this season, despite the wealth of talent on their roster, they’ve looked stationary and stagnant, and only Marshall’s incredible vision and passing ability could shake them from the malaise. Without his leadership, Carolina is a gun without bullets.