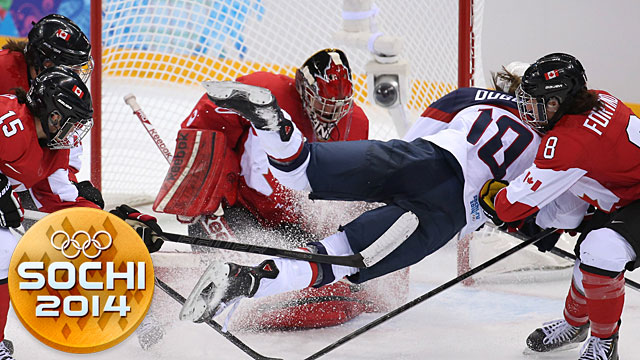 Kevin Dineen played for the Hartford Whalers in the ’80s and the Philadelphia Flyers in the ’90s. He finished his career in Columbus, home to Ohio State football. He was born in Quebec but grew up in Toronto. In other words, he’s certainly no stranger to the venom and vigor of competing against one’s worthiest adversaries. And now, as the coach of Canada’s women’s hockey team here at the Winter Olympics, he’s once again standing right in the middle of a quality blood-feud.

“I’ve seen lots of good rivalries,” Dineen said after his team beat the United States, 3-2, in their final preliminary-round game Wednesday. “I’ve been a Whaler playing against the Bruins. I spent five or six years in Columbus, Ohio, seen a little bit of Buckeyes-Michigan rivalry. Spent six years — well, I spent a lot of years — in New England, and I know Red Sox–Yankees.”

After being thrown into the mix just two months ago, when he was hired in December to replace Dan Church after Church’s abrupt resignation, Dineen has been behind the bench for four USA vs. Canada games. During his first, an exhibition in Grand Forks, North Dakota, that was part of the “Bring On the World Tour,” the two teams got into an all-out brawl.

“This one is the real deal,” Dineen said of the two teams.

The good news for women’s hockey is that the USA-Canada rivalry has undoubtedly elevated the sport. The 7,000-seat Shayba Arena was probably about 80 percent full for yesterday’s game; observers included 2010 figure skating gold medalist Evan Lysacek and numerous members of both country’s men’s hockey teams. Sidney Crosby sat in the crowd, and outside in the concourse, Jimmy Howard stood watching the game on a monitor near a concession stand. During one intermission, Kevin Shattenkirk’s parents chatted with a trustee from the U.S. Ski and Snowboarding Association. It was difficult to find a seat in the press box over an hour before puck drop.

Canadian flags were draped everywhere around the venue. (There were definitely some U.S. flags, too.) Throughout the game, dueling chants were constantly breaking out: “U! S! A!” and “Ca! Na! Da!” There were bells clanging and vuvuzelas vuvuzelaing. An innocent bystander who happened to walk in from the Olympic Park plaza would be forgiven for assuming he was attending the gold-medal game.

When the U.S. broke a scoreless tie with a few minutes left in the second period, I was shocked by how many American fans were in the arena. (The volume of Canadians didn’t surprise me; they always travel well.) Both goalies, Jessie Vetter for the U.S. and Charline Labonte for Canada, were having strong performances, Vetter stopping one stretch of several point-blank quality chances and Labonte robbing Brianna Decker on the doorstep with a glove save. Canada tied the game two minutes into the third — I noticed lots of Russian flags waving after that — and just over a minute later, took the lead on the sort of goal by Canada flag-bearer Hayley Wickenheiser that only added accelerant to an already fiery matchup.

The officials, to my eye, made two mistakes here: First, they blew the whistle too early; the puck had rolled under and behind Vetter and certainly should have been a good goal. But, having done so, they ignored that they had technically stopped play and allowed it to stand. In a conversation with ESPN.com’s Julie Foudy (who has seen her fair share of international women’s competition), a frustrated Hilary Knight asked the question: what kind of sport allows a goal to be scored after a whistle is blown?

“I did hear the whistle before the puck went in,” said U.S. coach Katey Stone, who also coaches the women’s hockey program at Harvard. “But more importantly, I said to our players, ‘Regardless of what happens, let’s be ready.’”

That’s not what the U.S. did; they seemed discombobulated after falling behind 2-1, and a defensive mishap led to a breakaway for Meghan Agosta-Marciano of Canada, who extended the lead to 3-1. (It was her second goal of the game on her 27th birthday.) Anne Schleper scored on a shot from the point with less than two minutes remaining to make things interesting, and a too-many-men penalty on Canada (a call officials missed earlier) gave the Americans an opportunity to pull their goalie and try to score six-on-four. But it was too little, too late.

The bad news for women’s hockey is how very likely it is that the gold-medal game that innocent bystander might think he was watching would be between these two teams. They remain as head-and-shoulders above the rest of the competition now as they were when the sport made its Olympic debut in 1998, and the discrepancy can cause these big international competitions to feel like everyone is dithering around a foregone conclusion. Sports Illustrated’s Michael Farber summed it up best yesterday when he tweeted: “To hell with the tournament. Make it a seven-game USA-CAN series for the Putin Cup.”

It’s not that other teams haven’t improved over the years; they absolutely have made leaps and bounds. Finland, notably, could absolutely play spoiler; they have the world’s finest female goalie in Noora Raty, who won back-to-back NCAA championships at Minnesota and has the capability to steal any game. (The Finns defeated the U.S. at the Four Nations Cup in November; they were outshot 59-16, but Raty made 58 saves.)

Following the USA-Finland game, Stone dispelled the notion that it was a U.S.-Canada tournament. “I can tell you that there are 21 players and four coaches in the locker room who don’t believe it’s a two-team tournament,” she said. “We believe very strongly this is a world event and anyone can win.” (Next to her, Finnish coach Mika Pieniniemi smiled ever so slightly and said, “Thanks.”) The problem, though, is that the two North American squads have also evolved alongside everyone else, growing impossibly speedy and skilled, neither of which narrows any gaps.

In reaction to this, hockey’s international federation changed up the tournament format after the last Olympics to make the competition more compelling. The new logistics place the four top teams — Canada, USA, Finland, and Switzerland, in this case — in one round-robin bracket, and the bottom four in the other. (Canada and the U.S. defeated the Swiss by a combined 13-1, and Finland beat them 4-3.)

The top finishers in the good group are ushered straight to the semifinals, while the others battle against themselves to earn the right to face them. USA and Canada players have said they like the format because it is good for publicity around the sport, and because they want to be playing the best competition possible.

In a 2004 piece for Esquire, Chuck Klosterman attempted to delineate the distinction between a nemesis and an archenemy. “You kind of like your nemesis, despite the fact that you despise him,” he wrote. “If your nemesis invited you out for cocktails, you would accept the offer … but you would never have drinks with your archenemy, unless you were attempting to spike his gin with hemlock.”

So are the U.S. and Canada the former or the latter?

“You always say, ‘Oh, they don’t like each other,'” Dineen said. “I don’t think that. I think there’s a mutual respect there. Sometimes to be really good, you have to have a foil.”

Ah, but that’s exactly what he would say. After all, according to Klosterman: “You hate your archenemy so much that you try to keep your hatred secret, because you don’t want your archenemy to have the satisfaction of being hated.”

The proposal would strike a major blow to up-tempo spread offenses that often run plays before the opposing defense is set. Coaches like Alabama's Nick Saban and Arkansas' Bret Bielema last summer said that up-tempo offenses are likelier to cause injuries for defensive players who can't get off of the field in time.

A Plan to Take Back the Curling Power: Let's Buy All the Granite