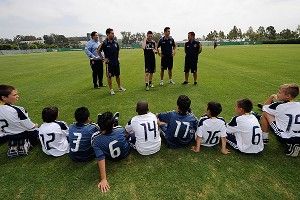 In the first of a series of posts on the future of soccer in the United States, Andrew Lewellen looks at the U.S. Soccer Federation’s efforts to centralize the development of youth talent. Check back next week for Part II, when Andrew takes a look at a pivotal moment in U.S. soccer history — the 1990 World Cup — and how it changed the trajectory of the sport in the States.

On a hot and hazy June Saturday in Los Angeles, two high-school-aged boys’ soccer teams are taking the field for their final regular-season game. One team is playing for the conference title. Sounds pretty basic. All across the country at this moment youth soccer teams are competing — kids in cleats and shin guards dribbling and slide tackling and yelling things like “Good ball!” and “Switch it!” while a team parent organizes a postgame snack of Capri Suns and grocery-store cupcakes.

But this game is different. The two teams are members of U.S. Soccer’s Development Academy. The game is being played at the Home Depot Center, and the complex’s 27,000-seat soccer stadium — home to Major League Soccer’s L.A. Galaxy and Chivas USA — towers in the distance. The home team, the one playing for the conference title, is the Galaxy’s under-18 academy side. If they win, they’ll advance to the national playoffs. If they lose, it will be the end of a season that began 10 months ago, in August. For all that time, the boys on both teams have trained four times a week, competed in one game a week, and played for no other team — not even their high schools. And that’s the way U.S. Soccer wants it.

In February, U.S. Soccer announced that it was extending the season for the roughly 3,000 boys playing on teams in its Development Academy from seven to 10 months. The federation divides the academy into three age groups, which they call zones: Zone 1 is ages 6 to 12, Zone 2 covers ages 13 to 18, and Zone 3 is for players over 18. For the teenagers in Zone 2, the Fed’s decision meant those boys could no longer play for their high school teams.

This new initiative is just one of the changes instituted in the academy’s short life, which U.S. Soccer formed in 2007 after a task force organized by its president, Sunil Gulati, identified the key changes in training required for American players to be on-par with their international counterparts: more training time, better coaching, an increase in “meaningful” games, and overall greater dedication to the sport. The academy now consists of roughly 80 clubs: private clubs and youth teams from the 17 MLS organizations. Two of the three Canadian MLS clubs, Montreal Impact and Toronto F.C., do not field academy youth teams; Vancouver Whitecaps F.C. does.

“It’s as close to a professional environment as you can get,” said Drew Murphy, a tall, freckled midfielder on the Galaxy’s youth team. “We train every day. We have amazing facilities.”

Murphy’s teammate, Grady Howe, said he enjoys the commitment to the team. “I think guys like me and Drew who are in here every day truly love it. Physically and mentally you’re always going.”

Before that Saturday’s game, Murphy and Howe had spent the week training with the Galaxy’s reserve team. Drew said the experience was “encouraging, because in a couple years … we know that we can be playing at that level.”

The fact that kids like Murphy and Howe can train with professional players is a significant change from the way things were for previous generations of American players. “Light years … we’ve made huge strides,” is how Taylor Twellman, an analyst for ESPN and the 2005 MLS MVP, described the recent progress in U.S. player development.

Ali Curtis, a former Herman Award winner (the soccer equivalent of the Heisman) at Duke University, MLS player, and current director of player relations and competition for MLS, agreed: “What U.S. Soccer is doing is phenomenal … Over the last five years, the way in which players are being developed, it’s been very refreshing and I feel fortunate to have been a part of it. Because kids are getting real opportunities that didn’t exist before. Honestly, I wish I was a 17-year-old now.”

When Twellman and Curtis were in high school in the ‘90s, no training option like the academy existed for the vast majority of players. In the ‘90s and early 2000s, an elite high school player would compete for at least four teams a year: a high school team, a club team, a state Olympic Development Program team, and a regional ODP team. The very best players also played on youth national teams. Those multiple commitments meant that players were coached by four or five different coaches and experienced as many different levels of competition and styles of play.

That model is in complete contrast to the youth programs of the world’s best soccer clubs. Take, for example, Barcelona, whose lauded youth program produced more than a half dozen players on the club’s 2011 Champions League–winning team, including Lionel Messi, arguably the world’s best player. The club has an academy for boys roughly ages 8 to 18, called La Masia. It provides education for students, along with some of the best soccer training in the world. The goal of this type of system is to train players in the club’s style, so that they can one day play for the senior team, or, at least, be sold to another club for a profit.

According to Tony Lepore, Development Academy director of scouting and coach of the under-15 national team, the academy aims to create a similar environment: “We’ve increased their training hours with a move to a 10-month season. There’s no longer a need for players to go outside of their club; it’s more of a one-club approach where one club can provide a program that is systematic.”

U.S. Soccer published a page of quotes from U.S. Soccer officials who support the move to a 10-month season, including USMNT coach Jurgen Klinsmann and U.S. youth technical director (and former national team player) Claudio Reyna. On the site, Klinsmann notes, “If we want our players to someday compete against the best in the world, it is critical for their development that they train and play as much as possible and in the right environment.”

But many involved in the sport in the United States know it will take time to create a training system on par with the best clubs in the world. Kyle Martino, an NBC analyst and the 2002 MLS Rookie of the Year, said, “Everyone wants to talk about the Barcelona youth system. They’ve been doing it for a hundred years. We’re really far off from that … the Najars [Andy Najar, a phenom who played for DC United Academy and won the MLS Rookie of the Year Award as a 17-year-old], the players who’ve come through these academy programs, that’s a big step for us.”

Martino also points out cultural differences that might contribute to the reasons parents in other countries allow their children to dedicate themselves to a single sport at such an early age while Americans are more reluctant: “In so many other countries,” he said, “going to college isn’t an option. They [kids] either play soccer or work in their dads’ industry.”

High school soccer, unlike almost every other American sport, has never really been recognized as an important playing-and-training environment. But still, even some former professionals don’t fully support the decision to prevent kids from playing for their school.

“For me,” said Martino, “there’s something so important to playing for your high school … people seeing you play on the weekends and then seeing them in school, the girl you have a crush on sitting up in the stands … That’s really important to being fulfilled. Will that make you a better soccer player? No. That’s the catch-22.”

Alexi Lalas, ESPN analyst and star from the ’94 U.S. World Cup team, described U.S. Soccer’s decision as “unfortunate,” adding, “I think the social tools you develop in [high school] … can not only help aid you in becoming a better person, but also a better soccer player. The experiences can be invaluable, and I worry that, for some kids, they may be dismissed too easily and quickly.”

Divorcing these young players’ athletic pursuits from their academic and social ones may already be having detrimental results for some kids. Eddie Soto, coach of the Galaxy under-18 team and an assistant coach at UCLA, a perennial college soccer power, said he wants all his kids to go to college. But some kids on the team who’ve been recruited by colleges don’t have the grades to get in. When asked why, he said, “We try to protect our players, but we have agents at our practices, we have agents at our games. It’s just a sign of the times … We put such high demands on these players. They’re here four times a week.” He said he’d ideally like the club to provide a tutor and have the kids come early so they could finish their studies before practice.

But Drew Murphy and Grady Howe haven’t put their athletic aspirations ahead of their academic ones yet. Howe, a senior, will attend UCLA this fall, and Murphy, a junior, has already committed to UC Santa Barbara, though he said that his goal over the next year in the academy is “to push myself into the first team, and if I do well enough to where I’m in the position where I’m offered a contract, that’s the way I’m going.”

Andrew Lewellen (@AndyHLew) is a former college soccer player who writes about the sport at AndysPitch.com.

The Crazy Drama of Ortiz-Lopez