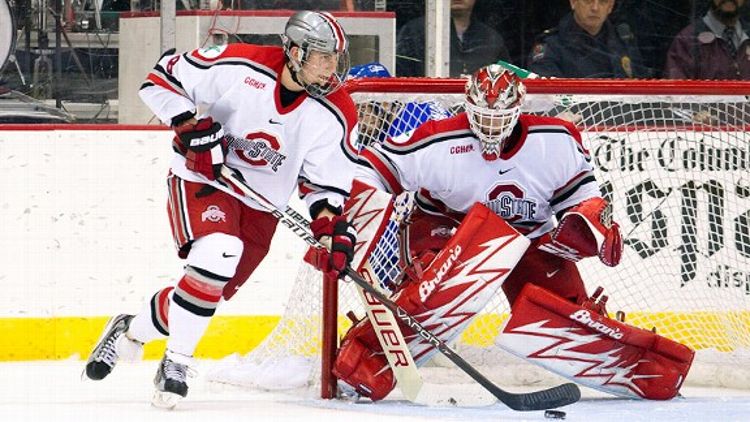 Their helmets are simple: silver, and bisected front-to-back by a black-and-white-framed scarlet stripe. It’s a scheme that has become eminently recognizable ever since it was debuted in 1968 for the football team at, as the cadence goes, THE Ohio State University. But the nationally ranked team sporting the iconic look this weekend, in a chilly outdoor game against heated rival Michigan in front of tens of thousands, won’t be playing the football that Ohio State is famously known for. They’ll be playing hockey.

On Sunday, Ohio State and Michigan will take to Progressive Field, home of the Cleveland Indians, for the Frozen Diamond Faceoff, another outdoor hockey game to add to a lengthening list that began with the 2001 “Cold War” between Michigan and Michigan State at Spartan Stadium and now includes other college hockey showdowns as well as flagship minor league and NHL events. The game will be a much-deserved showcase for an Ohio State team that has exceeded even its own expectations in the first part of this season, getting off to a 14-4-3 start (10-3-3 in CCHA conference play) and currently ranked No. 2 in just about every national college hockey poll.

“To be honest with you, I think we’re further along, record-wise, than we probably expected,” said Ohio State head coach Mark Osiecki in a phone conversation on Wednesday. “Certainly this is a rebuilding phase for us right now, and we’re in the middle of it. I think it’s been outstanding for some of our players to see these kinds of results from their hard work.”

The rebuilding phase for the Buckeyes is wholesale, from their players to their coaching staff to, yes, their helmets, which are new this season. (As with football, players can earn decals for meeting certain goals or for outstanding play.) The team has 12 freshmen and seven sophomores — eight if you count Osiecki, who is in his second season as head coach and has worked hard to implement a new culture for Ohio State hockey.

“The new staff preaches changing the culture here, making it a strong team year after year and always competing for the top spot in the CCHA,” said goaltender Cal Heeter on Wednesday as he walked from morning hockey practice to his afternoon classes. “I give a lot of credit to all the new guys this year for adjusting so quickly, and to the coaching staff for getting us ready and getting us to buy in to what they’re preaching.”

Heeter is just one of four seniors on this year’s team, the others being forward Danny Dries — who transferred from New Hampshire in 2009, is second on the team in scoring, and has written two very funny blog posts for The New York Times in advance of Sunday’s outdoor game — and captains Sean Duddy and Cory Schneider. (Heeter, who names Roberto Luongo as his favorite goalie, said that when the Canucks won last year’s Presidents’ Trophy and went on to the Stanley Cup Finals, teammates couldn’t help giving Schneider “a little bit of a hassle” for his name.)

Heeter’s play in net has been one of the biggest reasons for Ohio State’s first-half success. The St. Louis native leads the CCHA and is fourth in the country with a .932 save percentage, and his 2.02 goals-against average is one of the reasons why Ohio State has given up the fewest goals in the conference. He’s been named the CCHA Goalie of the Week twice this season and has earned a special mention for the conference’s delightfully titled Gongshow Goaltender of the Month honors in October, November, and December.

What’s more, he’s been noticeably maturing year by year, nearly doubling his minutes between his sophomore and junior campaigns while slashing his GAA by almost a full goal.

“The best thing with Cal is that he’s understanding now what it means to be a professional at this sport,” said Osiecki, who won a national championship as a player at Wisconsin in 1990 and had a six-year professional career himself that included time on several NHL rosters. “Coming in, I heard so many different stories that Cal didn’t approach the game the right way, that he couldn’t play back-to-back games on Friday and Saturday. And now he’s going on back-to-back years. My hat’s off to Cal for transforming.”

Heeter has worked closely this season with the newest member of the Ohio State staff, assistant coach Joe Exter, who is in his first season with the Buckeyes after working with the U.S. National Team Development Program. (Exter and Osiecki were both behind the bench when the U.S. won gold at the World Junior Championships in 2010.)

His own experience in net in particular has already made a difference in Heeter’s game, which will serve the undrafted goaltender well when he graduates as a free agent and attempts to fulfill a longtime dream of playing professional hockey. He has already caught scouts’ attention: Last summer, he was invited to the Chicago Blackhawks’ prospect camp.

“He does wonders with me personally,” Heeter said of Exter. “I can’t give him enough credit for this year. It’s not just on-ice stuff he’s helped me with, it’s off-ice stuff, my work ethic.”

It’s not surprising that Exter would be an off-ice inspiration. As a college goaltender himself at Merrimack, he made national headlines in 2003 when he was involved in a horrific collision with Boston College’s Patrick Eaves that knocked his helmet off and left him convulsing on the ice, his skull fractured and blood pouring from his ears.

He lay in critical condition in a medically induced coma for ten days, had to undergo therapy to relearn to speak and swallow — and then, unbelievably, came back to play two seasons of ECHL hockey. In a testament to how intertwined the hockey world is, one of Exter’s ECHL teammates was Ben Eaves, Patrick’s brother; their father, Mike, is the head coach of Wisconsin, where Osiecki was an assistant coach before coming to Ohio State.

“This experience taught me that the only thing you control is your work ethic,” Exter told Sports Illustrated in 2004.

Osiecki said that one of his biggest goals as coach is to preach that kind of dedication. “We’re asking for hard work: the competitive level, the maintenance of their bodies, taking care of the classroom,” he said. “The best way to put it is we want to be respected in every aspect of our lives on campus. We don’t want to be known as anything other than being first-class citizens.”

At a university where the culture is dominated by football and basketball, it’s not a given that hockey players would even be known at all. The team shares a huge arena with the basketball team, which in 2011 averaged over 15,000 fans per game; for hockey games, meanwhile, attendance this season has averaged around 2,300 fans. But that number is already sharply on the rise — in the team’s most recent home game, against in-state rival Miami (Ohio) back on December 9, attendance was reported at 4,450, and Osiecki said that in last weekend’s road tilt at Bowling Green the rink was split nearly 50/50 in terms of fans.

“Definitely I’ve noticed a change,” Heeter said when I asked if the atmosphere surrounding the hockey team has gotten any different. “We’ve always had our core group of fans that come to games, but our students have been fantastic — the support on campus has been increasing year by year.”

Hosting hated Michigan this weekend will undoubtedly drum up more interest. The Buckeyes and the Wolverines play indoors Friday in a game that will draw this season’s biggest crowds, and the two teams will face off again on Sunday in what should be a charged outdoor atmosphere at Progressive Field in Cleveland. “The height and awareness with this game is tremendous,” Osiecki said. “It’s great for college hockey and an opportunity to really sell the sport.”

Viewed from a certain angle, the game may feel slightly reminiscent of certain other Ohio State-Michigan battles: it was Michigan’s hockey helmets, which have the same famous winged design as their football players’ equipment, that inspired Osiecki to call for a switch to the traditional Ohio State look. But fans accustomed to watching football can expect a to see an Ohio State team that’s just as fierce, and even faster. And — at least so far this season — better, too.