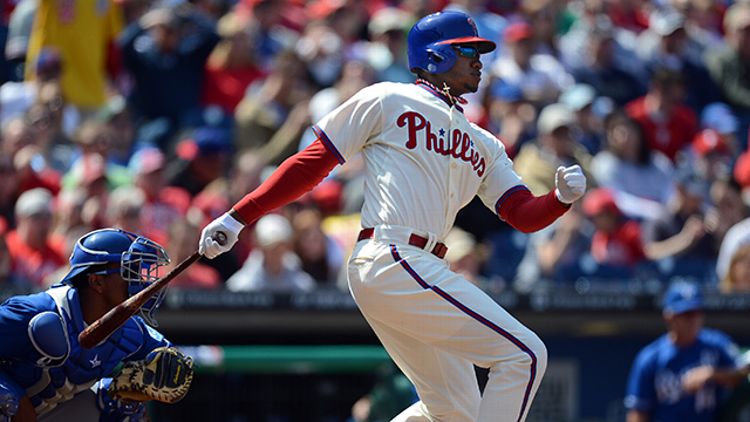 There might not be a more interesting and surprising story in the majors so far in 2013 than that of Domonic Brown, who enters June as baseball’s hottest power hitter. It’s a stunning turnaround for the Phillies outfielder, who was widely seen before this season as either a disappointing top prospect or a sign of Philadelphia’s propensity for jerking their young players around. After hitting .236/.315/.388 in just under 500 at-bats across three pro seasons, Brown has broken out in 2013. Well, let’s be more specific: May 2013. After a .233/.309/.372 April, Brown hit .303 with a league-leading 12 home runs in May. After hitting his 16th homer of the season on Sunday, Brown now leads the National League in home runs. He’s gone from being an afterthought — benched and demoted to give at-bats to the likes of putrid veterans Raul Ibanez and Juan Pierre — to being the guy keeping an expensive, underperforming lineup afloat.

Why are you yawning? OK, so you’ve probably heard the written-off-prospect-does-good story before. What’s truly interesting about Domonic Brown, though, is how he is accomplishing all this: utter transmogrification. He’s basically become a different hitter overnight, drastically changing his approach and, with it, his results.

To be specific, Domonic Brown has started swinging like somebody told him that you can’t walk off Hog Island. Through the end of April, Brown had exhibited a healthy amount of plate discipline and bat control as both a minor and major leaguer. In 589 plate appearances as a Phillies player, Brown had 60 walks and 110 strikeouts, very reasonable totals for a young player. In May, Brown struck out 21 times. He did not walk once. Think about that. The guy who was tied for the league lead in homers during the month didn’t take a single free trip to first. Brown was being “protected” by the likes of Erik Kratz and John Mayberry Jr. during May, and nary a single pitcher was able to pitch four balls past him. That’s not a change in approach. It’s a statement of intent.

Now, there’s not anything specifically wrong with not taking any walks. A misguided criticism of the sabermetric community within and around baseball is the idea that the obsession with on-base percentage helps produce passive hitters, guys who are more interested in drawing a walk than possibly producing a hit. Hell, Eric Wedge blamed sabermetrics for ruining Mariners second baseman Dustin Ackley just last week, out of the inarguable truth that too many players spend their time worrying about sabermetrics. It’s pretty silly stuff. The obsession with OBP is really a desire to avoid making outs via any means necessary, as it’s rather hard to beat a team that never stops batting. Passiveness isn’t a sabermetric virtue; the goal of any hitter is to get into hitter’s counts and mash hittable pitches in the zone. The nerdiest quant and the crustiest scout would agree there.

The good news is that Brown has definitely become more aggressive on pitches in the zone. As Baseball Analytics documented on Saturday, Brown is swinging at 76 percent of pitches within the strike zone this season, which is up from his previous major league career rate of 69 percent and well ahead of the league-average rate of 65 percent. Those pitches are being hammered at a much higher rate, too, as his slugging percentage on those swings has gone from a career rate of .447 to a whopping .713 through June 1.

So we know that Brown was swinging more and walking a lot less. When you look at what happened to the balls that Brown put in play, the numbers are even more staggering and weird. For a guy who hit 12 home runs, he sure hit a lot of ground balls; more than 51 percent of the pitches he put in play resulted in ground balls, well above the monthly league average for qualifiers of just under 44 percent. Line-drive classifications can be murky, but his line-drive rate was 17 percent, so it wasn’t as if he were hitting screamers out of the park.

Instead, 43 percent of the fly balls that Brown hit in May turned into home runs. That’s otherworldly. Miguel Cabrera had the second-highest percentage of fly balls go yard in May, and at 32 percent, he was as close to 23rd in the league as he was to first. There were only four players during the 2012 season who managed to put together a single month with an HR/FB rate above 40 percent. And before 2013, Brown’s HR/FB rate in the majors had just barely cracked 10 percent.

It’s safe to say that such a home run rate is unsustainable, if not lucky to begin with. The ESPN Home Run Tracker posits that six of Brown’s homers had “Just Enough” on them to clear the fence. That’s tied for the league lead. Brown even had a seventh homer that was considered to be lucky by virtue of the estimation that it would not have exited any other ballpark in baseball besides the place it was hit, Citizens Bank Park. Just two of his homers have been “No Doubters.” Those figures don’t suggest that Brown is a total mirage or anything, but it’s also not true that he’s turned into Jose Canseco overnight.

Finally, there’s one piece of medical information that might help explain Brown’s power breakout. Brown fractured the hamate bone in his wrist during a spring training game in 2011, an injury that sidelined him for the first month of that season and likely had long-term effects on his power. ESPN’s Keith Law has suggested that it takes prospects 12 to 18 months to regain their power stroke after a hamate bone injury, and Brown’s power numbers were markedly down at AAA in 2011 and, to a smaller extent, in 2012. Brown did show off some power (and a tremendous tattoo) in spring training, but then again, he also slugged .372 in 86 April at-bats this year before the change in approach and the power surge. Having a healthy wrist can’t hurt, but that seems unlikely to have been the primary driver of this home run rampage.

So what’s next for Domonic Brown? It seems foolish to try to predict Brown’s future right now; after all, who could have predicted all of this for Brown a mere month ago? His teammates attribute the success to changes in mind-set and confidence along with a slightly shortened swing. The numbers suggest that he has an impossible-to-sustain home run rate, and it’s hard to imagine that even the most aggressive hitting coaches would recommend that you go an entire month without taking a walk. Pitchers will adjust, and then Brown will make adjustments back toward being the more patient hitter he used to be. It doesn’t seem unreasonable to suggest that Brown could become a .280/.320/.480 hitter the rest of the way, something like a left-handed Nelson Cruz. That’s not exactly the home run king his May suggested, but it’s a worthwhile starter for a team that desperately needs talent. Then again, we’re only two days into June, and Domonic Brown already has a homer and a walk to his name (albeit an intentional one). At this point, it’s more fun to just sit back and watch baseball’s most surprising player do his thing.